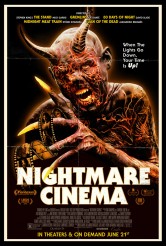 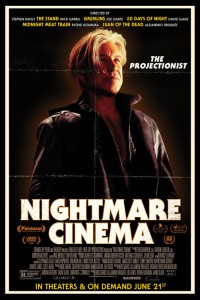 Low-budget but high-octane, NIGHTMARE CINEMA is one of the better horror anthologies to come along in a good while. Five disparate segments by five different filmmakers are linked by a creepy movie theatre, where patrons find significant events from their lives (and often deaths) up on the screen.

First up is writer/director Alejandro Brugues’ “The Thing in the Woods,” which is at once a loving homage to and hilarious send-up of slasher flicks, which takes an enjoyably insane turn partway through. 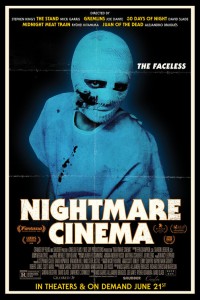 Next is “Mirari,” written by R.C. Matheson and directed by Joe Dante. This TWILIGHT ZONE-esque riff on plastic surgery offers a cautionary tale (beware of lovers who, however they couch it, don’t accept you as you are), a great visual punch line, and a sublime performance by Richard Chamberlain as the suave, charming surgeon.

“Mashit,” written by Sandra Becceril and directed by Ryuhei Kitamura, is impressively bonkers and atmospheric. However, it’s a bit of a letdown in that its central character, a priest played by Maurice Benard, appears to have no reaction one way or another to the results of his actions. It feels like he ought to accept or deny guilt. Since he does neither, the episode lacks the underlying kick that the rest have. 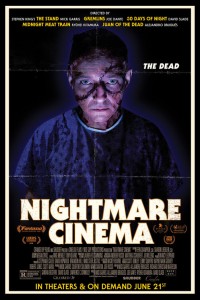 “This Way to Egress,” based on a novel by Lawrence C. Connolly, who scripted with director David Slade, makes up for this by taking us down an eerie rabbit hole that is largely defined by character. Shot in black-and-white, we’re with a woman (Elizabeth Reaser, superb) and her two children as she consults a doctor about certain recent changes she’s noticed. This segment gets more and more engrossing as it proceeds. When it ends, we’d actually like to spend more time in its unnerving environs. 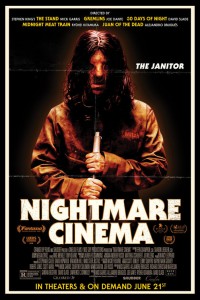 “Dead,” written and directed by Mick Garris, is a combination of the brutal and the Spielbergian. A young, talented teen (Faly Rakotohavana) develops an unusual ability after a near-death experience that is alarming for unconventional reasons. 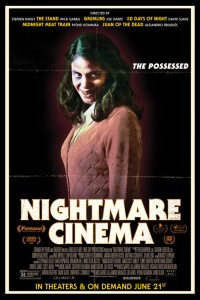 Garris also wrote and directed the wraparound and interstitial sequences featuring Mickey Rourke as a projectionist who projects menace of both the real-world and otherworldly varieties.

Additionally, Garris created the NIGHTMARE CINEMA project as a whole. It’s a marvelous grab bag of horror, a heady, bracing mixture of styles and concepts that has a lot for anyone who loves the genre. 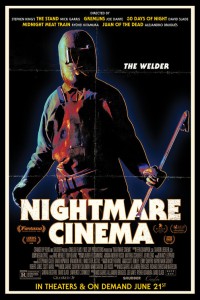