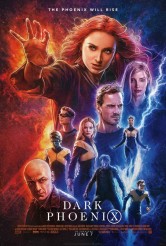 The middling apparent finale of the Fox X-MEN saga 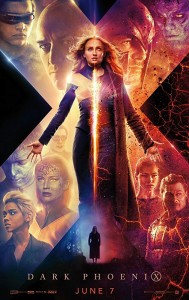 DARK PHOENIX is okay. If that sounds like less than a ringing endorsement, this is because the movie doesn’t hum with the invention and joy of the best X-MEN movies. On the other hand, it’s clear and coherent, takes on a few issues previously unmentioned in the film series, and has some action sequences that work very well.

Apart from THE WOLVERINE and LOGAN (which may not really count, as they weren’t strictly speaking, about the X-Men as a group), DARK PHOENIX is the first X-MEN movie without X-MEN in the title. This seems especially odd, as this is clearly part of the sequence of films that began with 2011’s X-MEN: FIRST CLASS, and continued with 2014’s X-MEN: DAYS OF FUTURE PAST and 2016’s X-MEN: APOCALYPSE. DARK PHOENIX is even meant to fit into the timeline of these other films.

Set in 1992, after APOCALYPSE, DARK PHOENIX takes place in a reality where the U.S. government is openly calling for help on the X-Men (and Women) team assembled by mutant Charles Xavier (James McAvoy). Charles runs a school for gifted (aka mutant) children, and helps them develop their abilities. Charles also steers those with particular gifts into acting as superheroes to help out humans. Charles says this is good public relations, and heads off the possibility of anti-mutant legislation. Some in his ranks, particularly the shapeshifting Raven/Mystique (Jennifer Lawrence), are beginning to suspect that Charles is enjoying his position, the attending publicity and his general power a little too much.

Speaking of power, while Charles is generally acknowledged as the most exceptional telepath on Earth, he sees great potential in his student Jean Grey (Sophie Turner). Charles brought Jean to the school when she was a little girl who has just caused a car accident that cost her both parents. Jean still keenly feels the guilt of this. Consequently, when there’s a NASA space mission crisis, Jean puts herself in harm’s way even more than her peers do to rescue the astronauts. This puts Jean in contact with a strange interstellar phenomenon. She comes home, but it becomes evident that something is happening to her. More, this has attracted some unwelcome attention.

DARK PHOENIX hews fairly closely to the formula that runs through its section of the X-MEN franchise. To state what that formula is would provide spoilers, but those who have observed the narratives of these films won’t be surprised by the broad strokes. This is more fun than APOCALYPSE, though not as enjoyable as the history-bending FIRST CLASS and DAYS OF FUTURE PAST. The main new twist is no longer taking Charles’s nobility at face value and exploring what he personally gets out of what he does. Due to the evident requirement to make time for things to explode on a regular basis, this doesn’t get the depth that it warrants, but at least it gives us something to think about.

On the flip side, several characters are motivated by love that in one case is news to us all, and in another hasn’t been evident for the last couple of films. A little more build-up here would have helped.

Scenarist Simon Kinberg, who has been a writer and producer on many of the previous films, makes his feature directing debut here. He contributes some memorable dialogue (Lawrence’s Raven gets a line that will likely be quoted). Kinberg  also handles the action admirably, finding something new and clever to do with the powers of metal-moving Magneto (Michael Fassbender).

Turner was in APOCALYPSE as well, but here she’s front and center. She does well with her troubled character and has a spot-on American accent, a world away from Sansa Stark. Lawrence stands out as the fed-up Raven and Jessica Chastain, rendered almost unrecognizable, is suitably icy as an antagonist. McAvoy shows commitment as the conflicted Charles.

DARK PHOENIX probably won’t be anybody’s favorite X movie, but for those who are jonesing for anything in this universe, it covers all of its bases well enough. If DARK PHOENIX really is the end of the franchise under the 20th Century Fox banner, though – and the lack of a post-credits sequence suggests this is the case – it’s not going out with a bang.