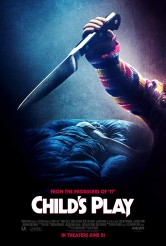 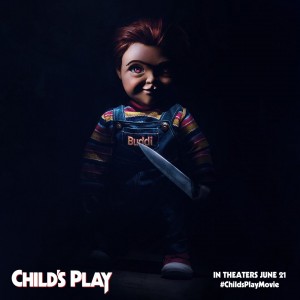 Granted, this edition gets off to a shaky start, with an unnervingly large and creepy Buddi doll being sold in a TV ad by an entrepreneur of extraordinary smarminess (Tim Matheson). You can’t believe anybody would buy anything that this guy recommends. Even more, you can’t believe anybody would buy that Buddi doll from anybody. (Malala Yousefzai, Bill Nye and Willie Nelson could get together to pitch it, and it would still be a solid “no.”)

CHILD’S PLAY quasi-dodges this issue for the main characters by having the doll acquired not because a child is clamoring for it, but because overworked mom Karen Barclay (Aubrey Plaza) misunderstands her tween/teenaged son Andy’s (Gabriel Bateman) interest in it.

Andy thinks the Buddi doll is kind of a hoot precisely because it is so bizarre, what with its slightly disproportionate features, weirdly articulated face and ability to be a whole-home control system. Andy and Karen are both unaware that there’s something wrong with this particular model of Buddi, who dubs himself Chucky and wants to be Andy’s very best friend.

In this version, Chucky is different because of techno-sabotage rather than voodoo possession, which raises some questions that go unanswered. This aside, writer Tyler Burton Smith and director Lars Klevberg play with the notion that Chucky starts out as a childlike innocent, programmed to bond with his child, who is set on a dark path by Andy. It’s not that Andy is malicious, it’s just that he has no concept that what he says and feels, perfectly normal for a young teen, are misinterpreted by Chucky, who has the ability to act on these notions.

For awhile, CHILD’S PLAY actually seems to be working the metaphor of how parents and older children can carelessly shape the minds of youngsters (for instance, maybe don’t show them graphic horror movies and treat these as comedies). Director Klevberg also scores with a jump scare of a type that this viewer, at least, hasn’t seen before. (To describe it would ruin it, but it’s clever.) The movie also shrewdly sets up the first couple of human victims as people revealed to be so awful that, while nobody deserves the extended punishment Chucky dishes out, we’re not exactly sorry to see them go. Points are lost for an animal killing (obvious, and also, stop it already).

It’s not clear how we’re supposed to take of Chucky’s third victim choice on a number of levels. This is where Chucky transitions from doing what he thinks Andy wants to acting out of jealousy, and it’s here that CHILD’S PLAY seems to snap back from doing something interesting to doing what’s expected.

Unconventional characters and casting work in favor of the new CHILD’S PLAY. Plaza is inspired as Andy’s loving but distracted mom, who is not a stereotypical horror movie parent, but rather the star of her own indie character study here. Likewise, Brian Tyree Henry stands out as friendly cop Mike, a big softy who shares much of his time with his mother (Carlease Burke). Bateman is solid as the sensitive Andy, and Mark Hamill nails it as Chucky’s voice.

The set-up is here for a big action finale, but there are so many moving pieces to it (literally and figuratively) that it’s hard to figure out how and why certain things are happening. We can’t even tell if we’re supposed to understand this, or just go with the flow. 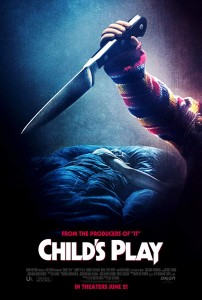 Additionally, every time we’re reminded that the Buddi doll is a hit as both a toy and a whole-home control system, we get yanked out of the movie by disbelief. Since Karen and Andy live in a decidedly low-tech, shabby apartment, they don’t have much of a whole-home to control, which makes this plot thread even less necessary. (Everything Chucky does with this power he could accomplish by other means.)

CHILD’S PLAY experiments with a few new things that work, but it can’t quite succeed at getting its thoughtful side to merge seamlessly with its retro camp horror side. It certainly is an odd bit of timing for CHILD’S PLAY to be released on exactly the same day as another, albeit dissimilar, toys-and-their-kid story, namely TOY STORY 4. Another scary doll movie, ANNABELLE COMES HOME, is due out next week, doubtless different from this week’s offerings. People who like movies about playthings have a lot of options right now.