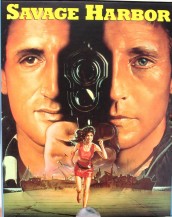 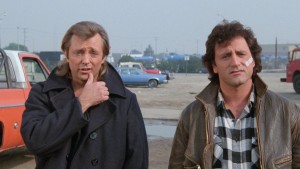 We’re currently in a renaissance right now on Blu-ray where the studios have given up on digging into their archives for extensive and consistent Blu-ray reissues and remasters, while companies like Severin Films, Shout! Factory, Synapse, Arrow Films and Vinegar Syndrome are giving known, unknown and forgotten exploitation from the 1970s, 1980s  and 1990s their due long-awaited due.

With stellar remasters and great supplementary features, an important part of genre history is being preserved with these films Vinegar Syndrome is now extending their reach  by exploring forgotten straight-to-DVD releases.

With VSA (Vinegar Syndrome Archive), they are taking a chance on films that genre fans should see, but may not fit with their general monthly releases. During their Halfway-To-Black Friday Sale, they unveiled the first two movies in this series: 1987’s SAVAGE HARBOR (aka DEATH FEUD) and 1977’s EVIL TOWN. Both movies are limited editions – only 2,500 per title (which also includes a hard-shell bottom loading case and a folded bonus poster inside) and the promise they will only available on their website and through brick and mortar mom and pop shops.

If you watch the trailer (see link at the top of the page), SAVAGE HARBOR is a gloriously over-the-top, terribly made action film starring Frank Stallone, but it’s also highly addicting and enjoyable for fans of these kinds of movies. The selling point at the time, of course, is Frank Stallone looked so much like his more popular brother Sylvester, that they could crank out these low budget lookalike movies and people on home video might be duped into thinking they were getting a new Sly film (the poster art for SAVAGE HARBOR is incidentally a dead ringer for brother Sylvester’s 1981 cop flick NIGHT HAWKS). 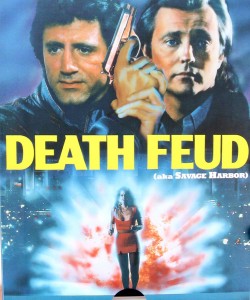 However, there is something charming and quaint about SAVAGE HARBOR. Stallone and Christopher Mitchum play merchant seaman Joe Hardwell and Bill, respectively, who end up in San Pedro on leave. Both fall in love. Joe with Anne (Karen Mayo-Chandler). The problem is she’s the property of a thug who keeps her drugged up and prostituting herself, but Joe releases her from this hell and they fall in love. Meanwhile Bill falls for the stripper at the local bar he frequents.

Trouble strikes, when Anne’s boss finds her, kidnaps her and gets her drugged up again while Joe heads back to sea. When he returns, she’s missing and the rest of the movie becomes his bizarre, fragmented and at times non-sequitur search for Anne.

What’s so bizarre about this film (and actually part of its allure), is having two action heroes who aren’t really cops even though they act like it. They bumble around, get into fights that they sometimes lose but when it’s time to go full vigilante, Joe goes full Cobra on everyone.

Structurally the film is real batty as well. It doesn’t  know what it wants to be at any given moment. Writer/Director Steven Monson doesn’t even have a basic understanding of how scenes should flow together. Time doesn’t exist in this movie – scenes go from day to night in an instant and several weeks seem to fly by at lightening speed, but then it cuts away to something going on with Chris and it literally feels like the story we’ve seen up until that point was only one day.

The film also has an obsession with avocados. I’m not sure why Joe’s character talks about them so much, maybe it was something Monson thought was really funny, but they run the gag so far into the ground that it becomes another infectiously ridiculous and entertaining aspect of the film that’s hard to hate. 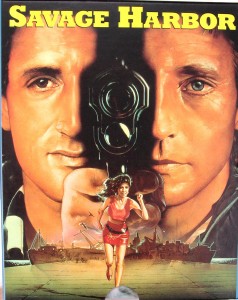 The special features include a rather candid interview with Stallone who admits what a turd SAVAGE HARBOR is. He remembers the film pretty well, and he admits it was a bit of a cash grab. However, his honesty and candor about the making of the movie is just as fun as watching the movie. He’s having more fun and is more grounded in the interview than in the actual film.

I’m real curious to see what else VSA has in store. If SAVAGE HARBOR and EVIL TOWN are any indication, there’s a whole other world of unsung and forgotten low-budget movies that’s going to finally get their day on Blu-ray and I’m glad Vinegar Syndrome is leading that charge.