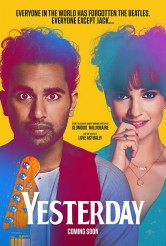 A rose by any other name might not be a Beatle, YESTERDAY notwithstanding 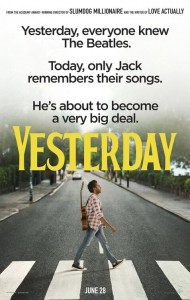 As anybody who has seen the trailer for YESTERDAY knows, we are in a world where, suddenly, Jack Malik (Hamish Patel) is the only person who remembers the Beatles and their music. Jack is a mostly unappreciated singer/songwriter in England; he has a day job in a warehouse that he hates. Jack’s loyal manager/roadie Ellie (Lily James) is sure that stardom waits just around the corner, but Jack is so discouraged that he declares he’s hanging up his guitar. Then there’s a brief worldwide blackout, and Jack gets hit by a bus.

As Jack recovers, he finds that everything is normal – except that the Beatles (and a few other things) now exist only in his memory. A Google search yields only beetles of the insect kind. When Jack starts playing Beatles songs, everybody thinks he is the songwriter. Jack doesn’t correct them. He starts on the road to fame, but is very torn about taking credit that he knows isn’t his.

There are some very funny, charming elements in this game of “What if,” but, at the risk of taking something meant as a lark too seriously, it raises a lot of questions. If Jack were dreaming, we could chalk it up to dream logic, but that’s not the case – this is a fantasy story, not an extended hallucination.

We’ll accept that YESTERDAY never attempts to investigate how any of this happened. But even with that suspension of disbelief as a given, the premise then goes on to assert that the Beatles songs could have been introduced by, well, Jack, and he’d be just as successful as the Beatles were. In fact, the Beatles did sell songs to other artists and those songs were hits for those who performed them, but those other artists never became the Beatles. Yes, Jack does have the advantage of electronic media on his side in terms of publicity, but it seems like throwing shade on John Lennon, Paul McCartney, George Harrison, and Ringo Starr to suggest that anybody else doing their songs would be just as popular. YESTERDAY is clearly meant as a love song to the Beatles. It’s obvious no insult is intended, but we can hardly avoid pondering the issue. 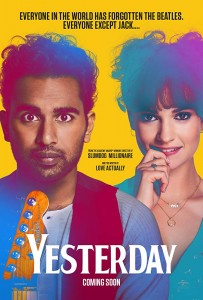 For that matter, after going to the narrative trouble of removing the Beatles from history, YESTERDAY then leaves the world exactly as it otherwise is. We don’t need civilization to have reshaped itself into BLADE RUNNER, but this qualifies as real contradiction. On the one hand asserting it’s a matter of urgency that the Beatles’ music is heard worldwide, while on the other hand demonstrating that nothing would be different without it, creates a headache-inducing paradox.

Jack’s character is all over the place. We’re meant to be rooting for him, but he sulks a lot and is ambivalent about stardom. This might have been the basis of a good character study – actor Patel is able to convey a great deal of complexity – but the script doesn’t want to show Jack having a good time. (This may give viewers flashbacks to the less effective parts of BOHEMIAN RHAPSODY.) If we saw genuine ambition in Jack, we’d understand why he claims the songs are his, but because he’s so diffident about what he’s doing, again, it seems like he could easily name the songwriters, even if no one else knows who they are. Patel is a good performer, and the songs are powerful, but he’s seldom allowed to show joy in sharing them.

Then there’s the love story between Jack and Ellie. He’s ungrateful and undemonstrative; she seems to have no personal ambitions beyond helping him. To say it’s hard to be invested in whether they’ll ever get together is putting it mildly.

Ed Sheeran, playing himself as someone who envies what he believes is Jack’s amazing songwriting talent, is fine in his role. It’s a little weird for the script to have Sheeran verbally flagellate himself for not being as great a songwriter as Jack, i.e., the Beatles. Unless Sheeran has engaged in a fit of real-world egomania that requires onscreen penance (this reviewer hasn’t heard of it, but anything is possible), this seems a bit extreme.

On the bright side, Kate McKinnon is expert and hilarious as Jack and Ed’s venal manager, who says almost everything that occurs to her. Director Danny Boyle’s eye for composition remains reliable, ensuring that YESTERDAY is handsome and well-made. And of course, it’s great to see and hear so many Beatles classics being performed.

Even so, YESTERDAY could conceivably cause a reviewer to launch into a rant.