The EP talks about the CBS All Access series 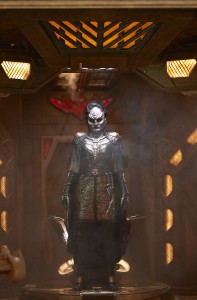 Heather Kadin, one of STAR TREK: DISCOVERY’s executive producers (she’s also on PICARD and LOWER DECKS), talks with us about Seasons 1 and 2, and a very little bit about how the spinoff may affect Season 3. She also discusses SHORT TREKS, the STAR TREK: DISCOVERY-related short films on CBS All-Access.

ASSIGNMENT X: What is the division of responsibility between you and your fellow executive producer Alex Kurtzman, who co-created the series and also directs, on STAR TREK: DISCOVERY?

HEATHER KADIN: No. I’m a non-writing EP. I run Secret Hideout TV, and I’ve worked with Alex at ALIAS, where I was his exec at ABC. And so I produce everything that Secret Hideout does.

AX: After the success of STAR TREK: DISCOVERY Season 1, were you concerned about Season 2? Some shows go through a sophomore slump …

KADIN: I’ve worked on a lot of those shows [laughs]. No. I think because the [Season 1] story of the war was so specific, and also heavy-handed, in the way any story about war would be, there’s a darkness over you – this season we were allowed to have more fun and play. And I think there’s a lot more humor, there’s a lot more character, so I think fans may even like it more. We’re really happy with it. 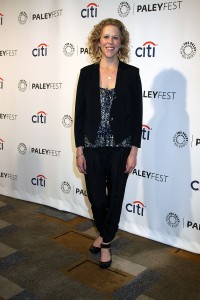 AX: Why do you think some shows have a successful first season, and then kind of drop the ball going forward?

KADIN: Because making TV is really hard, and I think a lot of times, when you’re doing, especially, a serialized show, not to say, oh, my God, you have all of your great ideas in the first season, of course not, but I think a lot of great ideas you’re using in the first season, and then a lot of times, it’s just hard. I don’t think it’s a specific thing, and I think some shows don’t have that problem at all. Some shows are better in the second season than they were in the first. I think it also depends, did you have the right writers, did you add an actor? There are just so many factors. Where are you shooting? There is just a lot at play. I wish it was more definitive, because then we would avoid it [laughs].

AX: Are you guys having internal debate about how much to use Michelle Yeoh in Season 3, because they’re spinning off her character?

KADIN: We want to use Michelle Yeoh as much as possible. Our plan is, she’ll be used throughout Season 3. The spinoff wouldn’t happen until after that.

KADIN: Or in the middle of Season 3, let’s say, but we have every intention of using her – you’ll see her all of this season, and then most of next.

AX: Can you say if we’re going to see any more of the mirror universe that her character, Philippa Georgiou, comes from?

KADIN: There’s not a plan for it right now, but things can always change. 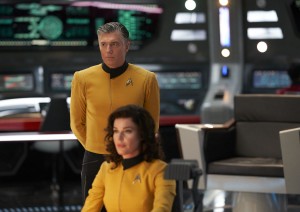 AX: Can you talk about Doug Jones and his character Saru? Has Saru popped a little more as a character than you expected initially?

KADIN: Doug Jones is a miracle, as a human, as an actor, on and off camera. He’s amazing. And I think so much of what went into that character originally was concept design, and because it took so much time to come up with, what is that character going to look like? The dream was to cast Doug Jones, and then the fact that he accepted, but you still never know how is it all going to go? And being on set that first day of the pilot, he immediately brings so much life and humor and love to it. It’s really special.

AX: Since Doug Jones has years and years of playing characters in heavy makeup, have you the producers specifically asked him to talk to some of the other actors who have heavy makeup and don’t have his years of experience, or does he just take it upon himself to do that? Because I understand that he goes to some of them and says, “Oh, you have to be in that makeup, and here are some tips on how to cope …”

KADIN: He’s that person you don’t have to ask. It’s like Alex said, all of our actors are empaths. He probably would notice on his own right away if someone was having trouble with it, and would on his own think to go speak to them. But no, we’ve never had to say to him, “Hey, could you help that person?” Really, one of our main characters who’s on camera – no one is in as much makeup for as long a period of time as Doug.

KADIN: Yes, I guess in that case, they were all in it at the beginning. And we have great photos that have leaked – I’m sure you saw, during shooting Season 1, where all of our Klingons were sipping smoothies. We had to bring in a special chef, when Klingons are on set, to make smoothies and stuff. So that leaked and it took a little of the magic out of it, but … [laughs]

AX: The Season 2 opening episode has a huge action sequence in a debris field. Was that a way of showing the audience what to expect in terms of Season 2’s scope?

KADIN: It was. And from the beginning, I hope that fans have felt that we’re trying to blur the line between features and TV, visually, with our score, with our costumes, with our sets. What we’ve created, and what we and every person on the crew have done to make each individual thing, it’s mind-blowing. You can’t ever just shoot down an alleyway when your set’s being built. It feels like a movie. It feels like a movie when we’re on set, and that sequence in particular, I think, really spoke to who Alex is as a filmmaker, because it’s in that tone of, it’s fun, it’s emotional, it’s action. So yeah, it was intentional.

We did the premiere in New York, and obviously when you do something like that, you’re doing it on a movie screen. You’re spoiling yourself and any fans who are there. I had some family friends there, and they were like, “Oh, my God, there were some episodes last year I watched on my phone. I’m never doing that again.” When I hear about people watching it on their phone, I just want to cry, because we’re shooting anamorphic, and the sound mix and all of that that there’s no way you’re getting on your phone.

What was even more amazing was watching it with the actors, because of course, when they filmed that sequence, there was none of that. They’re just like, “Turn left! Turn right!” And I think for them, to see everything that Jason Zimmerman, our unbelievable visual effects supervisor/producer did, it’s incredible. If you saw the original footage, it’s nothing.

AX: With the visual effects aspect, do you feel like you have a better sense in Season 2 of when to use it and how much to use it for certain sequences, knowing when to go big on a particular element, versus keeping it small?

KADIN: For sure. And I think there are certain sequences designed from the beginning that were always a huge visual effects sequences. There are some sequences, like in the first season, when the space whale comes and Rainn Wilson jumps out, there’s a space whale that we had built that you’ve never seen, because then we CG’ed over it. That’s a perfect example of, “Oh, crap, I think we need visual effects to step in,” because by no fault of anyone, you’re on a TV show, you’re moving, moving, moving, and things don’t always turn out the way you want them to, and then everyone pitches in, and it ends up looking amazing. 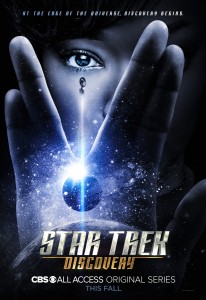 KADIN: It’s not any less serialized. We have the ability to go off-ship a couple more times. Just by the nature of a second season, you’ve found your footing and you know what works and what doesn’t work. But I think there’s just as much serialization.

AX: Following on that, what do you think didn’t work in Season 1? Just in terms of what worked and what maybe worked less …

KADIN: It’s so hard, because we’re there as things are getting made, and on any show I’ve ever worked on, the episode that we know is the most problematic, like, “Oh, my God, we shouldn’t air this episode, we should dump it,” we end up throwing a ton of resources at it, and that ends up becoming a fan favorite. And so I feel like what’s tricky is, probably something that you might have witnessed as something that wasn’t great might be different from what I thought. I don’t know, I’m really proud of it.

AX: What was the most challenging episode at your end?

KADIN: The most challenging episode was Episode 8, where we went down to that planet, and unfortunately, by no fault of anyone involved, the characters didn’t look like we wanted them to look, the lighting was the way we wanted, and it just almost looked like we had shot it many years ago. It didn’t look like what we had established for that show, and so again, Jason Zimmerman and Alex went in and CG’ed what you see on that planet, and it made such a difference. And again, it’s never our actors, it’s never the direction, because we have incredible groups of people. Sometimes it just doesn’t work out. You see something on a model, and then you get it on the day – you’re like, “That doesn’t really look the way we thought it was going to look.” So you fix it.

AX: The SHORT TREKS segment “Calypso” was set a thousand years in the future. Will we see more of that, or was that one and done? 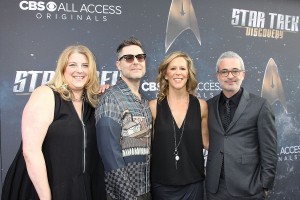 KADIN: The idea with the SHORT TREKS, it’s funny, because originally, you had people like Michael Chabon saying, “Oh, my God. I’m a huge STAR TREK fan. I’d love to do something.” “Oh, hey, you could write a short. And it was such a gift. The idea originally, I think, was just to tell these standalone stories that, in themselves, would be their own thing, and then the more in love with each one of them we became, the more we decided we really wanted to use them. And you’ll see a lot of that coming through at the end of our season [2]. We definitely want to deal with that story in particular down the line, and especially with that actor, Aldis Hodge. He was magnificent. So you’ll see sometime down the line, for sure.

AX: And what would you most like people to know about Season 2 of STAR TREK: DISCOVERY?

KADIN: We did get criticism [about Season 1] that the show was darker than they wanted, and it wasn’t as open to fans who had come before and appreciated certain things about STAR TREK, and I think it is happy and fun and we really get to be with our characters, and there’s a lot of emotion.

This interview was conducted during CBS All-Access’s portion of the Television Critics Association (TCA) press tour.