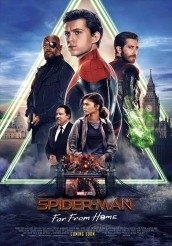 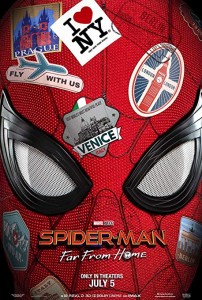 SPIDER-MAN: FAR FROM HOME is in the unenviable position of picking up the Marvel Cinematic Universe timeline only three real-world months after the hugely emotional AVENGERS: ENDGAME. ENDGAME was presented as such a finale that it didn’t even have the customary Marvel mid-and-post credits sequences. Following that act is a great responsibility, whether it comes with great power or not.

This means that anybody worried that the new film will blithely traipse off on holiday with no scars of loss and time displacement can relax, as Peter Parker (Tom Holland) has a walloping case of survivor’s guilt. The Blip is now the popular term for the event that caused half the world’s population (including Peter and much of his high school class) to vanish for five years and then return the same while the other half of the world had moved on for five years. We know that Peter got blipped back at the right moment to help the Avengers with the enormous battle that concluded (well, sort of)  ENDGAME. Far from feeling heroic, however, Peter blames himself for not saving his mentor/father figure Tony Stark (Robert Downey Jr.).

All Peter wants to do is act like a normal high school kid, go with his class on their summer field trip to Europe, and tell his cool, smart classmate MJ (Zendaya) how he feels about her. So when first Tony’s best friend Happy Hogan (Jon Favreau) and then the formidable Nick Fury (Samuel L. Jackson) tell Peter he’s needed in the field, he is reluctant. Peter is very relieved when the Avengers-like Quentin Beck, aka Mysterio (Jake Gyllenhaal) shows up to handle things more or less the way Stark’s Iron Man would have done.

Those familiar with Marvel’s comics will be much quicker to see where this is going than those of us with less education in that area, although the screenplay by Chris McKenna & Erik Sommers makes some clever tweaks to the mythos that tie things together to better fit the MCU. It probably isn’t too much of a spoiler to say that Spider-Man can’t stay out of the fray for long.

SPIDER-MAN: FAR FROM HOME maintains a mostly upbeat tone, while still tackling a lot of heavy questions. These include what is one’s duty to the world, and to a parent figure’s legacy, how can one remain true to oneself in the face of these, as well as, exactly what is an Avenger? The movie ponders this a lot without coming up with a definitive answer – the post-credits sequence sheds light on the precise nature of this evasion. (There’s also a mid-credits sequence that is of some importance.) Poor Peter is in Stark’s shadow everywhere he goes.

Viewers may be split on the handling of the loss of Iron Man and other key figures who left us in ENDGAME. On one hand, SPIDER-MAN: FAR FROM HOME is all about Peter coming to terms with who he is post-Tony Stark. On the other hand, some audience members who still are processing their own feelings may find some of the efforts to lighten this up too much, too soon.

Holland remains an appealing lead, and Zendaya gets to shine here more than she did in the previous outing. Favreau is sweetly earnest and Jacob Batalon is once again great fun as Peter’s best friend at school. Jackson of course is everything Nick Fury should be, and the movie gets a shout-out for finally letting Cobie Smulders’s Maria Hill in on the action.

The overall tone in SPIDER-MAN: FAR FROM HOME is more in keeping with, say, ANT-MAN than AVENGERS, but with a more thoughtful side. Mostly, it’s fun that doesn’t demand a blip-like mind-wipe from the audience, for which we are duly thankful.