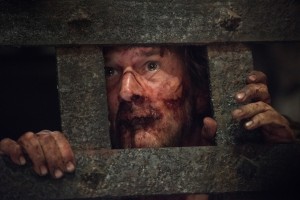 The SUPERNATURAL episode “The Thing” is actually less like THE THING than it is a riff on H.P. Lovecraft’s Cthulhu mythos. It ties in nicely to the scavenger hunt for rift-opening objects that’s been running through much of Season 13 and, bonus, we get Archangel Gabriel (Richard Speight Jr.) back, who has been a wonderfully fun character in his guises as the Trickster and Loki.

In 1925 Rhode Island, a young woman, Sandy (Magda Apanowicz), is seemingly sacrificed in a ceremony involving chanting men sporting pentagram-plus symbols, lots of chanting, and a huge tentacle that descends from a rift in the ceiling.

In the present, Sam (Jared Padalecki) and Dean (Jensen Ackles) are still searching for ingredients to open the rift to the alternate universe where their mom and Jack are trapped. They need the Jewel of Solomon, which one of their reference books describes as being “of the cosmos.” That’s not really helpful. However, Sam finds a Solomon file that mentions a Men of Letters outpost in, you guessed it, Rhode Island.

Sam and Dean get to Rhode Island, find the outpost and start poking around. Then they hear cries for help. Sandy is still trapped to the sacrificial table in the outpost, evidently alive and well and not aged a day. Once the boys ascertain Sandy’s identity, they do their best to help her cope with the time change, so to speak, get her some modern clothes and take her for a meal at a local diner.

Bad news: the cook Marco (Ivan Wanis-Ruiz) is part of the sacrificial cult and recognizes Sandy and the Winchesters. He makes a call.

Meanwhile, down in Hell, Prince of Hell Asmodeus (Jeffrey Vincent Parise) is draining grace from his captive archangel Gabriel. Asmodeus is also treating treacherous British Man of Letters Arthur Ketch (David Haydn-Jones) like a delivery boy, which isn’t going over well. Asmodeus eventually beats the crap out of Ketch to teach him a lesson. The lesson Ketch learns may not be the one Asmodeus intended. As soon as the Prince of Hell leaves the room, it occurs to Ketch that Gabriel’s power might be useful. Even though the archangel at this point is so scared he resists, Ketch rescues Gabriel from his cell and hauls him out of Hell.

Marco puts something in the food orders of Sam, Dean and Sandy. Sandy goes to the bathroom and Dean is talking, so only Sam actually eats. As Dean realizes his brother has been drugged, the diner is surrounded and invaded by robe-wearing cultists, who kidnap Sam. Dean is almost killed, but Sandy stabs his attacker. Dean and Sandy are left in the diner with two waitresses and a scared customer. Dean takes a gun off of the dead robe-wearer, and sees that the corpse is a cop.

Outside, Sam comes to – and finds out the robed cultists are actually the good guys. In a great hairball of exposition, Marco and his sister Ophelia (Tiffany Smith) explain that they and the other enrobed people are the descendants of some rogue Men of Letters from back in the day. Their grandfather came back from WWI so demoralized that he wanted to wipe out our world and let some other world start over. He and his cadre kidnapped Sandy and opened a rift to another universe, letting a tentacled elder god through. It took Sandy as its vessel. The rift was closed before the god’s mate could come through. The people responsible for this debacle were kicked out of the Men of Letters, and the outpost was closed. However, it was necessary to keep the elder god chained up and unfed, because once it feeds, it’s unstoppable. The only thing it does is eat and breed. 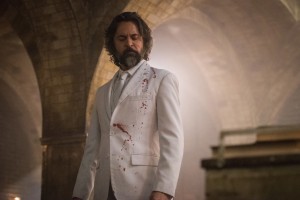 Wait, are we losing Dean? Don’t be silly. Like many other monsters before her, Sandy wants Dean for his body. Well, actually, she wants her mate to inhabit his body, as she explains while she’s got Dean chained to the sacrificial table. Since she and her mate have just about consumed their own universe, ours seems like a nice new neighborhood for them to eat and spawn in. Sandy is using the Jewel of Solomon to open the rift when Sam rushes in with Marco and Ophelia. Sandy cannot be killed, but Dean is able to pick the lock of his chains and free himself. Once he’s off the table, Sandy’s elder god mate can’t get into Dean’s body. The mate therefore grabs Sandy and brings her back to their original alternate universe.

So the guys now have the Jewel of Solomon. Ophelia tells them that it will only keep a rift open for twenty-four hours. She knows this how? Don’t ask this episode, it won’t tell you.

Sam and Dean return to the bunker. They’ve now got everything they need to get to the alt-universe where Jack and Mom are stuck. Well, almost everything. They don’t have the grace of an archangel, but how are they going to get that? Enter Ketch, who’s been waiting in the shadows, with Gabriel in tow. The Winchesters are equally shocked by Ketch’s gall at expecting their help and at the appearance of the badly battered Gabriel, since they saw him die years earlier. “Or did you?” Ketch asks rhetorically.

Ketch has a proposal. He needs the Winchesters to protect him from Asmodeus. In return, he’ll help them with whatever they need, starting with getting some grace from Gabriel.

Sam unsews Gabriel’s lips (ouch). Dean declares that he is going through the rift without Sam. Ketch wants to go with Dean. Since Asmodeus will be hunting Ketch to the ends of the Earth, it’s probably better for Ketch if he’s actually on a different Earth. Dean says okay. Sam is outraged. Dean explains that he doesn’t care if Ketch dies, but Sam has to stay behind, so in case Dean needs rescuing, Sam will be available to do it.  Sam reluctantly agrees to this logic.

On the one hand, melding SUPERNATURAL and the Cthulhu mythos seems like a natural crossover. The Winchesters hunt monsters, and the Cthulhu mythos is full of monsters, right? The trouble is, those monsters are mostly gods, and there are only so many times the boys can tangle with those before jeopardy loses all meaning. “The Thing” handles this just about right, setting up circumstances where, so far as it goes, the elder gods have the upper hand and simply leave, rather than suffer outright defeat.

The reversal of expectations about the robed folks in the present is fun. With all that exposition, it seems like an extra line explaining why Ophelia knows how long to keep a rift open might have been a good idea (or the line could have been given to Ketch or even Gabriel), but what the heck. It’s a little weird that nobody thinks how Sam and Dean’s mom Mary will react to seeing Ketch come to her rescue, since he tried to kill her relatively recently. Maybe this will be a plot point. In any case, it’s certainly good to see Speight again – he’s been a director on seven SUPERNATURAL episodes, but he’s a fun presence in front of the camera as well.