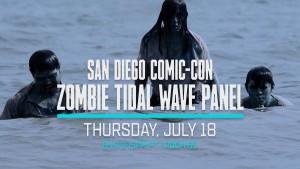 There may not be a new SHARKNADO this year, but producer/star Ian Ziering has teamed up with his frequent SHARKNADO collaborator Anthony C. Ferrante (who directed all of the films in that franchise) for this summer’s ZOMBIE TIDAL WAVE airing August 17 at 9:00pm EST/PT on Syfy.

And now the duo, along with ZTW producer Darby Parker and co-stars Shelton Jolivette, Angie Teodora Dick, Tatum Chiniquy, and Lincoln Bevers will be previewing the new film at this year’s SAN DIEGO COMIC-CON with an exclusive teaser trailer and clips from the film which pays homage to zombie classics of the ’80s with a modern twist. 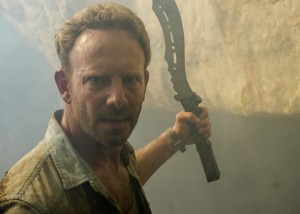 The synopsis of the film finds a mysterious ocean-borne outbreak threatening rogue, veteran sea captain Hunter Shaw’s (Ziering) seaside island community, forcing him to lead a disparate band of locals to uncover the origins of the undead pandemic.