The actor talks about the new Showtime series 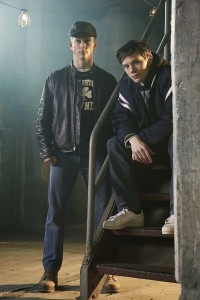 Showtime’s Sunday night drama CITY ON A HILL is set in 1990s Boston. Rule-breaking FBI agent Jackie Rohr (Kevin Bacon) and erstwhile upstanding district attorney DeCourcy Ward (Aldis Hodge) join forces to track down the crime crew of Frankie Ryan, played by Jonathan Tucker. Frankie and his team specialize in robbing armored cars, but during their last job, Frankie’s brother Jimmy (Mark O’Brien) got hot-tempered and shot one of the guards, necessitating (in Frankie’s eyes) killing the other two witnesses. Now Frankie is trying to keep alive, solvent and free, while also tending to his marriage and three young kids.

At the time of this interview, Tucker had only seen the pilot of CITY ON A HILL.

JONATHAN TUCKER: It’s really good. What is to be determined is, can we pull off the next nine episodes? And it looks like we can, but I don’t know. I can only control the things in my purview. So I’m not going to give my word that this is the best new show on television; I’ve only seen one episode. But I care a lot about the world, and I care a lot about the character. I guarantee you there will be a project or a character or a role where you’re going to go, “Eh, I don’t quite know what he was going for there.” [But] I don’t think this will be the character where you’re going to say, “This doesn’t quite work.”

I read this interview with Paul Schraeder, where he talks about this transcendental method of work, particularly acting, but also writing, which is how far back you lean to get the audience in. And of course the risk is, you fall so far back that the audience is done, they get up and leave. But the hope, and maybe the bait, is that you can lean so far in that you’ve created the most [involving] performance of your career. And I’m really looking to work on that with this character in this production. I feel like the luckiest person in the whole world, to be employed.

ASSIGNMENT X: What can you say about Frankie Ryan and his place in the scheme of things in CITY ON A HILL?

TUCKER: The entire first season is going to be, how do these two disparate characters, DeCourcy Ward and Jackie Rohr, come together in order to take me and my family down? I have committed the cardinal sin of murder, in an armed robbery, which is a Federal crime, and in point of fact, all three of us [Frankie, DeCourcy, Jackie] share so many of the same qualities. We’re all going home terribly lonely, and we’re all going home with an extraordinary burden on our shoulders. DeCourcy and Frankie Ryan, my character, have more of the responsibility that we feel than Jackie does, but I think Jackie winds up feeling a lot more responsibility in the first season as it goes on. The first season is a cat and mouse game, and it has these three storylines coming together.

TUCKER: No, totally different. It’s a blood family. Frankie makes these justifications, but part of your heart knows, the further I go to protect my family by supporting us in this criminal enterprise, the further the island moves out from the mainland. Because the great irony here is, I say, “I’m protecting my family, I’m saving my family, I’m supporting my family,” but really, I’m jeopardizing them. Because at any point in time, I can get picked up and go to jail for the rest of my life, or I could get killed. Or both. And that’s really some of the duality that we have here in the show. So that duality is, I think, where we’re seeing the complexities of this character, but we also see a lot of similarities with the other two.

AX: How far up the ladder is Frankie in his organization? Is he at the top, or is he answerable to other organizations?

TUCKER: No. This isn’t the Sicilian Mafia, and it isn’t the Irish Mafia. It’s working-class guys doing a working-class job that just happens to be robbing armored cars. And they’re not looking to kill anybody, and they’re not supposed to kill anybody, and this one operation went totally haywire, and in that sideways operation, his whole world wound up being turned upside-down. 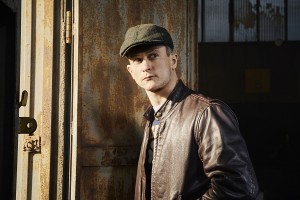 AX: CITY ON A HILL seems a little like the movie THE TOWN, which is also a drama about robbers in Boston …

TUCKER: Yeah. It’s totally unfair to not draw parallels. Same people, same neighborhood. The movie THE TOWN is named after Charlestown, and my family, personally, I was born and raised in Charlestown, at 21 Monument Square, 02129, and these characters in our show are from Charlestown. So there are certainly parallels, but in a ten-hour episodic run, you get to tell – I’m not in the writers’ room, but I hope we’ll be able to tell a more nuanced, detailed, richer story than you’re going to see in a movie theatre.

AX: Do you feel CITY ON A HILL has a good feel for Boston?

TUCKER: The writer who created the show is Chuck MacLean. And Chuck writes Boston better than anybody that I know of, other than J. Anthony Lucas, who wrote COMMON GROUND, which is one of my favorite books. It won the Pulitzer. It follows three families in the city of Boston. It’s nonfiction – a black family in Roxbury, Dorchester, a white Irish-Catholic family in Charlestown, and a blue blood Brahmin up and coming couple in the Back Bay. It’s a story about the ‘70s and ‘80s in Boston, really the ‘70s, but it gives kind of a platform to where we are in the ‘80s and ‘90s in Boston. And after he wrote the book and won the Pulitzer, J. Anthony Lucas committed suicide. Totally tragic story. It’s an amazing book. It’s a life-changing book, particularly if you know Boston. Parts of it read like Faulkner. Chuck MacLean writes like that. And he wrote that pilot, and it felt a lot like F. Anthony Lucas was coming back to write the pilot.

AX: Did you have to do any research for any aspect of Frankie?

TUCKER: Yeah, of course. I could draw you a map of Charlestown, I can walk you through it with my eyes closed, every back alley, every corner, and bodega. That’s my whole life. I grew up there until I went to high school. It’s such a big part of my life, and who I am, and how I see the world, and how I was in many ways informed in terms of my character, and my perspective, things of that nature. But the investigation really is into the things you didn’t want to see in your own backyard or neighborhood, the things you chose to ignore, and the things you chose to defend or cover up that maybe you shouldn’t have. And then the meaningful stuff about trying to create and build a character. If I asked you, you specifically, what I would have to know about you to play you, I feel like that’s a lot. Think about all of the things, the smell of maybe your mom’s hands, or your father’s hands when he gave you hell when you were a young kid, or going to sports games, or what smells are like in your grandparents’ house, the first time somebody broke your heart, the first time you thought you had a crush, getting into college. There’s a lot of sh**, a lot, right? So the investigation is less into what street I lived on in Charlestown, or what Boston was like in the ‘90s, and more like, who is this person? And that’s the more interesting answer to, how do you create a humanity to somebody who’s robbing banks? It’s like, did my mom teach me how to brush my teeth? How did she do that? Did I have to stand on a little stepping stool in the bathroom? Did I look into the mirror, and was the shower too hot? Was there too much steam? We’re all real human beings.

AX: Did you have to learn anything about how to hold the specific types of guns that Frankie uses?

TUCKER: Well, I can’t control when I’m employed, I can only control how hard I work. I do weapons training whenever I’m back here, with a guy named Taran Butler. He’s got a weapons training facility up in Simi Valley, and I’m up there a few times a month if I’m in Los Angeles. So I shoot all his guns, I’m really comfortable with them, I know how to drive a manual transmission, left side, right side, I can ride a horse, do different accents, I’ve studied different animals, I can do a little [non-English] language here and there. You have to have those sorts of things, otherwise, you’re playing catch-up when you get the role. You don’t want to play catch-up. You don’t want to get the role and have a few days with the weapons guy. That’s unacceptable to me.

AX: You try to be proactively prepared …

TUCKER: You try to work. I’ve met Martin McDonagh twice for movies. Haven’t gotten them, haven’t even gotten close. But I’ve read everything he’s written. All of his plays. I’ve done his plays in class. You can’t get the audition and be like, “Oh, I’ve [now] got to read all of Martin McDonagh, and get deep into a certain character.” You have to do the work. There’s so much more work for me to do, even right now. But if you get up every day and try to do something as an actor, even if that means sitting in a coffee shop, just looking around, even just doing that, you’re in flow, you’re in the moment, you’re present, and that’s where you’re not playing catch-up.

AX: To ask a non-CITY ON A HILL question, you spent three years on KINGDOM. Were you happy with the way that KINGDOM wrapped up?

TUCKER: I’ve never had to say goodbye to a character that I had been with for so long, and it’s very hard. It’s even hard now [laughs]. Because it’s like a death. It really feels like that. And what you realize is, when you deal with a death, it’s just time. You can go do all the sage burning you want. And there are great things. You can sit shiva, and it’s very helpful. You can go have a wake, and that’s helpful. But ultimately, it’s just a time thing. You just have to let time go by. But it’s still always going to be in your heart. So it’s hard to live with these characters for an extended period of time and say goodbye.

AX: And what would you most like people to know about CITY ON A HILL?

TUCKER: I don’t know yet, because I don’t feel comfortable saying anything until we finish the season. It would be unfair of me. My hope is that we do such justice to this city at this time, with these three different storylines, that nobody ever wants to do another show about Boston again. That’s what I hope. Think of THE WIRE, with Baltimore. No one wants to go to Baltimore. Are you kidding me? You want to go up against THE WIRE right now? You’ll get every comparison under the sun. That’s what I hope we do with this show. So we’ll see.

Related:  Exclusive Interview with CITY ON A HILL star Aldis Hodge on Season 1 of the Showtime series and also talks about LEVERAGE fans