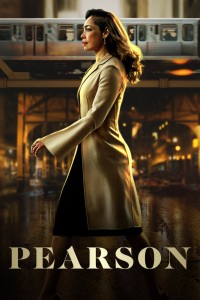 SUITS fans need not despair. Yes, the series is in its last season, but its spinoff, PEARSON, premieres on USA Network Wednesday July 17. Daniel Arkin and Aaron Korsh (the former is a writer/executive producer on SUITS, the latter is that series’ creator) teamed up to develop a series around Gina Torres’s character Jessica Pearson. Pearson started out as the head of the New York law firm in SUITS, but left at the end of 2016-2017’s Season 6. PEARSON finds her working for the Mayor’s office in Chicago, where she faces issues with both work and family. In addition to starring in the series, Torres serves as one of its executive producers.

PEARSON isn’t the first time Torres has said goodbye to a character, only to resume playing her in a different context. When Torres played Zoe Washburne in the short-lived 2002-2003 TV series FIREFLY, she wound up reprising the role in the 2005 feature film SERENITY. The actor, originally from New York, is also known for her work in THE MATRIX franchise and the TV series CLEOPATRA 2525, ANY DAY NOW, ANGEL, 24, ALIAS, STANDOFF, HUGE, HANNIBAL, THE CATCH and WESTWORLD, as well as doing award-winning voice roles for a variety of animated projects.

ASSIGNMENT X: How was the experience of saying goodbye to the character of Jessica Pearson, and then finding yourself saying, “Oh, hello again”?

GINA TORRES: I’ve pretty much lived my life saying, “Never say never.” And I didn’t walk away from SUITS saying, “Never,” because clearly, I kept coming back a few times during the course of the last few seasons, but I did not expect [the PEARSON spinoff]. That is certainly not what I expected at all. But like Dan and Aaron said, it is an idea that seemed to evolve very organically, the pieces were in place, and it makes sense. Especially because we knew so little about Jessica in the world of SUITS, there were still so many doors that were unopened into her psyche, into her personal life. So I don’t feel like I’m playing the same character in a lot of ways.

AX: You’ve played a lot of strong characters over the years. Where do you rank Jessica Pearson among them?

TORRES: Oh, my God. [laughs] Gosh. The only thing that keeps her from actually wearing a cape is any actual superhero strengths and otherworldly powers. She’s up there, she’s a pretty extraordinary character to play.

AX: In terms of finding out more about Jessica Pearson than we knew in SUITS, what have you been most surprised to uncover about her in PEARSON?

TORRES: Everything. Really, everything that she ever did on SUITS was in service to the firm, because she didn’t have a family of her own, not that you saw. She didn’t really have an enduring relationship. It was all about the firm. And the one thing that she wanted to do that was important for her when you saw her exit was to get back to what mattered to her, the reason why she got into law in the first place. In doing so, it’s a way to get back to herself. And so we’re asking to come along on this journey as she gets to really figure who she is now, at this point in her life, who she wants to be. Because she already did everything that she thought she was going to. She climbed that mountain. And now she’s on the way down on the other side, is there a valley, or is there another peak? And that’s what we get to see. And what’s the toll that it’s going to take on her personally? 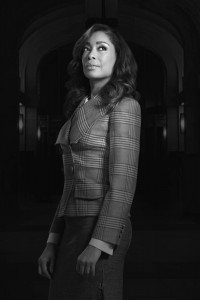 AX: PEARSON deals, among other things, with crime. All cities have crime, but Chicago seems to be more renowned for it than some other places. Do you have a theory as to why this is?

TORRES: I think it really has to do with the disparity in classes, the socio-economic differences, the haves and the have-nots. It’s such a great divide and such an abyss, that just to get along, just to make ends meet, it creates a certain kind of way of living, and creating your own reality. It’s more to do with desperation, and when people are desperate, they do things that they need to do to move forward to survive.

TORRES: Yes, we’re shooting in Los Angeles. And we do go back to Chicago, and do some great location stuff, which will be evident in the scenes.

AX: Jessica Pearson is now enmeshed in city politics. You’ve said you became fascinated with the 2016 election while you were preparing for this series. What did you learn?

TORRES: It’s a much deeper rabbit hole than any of us probably ever thought it was [laughs], certainly than I thought that it was. And that’s what I found fascinating, and disturbing, and dangerous, and hopeful as well. I often say we’re in the situation that we’re in now because we have the free will and the ability to make that happen, and the converse is true, the opposite is true. And this is very much a story about that. We plan to illustrate that, to put that forward, to show this reality where anything is possible, as long as you have the will and the impetus to do that.

AX: How do you feel about the results of the elections for the House in 2018?

TORRES: I think it’s fantastic. A lot of women, a lot of women of color. Every day, somebody new announces their candidacy. The next two years are going to be fascinating to watch. Again, the people have spoken. It is so essential that we take our power back, that we don’t just get to sit down and go, “Oh, that happened,” and not feel a sense of responsibility and accountability for it.

AX: Given what happened in 2016 and since then with politics, with the stories in PEARSON, are you going, “Well, somebody actually did that, but it would look ridiculous if we tried to do it on the show,” or …?

TORRES: [laughs] There’s kind of no ceiling on what we can do, right? There was a moment in time where SCANDAL was just like, “How many sharks are they going to jump?” And here we are, going, “You know what? SCANDAL looks kind of tame compared to what’s going on right now.” 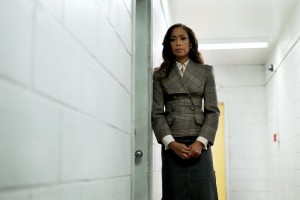 AX: You’re an executive producer on PEARSON. How much input do you have into your character?

TORRES: What’s so great about the group that has been assembled is that we are an incredibly collaborative group of people. I pitched Dan my story. He pitched me his story. Now we have this incredible show. Aaron was involved very much at the beginning. We have a beautifully talented writers’ room. I read the scripts, I give my notes. I say, “We can go further, or is there a trajectory for this particular character that I’m not aware of? What do you want to do in [Episode] 10 that I don’t know about in 3?” Stuff like that. We’re all in the mix, and it’s exciting. I think we’ve come up with an incredible show.