An eventful return by almost everybody to Alt-U 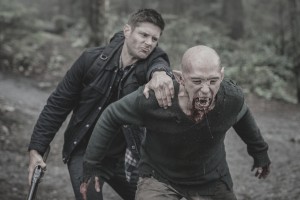 At the bunker, everyone – Sam (Jared Padalecki), Dean (Jensen Ackles), Castiel (Misha Collins), Mary (Samantha Smith), and Jack (Alexander Calvert) – is celebrating the rescue of Mary and Jack from the alternate universe. Wait, did we miss an episode?

No, it’s just Sam having a nice dream. Mom and Jack are still trapped. When it turns out that archangel Gabriel (Richard Speight Jr.) doesn’t have enough grace to power a spell by Rowena (Ruth Cornell) to open a rift between the two worlds, chances of that rescue look dim. Then Sam gets an idea.

Yes, Lucifer (Mark Pellegrino) is still loose in the world, and he has archangel grace. While it’s true that every single time our guys tangle with him, things get messed up, he’s the only option.

By the by, while Sam is getting his idea, Gabriel and Rowena are gettinh busy with each other in the library. Everyone else walks in during this. As the prophets would say, alrighty, then.

Lucifer, despondent, is trying to drink away his sorrows in a bar. Turns out that Gabriel, using his shapeshifter abilities, is the bartender. He gives Lucifer a magical roofie. Lucifer wakes up in the bunker, subdued by Rowena’s spell. Not only can his grace be used to open a rift, Lucifer has so much grace that it can be used to maintain that opening, thereby giving our heroes more time to search the alternate universe. Sam promises that they’ll kill Lucifer when they get back. Lucifer seems indifferent to this. Then Sam, Dean, Cas, and Gabriel head through the rift.

Rowena is left to babysit Lucifer, watching as his grace keeps leaking into the spell to keep the rift open. Alas, Lucifer knows how to push Rowena’s buttons, and she finally snaps, just as he gets free of his magical bonds. Before he can kill Rowena, she knocks Lucifer off her with a spell. Good news: Rowena lives. Bad news: she knocks him right into the rift, and he disappears into the alternate universe. Oops.

Rowena knows she’s the only one who may be able to keep the rift open so the boys can return, but she tells herself it’s not her problem. Then she has an attack of conscience. Wait, Rowena has a conscience? And it has an effect on her? Maybe this is the alternate universe. No, it’s character progression. Um, okay.

Unaware of all this, Castiel is able to locate Mary and Jack’s location in a rebel camp, about two days’ walk from where he, Sam, Dean, and Gabriel have emerged from the rift. Castiel talks to Gabriel about the situation in Heaven. Heaven is low on angels. Maybe Gabriel could go up there and run the place?

Our heroes come upon a vampire attacking a human man, Floyd (Michael Patric), and a young girl, Maggie (Katherine Taylor). Sam kills the monster. The humans explain they were trying to join Mary and Jack’s group, but the shortest route is through a cave that is inhabited by a nest of vamps. No problem for our monster hunters, or so they think. Inside the cave, the group is attacked. The vamps take out Floyd – and Sam gets bitten in the throat and dragged away. Cass tells Dean they don’t have time to go after him, and that Sam is lost. 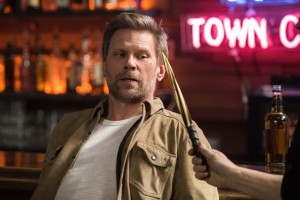 It is easier to buy Rowena’s shift in priorities than this declaration. There is nothing more important to Dean than Sam, not even Mom. It seems like all other issues would go by the wayside for Dean, and that Cass should know this. It also seems like the people making SUPERNATURAL should know this, but amazingly, Dean goes along with it.

The group makes it to Mary and Jack’s camp. Mary greets Dean joyfully, then realizes from Dean’s tears that something is terribly wrong.

Only it’s not, because despite that giant bloody wound in his neck, Sam is still alive. Make that Sam is alive again, because Lucifer has brought him back. Lucifer says he wants what Sam already has: a relationship with Lucifer’s son Jack. Lucifer, thinking logically, realizes that he stands a much better chance of achieving this if he’s done something that Jack will approve of, like resurrecting Sam. All Lucifer wants is for Sam to acknowledge this. (There is also an explanation of how the nearly-drained Lucifer got enough juice to accomplish the resurrection – he ran into a bunch of evil alternate-u Michael’s angels and drained them.) Sam isn’t thrilled with this deal, but the alternative is being re-killed by the vamps.

“Beat the Devil” is mostly a good episode, eventful, with new monsters (the starving alt-u vamps are a design we haven’t seen before) and high stakes. The main complaints are that it seems like Rowena should have had an extra beat on her road to redemption, and Dean should definitely have had a lot more “Let’s go after Sam” energy.

THE MASTER Highlights this week in Blu-ray and DVD Releases
Movie Review: ALL THE BOYS LOVE MANDY LANE
THE BEST SCORES OF 2016 - Part Two - The Runners Up and Composers to W...
Movie Review: CAPTAIN MARVEL