The long way round to get a new/old ally 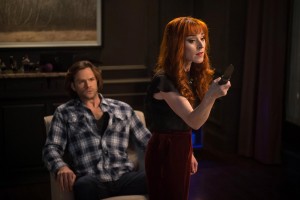 Unable to find Gabriel to get his help or his grace, Sam (Jared Padalecki) and Dean (Jensen Ackles) try their unreliable witch ally Rowena (Ruth Connell). Rowena has gotten superpowers, which makes the guys understandably nervous, since she is not normally “good.” Rowena is sweet to them on the phone, but she’s busy in Oregon, carrying out her own agenda in Portland, which seems to involve incinerating people. She’s also got a near-silent new friend, Bernard (Jason William Day), who follows her around.

Sam and Dean are informed of this by the Reaper Jessica (Kayla Stanton), who has been watching over them ever since she failed to Reap Dean. Sam and Dean have vowed to take out Rowena should she “break bad,” so they head to Oregon. When Sam does research, he finds that Rowena’s victims are connected to a pharmaceutical company that sold mislabeled products, which led to customer deaths. Visiting one death scene, Sam and Dean find that Rowena has also been killing her victims’ Reapers.

Asked for help, Jessica explains that Rowena is causing people to die before their time. This, and the killing of Reapers, is messing with Fate. If Fate is tampered with too much, it will cause a mass human die-off. Rowena’s fate seems unchanging, though, Jessica says. Whatever Rowena’s choices, she is always killed by Sam Winchester.

Sam and Dean get a sit-down meeting at a bar with Rowena. Rowena tells the boys that she’s chosen her victims because they’re pretty awful people, profiting from lying to sick people. (Hard to argue with that one.) She’s killing Reapers because she’s trying to get Death’s attention. This is in order to get back her son, the late Crowley. Rowena, sounding sincere, says she regrets all the things she did to him, that caused him to be in harm’s way.

When Dean says Crowley isn’t coming back from being dead, Rowena points out that Dean and Sam (but especially Dean) have done exactly that, many times. Dean reveals that Sam will be the one to kill Rowena, though Sam says it won’t be tonight. When he tries to reason with Rowena, she flees. Sam chases Rowena out to an alley, while Dean does battle with her bodyguard Bernard. Bernard, it turns out, is only enchanted by Rowena in the romantic way, not the magical one. He thinks she’s awesome, and she pays him really well. Dean finally manages to knock him out. 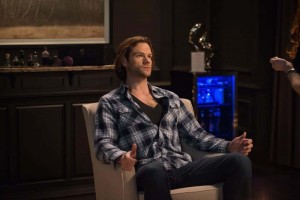 Sam tries to reason with Rowena, but she says she can’t stop. Sam fires a witch-killing bullet at her, but Rowena is able to stop it with her new powers. She then does something to Sam. When Dean and Jessica reach the alley, the only thing there is Sam’s gun. Dean is understandably worried.

Rowena has zapped Sam back to her place. She tells him that she doesn’t want to kill him, but if he’s the only one who can kill her, then surely killing him will get Death’s attention. Actually, Rowena doesn’t have to kill Sam – Death, formerly Billie the Reaper (Lisa Berry), arrives. Rowena tries zapping Death. That doesn’t work. Death says that Rowena was never going to kill Sam – once upon a time, she would have, but Rowena isn’t that person anymore. This seems to be mainly for the audience’s benefit, as we have a tough time knowing what Rowena would or wouldn’t do. Death refuses to take Rowena before her time. Dean and Jessica arrive to find Sam mostly okay and Rowena sobbing on the floor. Death/Billie tells Dean she’ll see him again soon.

Meanwhile, Castiel (Misha Collins) goes to Heaven to seek aid from the angels, even though most of them want to kill him. Castiel is hoping he can persuade them to look for Gabriel, or Jack, or Lucifer (he doesn’t know the angels are all too aware of where Lucifer is – on the Heavenly throne). Castiel is surprised not to be attacked when he arrives in Heaven, which seems to be suffering frequent power outages. The angel Duma (Erica Cerra) says maybe they can help each other. The angel Naomi (Amanda Tapping) shows up. Castiel isn’t happy to see her, since she messed with his memory, drained his grace, and he (and we) thought he’d killed her years ago.

Naomi explains that there are only nine angels left in Heaven, and a few more on Earth. Since Heaven is powered by angels, none of them can leave to help Castiel with his quest. If Heaven runs out of power, all the souls there, billions upon billions, will return to Earth as ghosts. That would be catastrophic. If Castiel can bring the archangel Gabriel back, that would solve Heaven’s problems, and the angels would be happy to reciprocate by helping Castiel with anything else. The problem is, neither Castiel nor the angels (nor Sam and Dean) know where Gabriel is in the universe.

Sam and Dean are both impressed that Rowena didn’t kill Sam. They warn her that Lucifer is back. Rowena says she’s scared, but Lucifer isn’t the one who’s going to kill her, is he? Sam says that Rowena has changed people’s fates; maybe they can change hers. Maybe she can redeem herself. So, will Rowena help Sam and Dean save their family, and the world?

This essentially puts us back where we were at the beginning of the episode. To be more precise, it puts Dean and Sam back where they were. Rowena has gotten Death’s attention, even though she didn’t get the result she wanted, so she’s stopped her killing spree. Castiel has learned more about the situation in Heaven. But the boys are back to wanting Rowena’s help, and she’s back to maybe giving it.

It’s nice that Rowena has a devoted admirer. It would be even nicer if we could be sure of Rowena’s intentions from what we are shown, rather than having Billie/Death tell us in dialogue. Still, “Funeralia” has a lot of good twists and turns. It’s fun if not exceptional.