The inclusion of an evidently solid female character 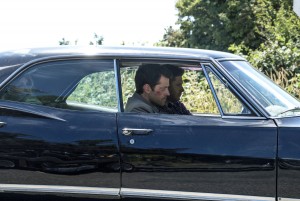 Before we get into the details of the SUPERNATURAL Season 12 premiere, “Keep Calm and Carry On,” let us note that this is indeed Season 12 and that the show has been picked up for Season 13. Hats off, folks, that’s quite an achievement.

In (slightly) smaller news, Misha Collins, who plays the angel Castiel, has received an “and” credit this year. This means he comes after Mark A. Sheppard (the demon Crowley) in the opening titles, but gets special billing. Congratulations, Mr. Collins, that’s an achievement, too.

And now on to our story. As a parting gift to Dean (Jensen Ackles), the Darkness, aka Amara, has thanked him for reuniting him with her brother (God) by resurrecting Dean and Sam’s (Jared Padalecki) mother, Mary Winchester (Samantha Smith). After Dean proves to Mary that he is indeed her son, she’s overwhelmed.

Mary is still the age she is when she was killed by a demon when Dean was four and Sam was a baby. She has no memory of meeting Dean and Sam when they time-traveled into the past, nor of being a ghost. She does remember her life, being a Hunter, her husband John – and the family car, which she’s happy to see again.

Sam, still thinking Dean is dead, is shot in the leg and kidnapped by Lady Toni Bevell and her associate Ms. Watt (Bronagh Waugh) from the London branch of the Men of Letters. After taking Sam to a veterinarian to get his wound cleaned, Toni and Watt begin interrogating Sam. The British Men of Letters have been incredibly successful in keeping monsters out of England. Since the Winchesters tend to leave casualties right and left, Toni and her colleagues want to take over monster-hunting in the U.S.

Toni wants Sam to tell her where Dean is. Sam still thinks Dean is dead. Toni then wants to know how Sam saved the sun (long story, involves God, Sam isn’t going to repeat it). Toni also wants the names and locations of other Hunters. When Sam won’t talk, Tony has Watt torture him. Sam points out that he’s literally been tortured by the Devil, but it takes a lot out of him.

Meanwhile, Castiel has been zapped out of town by some magic of Toni’s. He commandeers a truck and gets back to the Men of Letters headquarters in Lebanon, Kansas just after Dean and Mary arrive. Castiel is delighted to see Dean (yes, it’s just as slashy as we’ve come to expect) and pleased to meet Mary. Mary is surprised to meet an actual angel. They then set about tracking Sam. 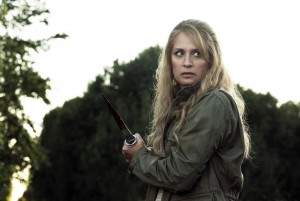 In other news, Crowley sees that Lucifer – having been cast out of Castiel – is now jumping from body to body, leaving them burned out in the process. The demons of Hell figure that Lucifer will be back in command soon. Crowley kills a few of Lucifer’s loyalists and tries to find the big guy himself.

It’s good to see that Sam’s fighting spirit is with him, even when he thinks Dean is dead. There’s also some fun with one of the demons channeling his former teenaged hostess and the other demon reacting with some horror.

While it’s hard to tell from one episode how it will go and how long she’ll last, for now, Mary seems like a good addition to the team. She proves herself very capable (she kills Watt to save Dean and Cass), dimensional (she is stunned after killing a fellow human), and there’s no fear of romantic entanglement (an issue that seems to draw fan protests whenever it arises on this show). Ackles also shows thoughtful depth in scenes where Mary’s presence registers on her grown son.

It’s interesting to contemplate the plot reason why Amara sent Mary rather than John (one real-world reason is that Jeffrey Dean Morgan, who played John, is still busy as Negan terrorizing the cast of THE WALKING DEAD at present). This seems a likely topic for discussion between the characters.

Although it’s hard to imagine how SUPERNATURAL is going to compete with Season 11’s end-of-the-universe stakes, Season 12 is off to a good start. Keep calm and carry on, indeed.