Supernatural Season 11 Don't You Forget About Me Recap

© 2018 The CW Network, LLC/Katie Yu
Jensen Ackles as Dean in SUPERNATURAL - Season 11 - "Don't You Forget About Me"
Reviews

TV Review: SUPERNATURAL – Season 11 – “Don’t You Forget About Me”

A decent sequel of old home week and vampires 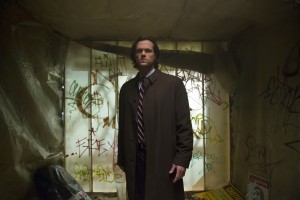 SUPERNATURAL Season 11’s “Don’t You Forget About Me” has slight BREAKFAST CLUB overtones that extend beyond the episode title. Much of the story takes place in and around the Sioux Falls, South Dakota high school where reformed vampire lure Alex (Katherine Ramdeen) is now dating popular boy Henry (Jedidiah Goodacre).

After Sam (Jared Padalecki) and Dean (Jensen Ackles) rescued her from her vampire “family,” Alex, as is known by viewers following SUPERNATURAL’s many subplots, was taken in by Sheriff Jody Mills (Kim Rhodes). In another subplot, Jody also wound up taking in Claire Novak (Kathryn Love Newton), the now-orphaned teen daughter of Jimmy Novak, the man whose body Castiel (and now Lucifer) inhabits.

Claire is supposed to be attending college, but she’d much rather be Hunting. Claire is sure something unnatural is responsible for the disappearances around town, but she keeps attacking regular humans. When she asks Sam and Dean to come to town to help her out, they side with Jody, who thinks Claire is over-reacting.

Claire, apparently the only one of the bunch who has been paying attention over the last few years, turns out to be right. The problem is vampires – specifically, Mr. Wheeler (Ben Cotton) who started out as a nice man who offered Alex a ride and wound up drained and turned by the vampire nest that used to use her as a lure. Worse, once turned, Wheeler drained his wife and son.

Wanting revenge, Wheeler killed Alex’s favorite teacher, turned Henry so that the young man would break Alex’s heart and now threatens Jody and Claire. Alex offers to go with Wheeler if he’ll spare them. Wheeler attacks anyway. Sam and Dean come to the rescue, Wheeler is killed and Alex punches Henry in the nose before Claire decapitates him.

Alex thinks she may eventually have to learn town because her past keeps catching up with her, while Claire is more determined than ever to be a Hunter. However, now the young women at least appreciate one another and foster mom Jody.

“Don’t You Forget About Me” deliberately tips its hat to the John Hughes canon and indeed in some ways resembles a fanged Hallmark movie, but it definitely has its moments. Seeing Sam and Dean trapped at the family dinner table while Jody lectures her foster daughters about the whys and hows of birth control is memorable, and a SCREAM visual shout-out works well. On the other hand, there are times that the episode goes a wee bit too far with our recurring guest characters – there’s just so much time we can spend with teenage girls ragging on each other and bicker with their mother figure, and have that mother figure express her angst at whether or not she’s doing a good job of parenting, before we start wondering on a visceral level just what the hell we’re watching.

Mostly, though, “Don’t You Forget About Me” stays on the right side of the SUPERNATURAL standalone episode line – it’s got blood, it’s got vamps, it’s got jokes and it’s got a plot that connects with the rest of the show but doesn’t require super-knowledge on the part of viewers. Good enough.