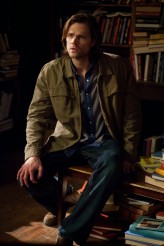 An eventful episode that gives the story arc a big forward push, but feels a little over-expository 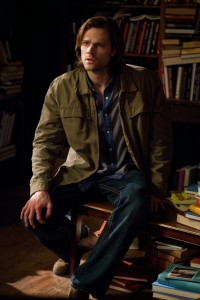 Remember Metatron? No, not the bad guy from TRANSFORMERS – that’s Megatron. Metatron is the angel who was the scribe of God and wrote down the Word on the tablets. After being much mentioned in previous SUPERNATURAL episodes, he finally shows up in “The Great Escapist.” Actor Curtis Armstrong plays the wily celestial being, who got so fed up with angel politics ages ago that he’s been hiding out with a small Colorado Native American community for centuries. Metatron has evidently been giving the tribe members extremely long lives in exchange for stories – the guy has a great love of fiction, oral and written.

Sam (Jared Padalecki) and Dean (Jensen Ackles) find Metatron thanks to a symbol that translates to “Messenger of God” that Sam first saw when he was taking a course back at Stanford. The boys feel they are in dire straits, as it appears that Prophet of the Lord Kevin Tran (Osric Chau) has been killed by King of Hell Crowley (Mark A. Sheppard). In fact,Crowleyis just holding Kevin captive.

Angel Naomi (Amanda Tapping), who we learn is in the Intelligence Division (evidently the angel equivalent of the CIA) finally gets hold of Castiel (Misha Collins). ThenCrowleysteals Castiel from Naomi and pries the Angel Tablet from where Castiel has hidden it within himself.

Metatron agrees to step up and rescue Kevin. It’s unclear if Metatron kills Crowley in this endeavor, but the King of Hell certainly gets a bad burn and Kevin, who has stood up to Crowley quite admirably, is safely reunited with the boys.

Meanwhile, Sam has realized that the trials are changing him by purifying him from the taint of the demon blood he’s had since infancy. The third trial is to cure a demon. As the Winchesters, with Kevin, are driving away from South Dakota, they come upon Cass, who is lying in the middle of the road.

Metatron is a fun character, with nifty powers – when asked how he got pastCrowley’s anti-angel sigils, Metatron points out that, as God’s scribe, he can simply erase them. We do wonder why Sam, Dean and Kevin don’t simply stick with Metatron and have him quickly read his own writing rather than make Kevin do his own translation, but maybe this is covered in all the exposition that whizzes by here.

This is perhaps the problem with “The Great Escapist” – a lot of lore is crammed in here, to the point where the episode feels slightly stop and start, though the dialogue is made as painless and entertaining as possible. There’s an ongoing joke that doesn’t entirely work about how all the outlets in the Biggerson’s restaurant chain are so identical that the angels can’t pinpoint which one Castiel is in at any given time. (They finally trap him by slaughtering all the workers in one outlet, causing Castiel to pause there.) Then there’s the whole matter of Castiel being told that Naomi has messed with the minds of all angels, and Castiel being blamed for participating in the slaughter of the firstborn back in Egyptian days. It seems like Castiel has quite enough that he does remember that he can feel guilty about without Naomi trying to make him feel bad about things she’s caused him to forget.

So, plot elements in play here: there’s a power struggle in Heaven – well, that’s been going on for seasons now. Sam is being purified of his demon blood – which would matter if it had ever seemed to harm him before now. Kevin is rescued – good. Castiel is back with the Winchesters – also good.Crowleymay or may not be dead – it would be a shame to lose Sheppard, who makes a fun snarky villain.

“The Great Escapist” has some fun moments and it moves very quickly, but somehow it feels more expository than strictly enjoyable.