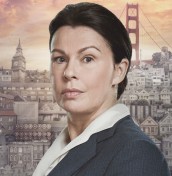 The actress talks playing her old role in new surroundings 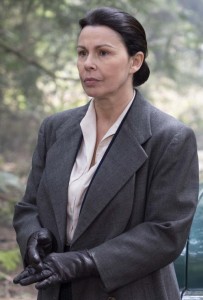 THE BLETCHLEY CIRCLE was originally produced in 2012 and 2014 by Britain’s ITV, airing on PBS in the U.S. The show was named for Bletchley Park, where a team of female code-breakers worked for the Allies in WWII. The series followed four of the women in their post-war lives in England of the 1950s, where the characters come together to use their skills to solve peacetime murders.

THE BLETCHLEY CIRCLE: SAN FRANCISCO is a sequel series that brings two of the original characters, Julie Graham’s Scottish Jean McBrian and Rachael Stirling’s English Millie Harcourt, to the American city. Originally in pursuit of a serial killer who murdered one of their colleagues during the war, Jean and Millie stay to solve more crimes while experiencing continuous culture shock. All eight episodes of THE BLETCHLEY CIRCLE: SAN FRANCISCO are now available on Britbox, which produced the series in conjunction with ITV.

Graham, born in Ayreshire, Scotland, has credits that include being a regular on SHETLAND, BENIDORM, BEING EILEEN, SURVIVORS, BONEKICKERS, and WILLIAM AND MARY.

ASSIGNMENT X: How surprised were you when THE BLETCHLEY CIRCLE came back around after having been off the air for a few years?

JULIE GRAHAM: Well, I was shocked, because you never expect that, when you do a show, and suddenly it comes back – you never expect it to come back. It was – I would say not a shock, more of a nice surprise.

GRAHAM: I did, actually, because we were quite disappointed when it finished, because we thought it could go on. We let it go. But yeah. There’s quite a bit of sadness about the fact that they had no options. There was very, very little that they could really do, because they weren’t valued at all in society. There are two things going on. One is their sex, and the other one is their age. So there were very, very few opportunities. And especially for an unmarried woman who’s in her fifties. There’s almost no status, and very few opportunities that someone like Jean would have. And also, you’ve got to remember that in Britain, there’s also a class thing as well. So it’s not even just the fact that she’s older and not married, she’s also working class. So very, very few. The librarian [which Jean is at the start of THE BLETCHLEY CIRCLE: SAN FRANCISCO] is probably the only job she could get. She leads a very frugal existence. 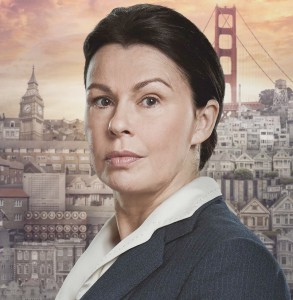 AX: THE BLETCHLEY CIRCLE: SAN FRANCISCO is obviously set in San Francisco, but you actually shot in Vancouver, Canada. Had you worked in Vancouver before?

GRAHAM: No, I’d never been to Canada before.

AX: What were the differences for you between working in Canada and working in the U.K.?

GRAHAM: Things seem to work at a far faster pace, but that’s a good thing. I love that, because you’re not hanging about as much. Because most of acting is, you’re getting paid to hang around, not to actually do the job. So that was wonderful. And it’s unusual, because when you first start a new job, you’re usually working with people who are an unknown quantity. But actually, a lot of the people who worked on the show were actually fans of THE BLETCHLEY CIRCLE, so there was a great enthusiasm, and a great need to get it right and to protect the BLETCHLEY brand, I suppose, so to speak, even though we were taking it in a different direction.

GRAHAM: [laughs] No. I was very enthusiastic about coming to Vancouver and working. It was interesting for me as an actor to put myself in the shoes of a woman who, to a certain extent, had led a quite sheltered life. Although she’d done great things in the war, they’re not the Secret Service, they’re not doing things that are …

AX: She was still doing it in a government building, which is a relatively safe environment.

GRAHAM: Exactly. So to put yourself in that situation, I think, is a very interesting thing, because they come from a completely different generation to us. I mean, I think they’d be horrified with modern society now. They were very dignified, had a lot of self-respect, but this kind of constant analysis of who we are and what we do and this kind of navel-gazing that we all have on social media, and constantly analyzing how we feel, they just didn’t have any of that. I think they’d be horrified. I think they all just got on with it. 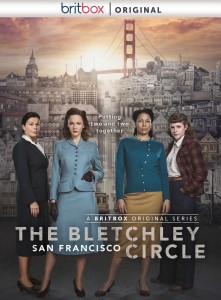 AX: Now, you in reality are a conventionally very beautiful woman …

AX: Whereas Jean is styled and made up to be less so. Do you feel that Jean’s look is a getting into character thing? Do you have any hesitation about that?

GRAHAM: No. Well, I didn’t have any hesitation about it. I was just playing her for who she is. But actually, what was really nice is, your vanity is stripped away. It’s a double-edged sword. Because on one hand, it’s a great experience to just go, “This is who she is.” She would never wear any makeup, her hair’s tied back in a bun, there are no hours and hours of makeup every morning. You just go onto set and I find that very freeing. Because so many times, as an actress especially, you’re kind of judged on your looks, or you’re judged on your appearance, or it’s mentioned, or you’re expected to look a certain way for a certain character. So to play someone who’s completely without vanity, I found that very freeing. I loved it, and I absolutely jumped at the chance to do that. It’s all about the performance, rather than worrying about how you look, and how you’re coming across in terms of your physical appearance. But in terms of getting into the character, it was really, really helpful.

It’s something that a lot of actresses don’t experience in their career, because they are expected to look a certain way, and they are expected to be attractive, or to present themselves, or it’s all about their clothing. With Jean, this is what she would wear. With the austerity in Britain, she would have one coat, she would probably have two suits. One would be her normal, day-to-day suit, and the other one would be “kept for best,” for funerals and weddings. She didn’t have a lot of money. One pair of shoes, probably, and a handbag, which she’s probably had for years and years and years, and that’s the way she dressed. It was functional, and it would be the last thing she would think about, when she got up in the morning, was how she was looking or dressing.

AX: And was there anything about ‘50s San Francisco that you learned in the course of doing the eight episodes of THE BLETCHLEY CIRCLE: SAN FRANCISCO that surprised you or was particularly interesting?

GRAHAM: Yeah. The thing that really surprised me was, the first couple of episodes are set in the Fillmore area of San Francisco, and what I didn’t realize was that originally, it was an area where Japanese people had settled, Japanese immigrants, and after Pearl Harbor [they were imprisoned in government internment camps]. I felt very, very ignorant about that. I knew about internment, but I assumed that it would be people who [the government] thought were involved in the war, not just emptying areas and people who had businesses and lives there, and put them into camps. I found that really shocking. I was not aware. And then when the African-American community were moved in there, there was a huge tension created between the African-American community and the Japanese community, because obviously, they were literally moved into people’s homes. And I was so unaware of that. So that was a fascinating thing for me, just because San Francisco has such a reputation of being very open and free and real hippie culture, and it was flower power and everything, and it was interesting to find out culturally what led up to that.

AX: Is there a difference in working with a cast that’s as female-led as THE BLETCHLEY CIRCLE: SAN FRANCISCO than a more conventional production with mostly male leads?

GRAHAM: There’s less bulls*** [laughs]. The female-led shows that I’ve worked on, and I can’t speak generally, but in my experience, it’s easier, it’s more inclusive, it’s more about the work, it’s less about the ego. There’s this myth that women don’t work well together. I think that’s absolute bulls***. It’s very nurturing, and fun, and irreverent, and dirty, and sexy, and it just feels more collaborative, I think. I’ve worked with amazing male actors and I’ve collaborated with amazing male actors, but I think there’s just something about a female-led show that, for me, obviously, as a woman, I love it. I flourish. And I think a lot of women do flourish, because I think some women don’t flourish in very male environments. So I think everyone is able, allowed to do their best work.

AX: THE BLETCHLEY CIRCLE: SAN FRANCISCO was the first original series made for Britbox. They’ve since done more original series, but did that fact in any way affect what you were doing, or was that just like, “That’s nice”?

GRAHAM: Yeah. I loved it. I think all these new streaming companies are just the changing face of television. I think it’s quite exciting. You feel like you’re at the vanguard of something. I think Netflix and ours [Britbox] and all these people kind of changed the face of television, and the way that television is made, and it’s opened up a whole new world, and that’s a good thing. I mean, cream rises to the top. There’s a worry sometimes, I think, that the more content there is, the more it’s dumbed down. But I think in terms of streaming services, and what they’re doing, and what they’re making is actually a good thing in terms of quality and diversity and more female-led drama. I think it’s a really positive thing. So I always jump at the chance to do new things like that.

AX: Would you want to do another season of THE BLETCHLEY CIRCLE?

AX: And what would you most like people to know about THE BLETCHLEY CIRCLE: SAN FRANCISCO?

This interview was conducted during Britbox’s portion of the Television Critics Association (TCA) press tour.