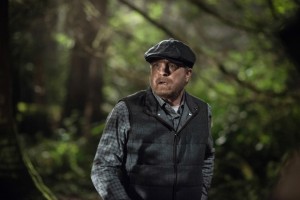 Sam (Jared Padalecki) is running himself ragged, teaching classes for alternate-universe-refugees-turned-Hunters in the bunker, monitoring Hunter check-ins and watching their body-cam footage. Dean (Jensen Ackles) is worried that Sam isn’t getting enough sleep.

When alt-universe refugee-turned-Hunter Maggie (Katherine Evans) disappears investigating a ghoul in Oklahoma, Sam and Dean try to find out what happened. Maggie’s body-cam footage shows she was attacked in a crypt inside a private cemetery belonging to the Rawling family by what looks like an old man (Darcy Hula).

Neil takes everybody to see Rawling, who is unconscious, hooked up to a lot of medical apparatus, including blood transfusion bags. Dean and Sam recognize him as the same old man who attacked Maggie in the body-cam footage, but he doesn’t look capable of attacking anybody. We see (but they don’t) that Maggie is being held in a dark room, yelling for help, and apparently having blood drained from her body. Rawling’s adult daughter Sasha (Leah Cairns) seems stressed out at dealing with her father’s impending demise, and says she can’t deal with the Historic Preservation Society.

Outside, Bobby scolds Sam for sending Maggie on a solo mission, saying that “a real leader” would have known better. Sam goes with Mary and Dean goes with Bobby, searching the property for signs of Maggie. Sam is clearly stung by Bobby’s words, even though Mary tells him that she thinks he was born to do what he’s doing now with the alt-u Hunters. And then the conversation gets into awkward territory, with Mary acknowledging that she’s got feelings for Bobby, and Sam partly giving advice and partly wondering if he really wants to talk with his mom about her post-Dad romantic urges. 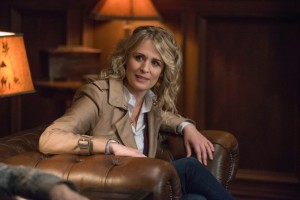 Dean thinks Bobby was being hard on Sam, given that Sam is working more than twenty-four hours a day trying to get their suddenly large team up to speed.

Mary finds a clutch of partially burned fake government IDs at the same time that Dean finds a cabin with a dead body inside. Then Dean is attacked by the same Rawling-lookalike that grabbed Maggie. Dean stabs whatever it is, and it dusts, a la vampires in BUFFY THE VAMPIRE SLAYER. Dean is baffled.

Back at the house, Sasha thinks she hears noises coming from the attic. When she goes to investigate, she’s chased by a vampire – but only a little. The vampire disappears. Sam, Dean and Mary return and explain the state of the world (there are monsters, there are Hunters, etc.) to Sasha and Neil. Sasha is freaked out; Neil is disappointed that they’re not really with the Historical Preservation Society. Mary realizes Bobby should be with them and goes out to the woods to look for him; Sam goes to check on what was making the noises in the attic; Dean stays with Sasha.

Sam finds Maggie, gets attacked by the non-Rawling, stabs it and it too dusts. Sam then works to unchain Maggie. Dean learns from Sasha that there didn’t seem to be anything supernatural, just selfish, about her father. Sasha’s mom committed suicide when Sasha was twelve; Rawling never said he was sorry.

Out in the woods, Bobby – remember, this is alt-u Bobby – is confronted by the specter of his adult son Daniel (Thomas Nicholson), who has burned-out eyes and was crucified in the alt-u. Daniel uses a blade to pin Bobby to a tree, then starts to strangle Mary when she finds them. Bobby unpins himself, then stabs Daniel with the blade. Daniel dusts.

Dean takes a good look at Rawling’s home hospital room, realizes what’s going on and gets Sasha to go outside. Along with nurse Neil, Dean explains that he knows Rawling isn’t getting blood transfusions; he’s being drained. Neil is a djinn. Neil at first thinks Dean is still possessed by archangel Michael and that this is part of a test. When Neil realizes that this is actually Dean Winchester, he doesn’t want to harm Michael’s favorite suit. Neil explains that, yes, Michael made a deal with him – kill as many Hunters as possible in exchange for a power upgrade. Michael, Neil continues, has made this same deal with all sorts of monsters. Neil can now read people’s minds to make their nightmares come true. Neil tries to read Dean’s mind, but what he sees there stuns him and Dean is able to get the upper hand. Dean tries bashing Neil’s head in with a metal bookend, then shoots him repeatedly for good measure.

Free of the djinn’s poison and no longer being drained of blood, Rawling starts to wake up. Dean suggests that maybe Sasha can reconcile with her father. Sasha seems to doubt it, but still holds her dad’s hand.

Back at the bunker, Sam, Dean and Maggie receive heroes’ welcomes. Mary patches up Bobby, who tells her about his real son Daniel. When the angel wars came to their world, Bobby was put in charge of a platoon that included Daniel. The angels took Daniel – Bobby never found the body. He blames himself and thought he’d die in the war. Now he thinks he’ll die Hunting. Mary says he’s not allowed to do that.

Mary and Bobby announce that they are going to take a couple of weeks to just hang out together (in Sheriff Jody’s cabin), though they’re nearby in case of emergency. Bobby apologizes to Sam for chewing him out earlier – Sam is actually doing a good job.

Sam and Dean then call everyone they know – including werewolf buddy Garth (yay!) to warn them about Michael’s plans. Dean worries they won’t be able to take out Michael.

Okay, if the guys didn’t worry, there would be no show, but it does seem like they’ve dealt with worse before. The idea of Mary and Bobby hooking up is interesting, but the show doesn’t seem to know exactly what it wants to do with it, so Sam and Dean’s reactions are muted, as is Bobby’s. This feels like the beginning of the squandering of a good opportunity.

We can only hope that whatever Neil the djinn saw in Dean’s mind will be revealed later, or that too will be a disappointment. For now, it’s just a good question.

“Nightmare Logic” is okay, as far as it goes, but it seems to open a lot of doors, only to close them prematurely.