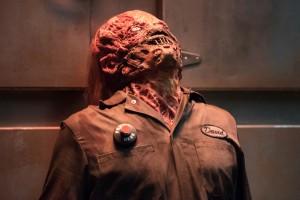 You can generally tell that a SUPERNATURAL episode is going to be more or less standalone when the only two regular characters are Sam (Jared Padalecki) and Dean (Jensen Ackles). Such is the case with the Season 14 Halloween installment, “Mint Condition.” “Mint Condition” begins promisingly in a horror comics and collectibles shop (think Dark Delicacies with less books and less shelf space), where Stuart the clerk (Kurt Ostlund) is in the process of purloining a Thundercat action figure. He gets it home, starts making a video recording, and, this being SUPERNATURAL, the figure comes to life and attacks Stuart.

At the bunker, Dean is hiding out in his room, eating pizza and watching a horror marathon on the Shocker channel. Sam enters. The brothers have clearly not seen each other in at least a day or two, as Dean comments on Sam’s new beardlessness (too bad, we liked the beard). Sam can’t believe Dean is watching an ‘80s scary movie marathon: “Our whole life is scary movies.” Thank you, meta observation. Dean still doesn’t understand Sam’s lifelong, mysterious hatred of Halloween. Castiel is off with Jack doing some educational Hunting, and the bunker is full of strangers, albeit friendly ones, from the alternate universe. But hey, the Winchesters have a case – killer toy in Ohio.

Dean theorizes this may be a bunch of cursed toys a la PUPPET MASTER. When they enter the store, Dean teases Sam and says that he’s the twin of the pretty female clerk, Samantha (Genevieve Buechner), who does in fact have long dark hair and is wearing a checked flannel shirt. Sam teases Dean back and says, in that case, Dean is the twin of the nerdy male clerk, Dirk (Aaron Paul Stuart). Dean scoffs – then promptly geeks out over the life-sized Hatchet Man mannequin from the (fictional) ‘80s slasher franchise ALL SAINTS DAY on display. Stuart doesn’t work here anymore and his roommate threw him out, so Sam and Dean go to question him at his mother’s house. 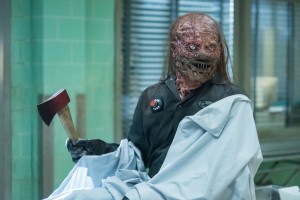 Stuart is in the process of yelling at someone on Fortnite when our guys arrive, posing as insurance agents. Despite visible cuts and bruises, and quite a hospital report on other injuries, Stuart now says he faked the online video and nothing really happened. He also mentions that he was briefly involved with a goth Wiccan, though they never met in real life. When the boys try to press him, Stuart blows up and throws them out.

In the car, Dean and Sam wonder if it’s worth looking into the Wiccan ex. Before they can even turn on the engine, a bloodied Stuart emerges onto his front porch, screaming for help.

While Sam tries to get more info out of Stuart at the hospital, Dean goes back to the house, looks at a poster for THE TEXAS CHAINSAW MASSACRE – and is attacked by a revving chainsaw with no visible means of support.

Conferring back at the hospital, with ectoplasm readings off the charts, Sam and Dean conclude they’re dealing with an angry ghost. Dean remains at the hospital with clerk Dirk, who’s come to visit Stuart, while Sam goes back to the collectibles shop to talk with Samantha.

Samantha explains that the shop was previously owned by Logan, who was a mentor to her and to Dirk. Logan had twice fired Stuart for stealing memorabilia. Logan left the shop to Samantha when he died. She felt sorry for Stuart and rehired him, but had to fire him again. Sam’s EMF detector goes ballistic and he tries to get Samantha to leave. Then the Hatchet Man mannequin comes to life, attacks both of them (though not fatally) and exits, locking them in. Sam can’t even pick the lock. Logan took store security very seriously – his ghost might just be angry enough at Stuart’s larceny to take revenge.

At the hospital, the ALL SAINTS DAY marathon continues on TV. Dean and Dirk bond over their favorite installments in the series. Dean confides to Dirk that he likes watching movies where he knows the bad guy will be defeated. Then Sam calls Dean and tells him the possessed Hatchet Man mannequin is on its way to the hospital. Dean is overjoyed at the chance to square off against his favorite movie monster.

Sam finally blows a hole in the shop wall so that he and Samantha can escape, and he can come to Dean’s aid. Dirk heroically lures Hatchet Mannequin away from Stuart’s room, but ends up running back full circle, where Dean is now ready to smite the monster. As is often the case, the monster is a little more potent than Dean expected. Fortunately, between Samantha and Dirk’s knowledge of Logan, and Sam and Dean’s knowledge of ghosts, they are able to deduce that Logan’s spirit has attached itself to the keychain for the shop. Sam and Dean burn the keychain and the Hatchet Mannequin falls to the floor, no longer possessed. Samantha, Dirk, and Stuart are all properly impressed that ghosts are real.

In the car on the way home, Dean says he’ll never get over having had the evil archangel Michael in his body, but he’s ready to come out of his room and get back to work. In fact, he gets right to work when it comes to getting Sam to ‘fess up to why he detests Halloween so much. Sam solemnly tells Dean the story of Halloween the year that Sam was ten. Sam had an extreme crush on a female classmate – and got so nervous that he wound up vomiting on her. Hearing this, Dean deduces that Sam, having said his secret out loud, must be cured of his Halloween phobia. Next year, they will celebrate properly, by dressing as Batman and Robin, or Ren and Stimpy, or Thelma and Louise … Can we wait?

“Mint Condition” is a loving ode to ‘80s slasher flicks. We see plentiful clips of the ALL SAINTS DAY features, including a trailer, and the fannish dialogue between Dean and Dirk is spot-on.