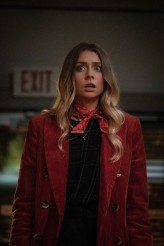 A frisky episode with a welcome returning guest 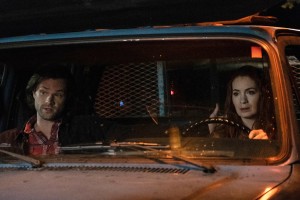 The SUPERNATURAL episode “Optimism” breaks up the formula a bit by having Sam (Jared Padalecki) and Dean (Jensen Ackles) teamed up with different partners. Sam is on a case with alt-universe Charlie (Felicia Day), while Jack (Alexander Calvert) convinces Dean to go Hunting with him.

Jack in fact makes a persuasive pitch to Dean, who is feeling guilty about letting the evil archangel Michael into his body. Jack feels guilty about not taking out Michael when back when he still had Nephilim superpowers. He points out that they’re both in the same Michael-fueled funk. Jack felt better when he was Hunting with Castiel (who is off doing something else for the entirety of this episode); perhaps Dean will feel better if he goes Hunting with Jack.

Jack and Dean take the case of four people who have been killed while courting pretty young librarian Harper Sayles (Maddie Phillips). Dean and Jack devise a strategy to get Harper to talk to Jack. This consists of Dean blowing in hard as an FBI agent, and Jack telling him to back off. Jack gets fully into character, calling Dean “old man.” It’s a moment. Harper is impressed. Then she and Jack seem genuinely attracted to each other. Harper’s coworker is exhibiting stalker tendencies, so it could be that the whole case is just good old human jealousy, but we’ll see.

Meanwhile, Sam and Charlie sit in a car in Tennessee, waiting for something to happen. This Charlie got to live with the love of her life, Kara, until the angel war happened. Then civilization fell apart, there were angry mobs, and Kara was killed in the tumult.

Sam is having trouble remembering that this Charlie isn’t our-world Charlie – he keeps saying “you” when he means “her,” and alt-u Charlie keeps correcting him. She says she hates Hunting and this is going to be her last case, even though she doesn’t know what she’ll do next. She plans to go off by herself.

Charlie’s research, and some mysterious goo at the scene, suggests that she and Sam are tracking a Musca, a half-human, half-fly creature that normally sticks to its own kind. However, when a male can’t find a mate, it sometimes leaves its hive and starts making a nest out of human bodies. “A fly with self-esteem issues,” is how Sam puts it. This seems borne out when, in a superb sight gag, a black-clad figure wearing gloves and a black beekeeper bonnet and veil sits down at a bus stop in front of Sam and Charlie.

A bus obscures Sam and Charlie’s view of the figure and the ordinary guy sitting on the bench next to him. When the bus pulls away, both are gone. Sam and Charlie give chase. They find the creature’s disgusting nest, the not-quite-dead ordinary guy and the Musca himself, who looks like SUPERNATURAL’s version of Brundlefly. Since they don’t have the lore-dictated brass nail with sugar water, Charlie stabs the Musca in one huge bug eye and Sam shoots him. The not-quite-dead guy survives. Sam persuades Charlie that people aren’t meant to live alone, and she agrees to stick with the team.

We see that even Musca aren’t meant to live alone. A group of the creatures, wearing their beekeeper-like concealing clothing, come to collect the corpse of their dead brother to take him home.

In the other storyline, Harper invites Jack over to her apartment so she can give him a rare book. They are both obviously smitten. Jack does a couple of tests to make sure Harper isn’t a demon. She’s not. Dean hears a scream and finds Harper’s coworker’s body in an alley with his throat torn out. Okay, so not just good old human jealousy.

When Dean gets Jack on the phone, Jack says he’s ninety-nine percent certain that Harper is in love with him. Dean impatiently says this isn’t the case. Jack says, just in case it is, he needs Dean to tell him everything about sex. “Go.” Then something attacks Dean. Harper continues to flirt with Jack, who doesn’t know if he should look for Dean or respond to Harper.

Then Dean shows up at Harper’s door, which he locks behind him, right before an angry monster starts trying to break it down. Dean and Jack give Harper the short version of “There really are monsters, we hunt them.” A zombie, still in his high school letter jacket, breaks down the door. This is Harper’s old high school boyfriend Vance (Sam Robert Muik). Okay, good old undead jealousy.

Dean fights with Vance while Jack and Harper escape to the library. Harper is impressed that Jack is so intent on saving her, and trying to convince her that she should leave town, maybe with him. Then Harper unlocks the library door and let’s Vance in. Okay, so not good old jealousy in any conventional form. What’s going on here?

Well, as Harper explains, it would never work between her and Jack, because he’s a Hunter and she comes from a long line of necromancers. Vance was her one true love. She killed him when he was going to leave town (she wanted to stay) and then resurrected him. Now he keeps himself alive by eating human flesh, especially guys who show interest in Harper. Harper is planning to let him eat Jack, even though Jack tries to talk her out of it – actually, he’s stalling for time until Dean gets there. Dean’s bullets don’t work on Vance, but silver handcuffs do.

Harper escapes. Dean and Jack dispatch Vance (offscreen) by putting him back in his grave with a silver stake through his heart. Harper, somewhere on the road, writes Jack a love letter. He’s the first guy who’s ever convinced her to see the world. Of course, she’ll have to kill him for killing Vance, but then she’ll resurrect him and they can be together. Since Jack told Harper his hometown before he got to know the real her, she’s got the right post office for sending the letter.

Back at the bunker, while Dean tells Jack they’ll have to watch out for Harper, the “old man” on the whole thinks the young fellow did a good job. Jack feels it’s time he gets sent out on regular Hunting gigs. Dean agrees. Then Jack starts coughing, blood begins streaming from his nose, and he collapses to the floor, unconscious.

What’s wrong with Jack? Tune back in to find out.

Meanwhile, “Optimism” has a lot of fun spinning our expectations around and around. The Dean-Jack pairing, with Jack finding joy in needling Dean and Dean’s reactions, gives us a new dynamic. Jack is just young and naïve enough to believe that Harper has fallen in love at first sight, and the episode sells us on this long enough for the spin to work well. The Sam-Charlie pairing is less humorous, but it’s always a pleasure to have Day back. The Musca is a suitably creepy creature, and its nest is gross as The CW will allow. All round, “Optimism” provides cause for its episode title.