Jensen Ackles gets to be evil 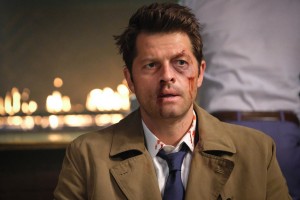 Alternative universe Archangel Michael-in-Dean’s-body (Jensen Ackles) – got all that? – is flying around our universe, testing and destroying any human who doesn’t meet his exacting standards. Sam (Jared Padalecki) is losing sleep while not finding Dean. (He’s also not shaving.) We learn that it’s been three weeks since Dean got possessed so that Michael, using his body, could kill Lucifer. Trouble is, Michael reneged on Dean’s understanding that Michael would get out of Dean once Lucifer was dead.

Mary (Samantha Smith), Sam and Dean’s mom, is trying to keep Sam’s spirits up, but he’s not having it. Sam is also in charge of the alternative universe human refugees who are now all living in the bunker, doing their best to be Hunters in our world. Jack (Alexander Calvert), who had his grace drained by Lucifer prior to Lucifer’s demise, is stuck with no powers, so he’s being taught the art of boxing by alt-u Bobby (Jim Beaver).

Castiel (Misha Collins), trying to get information on Dean’s whereabouts, gets trapped and stomped in a barbecue joint by a bunch of demons, led by Kip (Dean Armstrong).

Having dumped Lucifer when they were in Heaven together, the angel Anael (Danneel Ackles) has returned to Earth and to her for-profit faith healer identity as Sister Jo. She’s alarmed to be confronted by Michael, who asks her what she wants. (This is reminiscent of LUCIFER’s Lucifer asking various people, “What do you desire?” But hey, LUCIFER has borrowed plenty from SUPERNATURAL, so fair enough.) Anael tries to get by, saying she just likes high-end consumer goods. Michael sees that what she really wants is love and family and a place to belong. He finds all of this very disappointing. He was hoping to rally the few angels left on Earth, but if they’re all like Anael, maybe they’re not worth it.

Then there’s Nick. Who’s Nick? Well, he’s played by Mark Pellegrino. He’s the guy whose body Lucifer has been using on and off since Season 5. Evidently, the archangel blade killed Lucifer but left Nick alive (we wait patiently for the explanation of why we’re not seeing all the human bodies of other previously deceased archangels, like Gabriel, for example). Sam and Mary are keeping Nick in the bunker while he recovers from his stab wound. 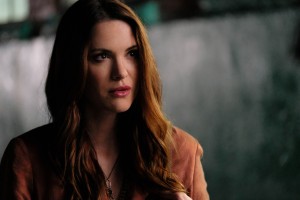 Kip uses Castiel’s cell phone to call Sam. Castiel is alive – for now – but may not stay that way if Sam doesn’t do what Kip wants. Castiel wants to know what Kip is doing. Kip says someone (guess who?) recently asked him what he wanted, and Kip wants everything.

Sam, Mary, Bobby, and alt-u refugee Maggie (Katherine Evans) gear up to go rescue Castiel. Jack insists on going with them. In the car with his mom, Sam asks her to stop saying everything will be all right. Mary replies that she knows Dean is out there, alone and scared. They may never get him back, but if she lets herself believe that, she’ll give in to despair and then she won’t be able to help rescue Dean.

Sam goes into the bar. Jack and Maggie are captured outside. Kip threatens to eat them if Sam doesn’t make a deal with him.

It turns out that Kip wants to be the new King of Hell, with the same deal that he thinks Crowley had – trading some information in exchange for the Winchesters looking the other way while demons make deals. Kip says he’s not afraid of Sam, but the other demons are, so making the deal will help Kip’s status. Sam says no to the deal. Mary and Bobby then come into the bar, weapons blazing and flashing (they have demon-killing knives, natch). There’s a GAME OF THRONES nod when Mary gives Maggie a knife mid-fight and asks if Maggie knows what to do with it. “Stick ‘em with the pointy end?” Maggie asks rhetorically. Jack tries to fight and gets punched in the face by a demon.

Sam finally kills Kip and tells the other demons there will be no new King of Hell, today or ever. If they don’t like it, they can go through Sam. The other demons all promptly eject from the bodies they were possessing.

Back at the bunker, Castiel apologizes to Sam for trying to talk to the demons. Sam doesn’t blame him – he would have done it if he thought of it first. Then Castiel goes to talk to Jack, who is feeling useless without his powers. Castiel tells Jack that his grace (and with it, his powers) should regenerate eventually. Meanwhile, Jack has Castiel and the rest of his family to support him.

Sam gets a call from Anael/Jo, telling him they have a problem. Then we see Michael/Dean, who has finally found someone who’s honest about what they want. He’s met a vampire (Rhett Spencer), who just wants to feed. Well, bloodlust has many negative aspects, but it’s definitely honest.

It’s great fun to see Ackles get to stretch and play another character, which he does with great savoir faire. However, “Stranger in a Strange Land” has to lay a lot of track in terms of setting up everyone’s trajectories at the start of a new SUPERNATURAL season. This might be more lively if so many of our heroes didn’t require pep talks at the same time (it’s a step up from sulking, though). Even so, we’re off to a good beginning.