Not a standout, but quintessential SUPERNATURAL 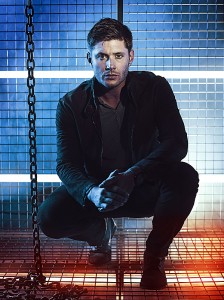 The SUPERNATURAL episode “The Scar” divides its time about equally between the woods of Sioux Falls, where Sam (Jared Padalecki), Dean (Jensen Ackles) and their pal Sheriff Jody Mills (Kim Rhodes) are tracking all sorts of things, and the bunker, where Jack (Alexander Calvert) is learning life lessons.

Dean was possessed by the archangel Michael who, for seemingly no reason, jumped out of Dean’s body. Sam brings a confused Dean back to the bunker. Dean razzes Sam about his beard (cut it out, Dean, the beard looks good). Dean also says he doesn’t remember anything about the time between letting Michael into his body and waking up Michael-less. Neither he nor Sam can figure out why Michael would up and leave.

Dean is surprised to see all the alternate-universe refugees working on Hunting and general this-world life skills. Jack and Castiel (Misha Collins) are of course happy to see Dean. Dean finds twin scars on his right arm, as though he’s been stabbed by a double-pronged blade. Dean asks Castiel to do his “mind-meld” thing and search Dean’s memory. In his vision, Castiel seeks a cloaked figure stabbing Dean with a weapon that looks like a giant tuning fork.

Calling around for info, Sam and Dean find that their friend, Sheriff Jody Mills (Kim Rhodes), has a case of three headless bodies that all bear twin blade marks. This seems the most likely place to look for clues to whoever/whatever stabbed Dean. Castiel stays behind to try to help Lora (Natasha Calis), a young woman who’s been cursed with a rapid aging spell (and terrible false eyelashes – one hates to bag on an actor’s appearance, but this is too much). Jack is not allowed to go with the guys because he’s currently human and is judged to have neither enough grace nor training to be safe. Jack is so aggravated by being left out of the action and feeling useless that he’s ready to run away from home, i.e., the bunker, but he’s intrigued by Lora.

In Sioux Falls, Sam and Dean meet up with Jody. Searching the woods, they find the three heads that go with the decapitated bodies. They are astonished to learn that the heads belong to vampires, as Jody’s tests on the corpses had indicated they were human. (We know from the last episode that Michael is trying to enhance supernatural creatures. This discovery seems to indicate that he’s succeeding.)

Then our heroes are attacked by the cloaked figure, who has great fighting moves and the ability to appear and disappear. When they see the figure’s face, it’s Kaia (Yadira Guevera-Pip), the Dreamwalker who went into the alternate universe to help try to rescue Dean and died there. Well, actually, this is alt-u Kaia. She’s got the double-bladed weapon that stabbed Dean. When not-Kaia sees she’s not going to win, she flees, leaving Sam, Dean, and Jody very confused.

Jody is torn. On the one hand, she promised to alert her adopted daughter Claire to any monster hunting activities. On the other hand, Claire was in love with Kaia, and seeing not-Kaia might be too much for her.

When our group manages to catch up to not-Kaia, Dean punches her in the face and knocks her out. They bring her to an abandoned cabin. Dean is all for torturing her until she tells them what he wants to know – namely, where her weapon is, as that seemed to have had quite an effect of Michael. When not-Kaia wakes, she explains that, like our-world Kaia, she’s a Dreamwalker. They shared each other’s visions. When Jody asks why alt-Kaia killed our-world Kaia, alt-Kaia replies it was an accident. She was aiming for “the blonde,” i.e., Claire. This does not endear her to Jody. Alt-Kaia accuses Dean of being just like Michael. She provides a flashback of Michael-in-Dean’s body trying to get the weapon from her, and alt-Kaia stabbing Michael with the weapon, causing him to have to exit Dean. Michael obviously wanted the weapon because he knew it could hurt him.

Ever since that encounter, alt-Kaia explains, Michael has been sending his new and improved (immune to silver, etc.) monsters after her. Case in point: three werewolves (human-looking except for their teeth) crash into the cabin. They get the better of the boys and Jody. Dean uses his gun to shoot out alt-Kaia’s restraints. Instead of helping, alt-Kaia jumps out the window – but then returns in a second with the double-bladed spear. She stabs one werewolf and decapitates the other two. When she’s thanked for saving everybody, alt-Kaia says she only came back to kill the monsters.

Sam points out that Michael will keep sending his monsters after alt-Kaia. He stops short of offering refuge, which alt-Kaia probably wouldn’t take anyway. She says she’s used to it, and vanishes.

Jody has a broken arm, but she’s dealt with this before. She’s not sure how she’s going to tell Claire that Kaia’s killer (which is still how Jody views alt-Kaia) is in this world, wearing Kaia’s face, no less.

Back at the bunker, the aging on poor cursed Lora accelerates. Castiel and alt-universe refugee Jules (Catherine Lough Haggquist) try a spell to heal her, but it doesn’t work, and Lora dies. Jack feels responsible – if only he still has his powers, he could have saved her. Then he’s sparked by something Lora said. Castiel and Jules had killed the witch who laid the curse with a witch-killing bullet. Jack asks to see the body, which is in the bunker morgue. Jack realizes that the witch was keeping herself young at the expense of her captives.

The amulet around the dead witch’s neck closely resembles the one that Lora wears. Jack theorizes that the curse kept trying to revive the witch, the witch-killing bullet wouldn’t let it, so the curse worked overtime and killed Lora much quicker than it otherwise would have. Perhaps the energy sucked from Lora is in the witch’s amulet. Jack smashes the amulet and Lora revives. Jack is delighted to have done something without powers – and not at all unhappy about having the gratitude of a young woman he finds attractive. Castiel beams with pride at his quasi-son.

When Jules takes Lora home to her mother, Castiel apologizes to Jack for not having been there for him more. Jack, clearly feeling better about himself than he has in awhile, says this is okay. Castiel says that, even without his powers, Jack has just shown himself to have the instincts, heart and soul of a Hunter. Perhaps Jack would like to go with Cass on a Hunting trip? Father/son bonding at its finest. Jack starts coughing. When Castiel expresses concern, Jack says that perhaps this is his first human cold. But when Castiel leaves the room, Jack coughs up blood. Uh-oh. This could be his first human case of tuberculosis, but it’s probably something more supernatural.

Back in the car, Dean goes into a classic self-blame trip, with sympathetic Sam listening. Dean says everything is his fault for letting Michael in – and he does remember more than he let on about being possessed. He was just telling the others he didn’t recall anything because he wanted to just jump ahead to where he could be the hero again and kill Michael.

Now, if we were Sam, we might point out that if Dean hadn’t let Michael in, they would likely still be dealing with a powered-up Lucifer, assuming they were alive to deal with anything. We’re not Sam, and he just offers a “You did what you had to do.” A little more specificity could go a long way here, dude.

“The Scar” is a sturdy set-up episode that clarifies what’s going on with Dean and Jack, establishes a threat to Michael, and leaves time for a little classic Winchester guilt. It’s not outstanding, but it is quintessential SUPERNATURAL.