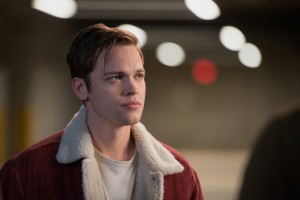 We know both SUPERNATURAL the series and the character of Dean Winchester love movies. So it’s only fitting that the show, and Dean, get around to fighting an office building full of baddies a la DIE HARD in the Season 14 episode “The Spear.”

Homicidal alt-universe archangel Michael, now in a new body (Felicia Terrell), has set up shop in the upper floors of a Kansas City, MO swanky corporate tower, where his goons have killed all the humans. Sam (Jared Padalecki) has persuaded werewolf friend Garth (DJ Qualls) to infiltrate Michael’s organization by pretending to want to be on the “winning side” for the sake of his young daughter, also a werewolf.

At the bunker, Castiel (Misha Collins) finds Jack (Alexander Calvert) in the kitchen, eating Crunch Cookie Crunch cereal in the middle of the night. Castiel thinks this may be because Jack has died and been brought back. Cas says of this process, “We’ve all been through it. It’s kind of a rite of passage around here.” Hey, SUPERNATURAL, if you got it, flaunt it. Jack is worried about the deal Castiel made with the Empty. Castiel explains that the Empty won’t come and take him until he is actually happy (shades of Angel’s curse on BUFFY), which means he could be around for eons to come.

To prove he’s serious about joining Michael, Garth needs to drink the stuff Michael has been brewing up to make super-monsters, a mixture of angelic grace and monster blood. One potential drawback: some monsters explode upon drinking it. Garth, committed to spying on Michael, drinks the stuff and doesn’t go kablooey. Everyone count this as a win.

Michael is planning to kill alternate-universe Kaia (Yadira Guevara-Pip) because she’s got the double-pronged spear that can kill him. Garth hears the spear is at an abandoned plant, and relays this info to the Winchesters. Michael also planning a major hit on the humans of Kansas City on Christmas Eve.

Good news: Ketch (David Haydn-Jones) got his hands on the magic egg that can trap Michael. Bad news: Ketch put the thing in the mail, instead of delivering it in person. Annoying news: the boxed-up egg is now in a mail facility that’s locked up for the Christmas holiday.

Dean (Jensen Ackles) and Castiel go to get the spear, while Sam and Jack go to retrieve the egg. We see that Jack has developed a proficiency in lock-picking.

No sooner do Sam and Jack have the egg in hand then, whammo, Sam gets conked over the head. Yes, it’s a trap. Michael is there and melts the egg. The archangel deliberately gave Garth false information.

At the warehouse, alt-u Kaia gets the drop on Dean and Castiel. She wants to go back home to her universe. Dean lies and promises that Jack will send her back (he knows, but Kaia doesn’t, that Jack doesn’t have his powers) if Kaia will lend Dean the spear. Dean adds that if Kaia doesn’t, she might as well kill him, because if Dean can’t use the spear to kill Michael, Michael is going to kill Dean, and Kaia, and everybody Dean cares about, plus most of the human population. Kaia finally agrees to let Dean use the spear, but says he’d better return it.

Sam calls Dean to explain about the melted egg, getting conked over the head, and Michael’s trap. Also, Michael now has Jack. Sam isn’t sure why Michael didn’t kill him. We’re not sure, either.

Michael’s vampires and werewolves are running around Kansas City, turning everybody they can find. Michael, alone with Jack, isn’t sure what to make of the kid. They are family, after all, what with Jack being part archangel. Michael tells Jack that his powers will eventually return. Jack feels pretty strongly that his family is Sam and Dean and Castiel (well, and Kelly and Mary, but they’re not part of this discussion), and that they’ll come for him.

Sam single-handedly enters the office building and starts taking out Michael’s monsters. Sam rescues Jack, then finds Garth. Garth starts going into werewolf mode – Michael is in his head, trying to make him bite Sam and Jack. Sam is able to choke Garth out. 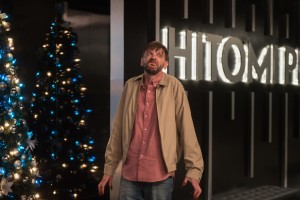 Dean and Castiel arrive in timely manner, so that Sam is able to put the unconscious Garth in Baby’s trunk. Michael used Garth to spy on the group, and now knows they’re all coming. Furthermore, because they’re both angels, Michael can feel Castiel’s whereabouts. So much for the element of surprise.

Our four heroes do a slo-mo power walk, preparing for battle. Castiel goes at Michael first, and Michael proceeds to beat the funk out of him. Sam and Jack go for Michael, and Michael zaps them across the room. Then Dean gets the drop on Michael, with the spear.

But then Dean’s vision fogs up, and he sees flashbacks of when Michael possessed him. Michael jumps out of his current vessel, who slumps to the floor as Michael goes back into Dean. Michael then easily breaks the spear (Kaia is going to be really angry). Michael explains to Sam, Jack and Castiel that Dean had been “squirmy” before, so Michael left. But now that Dean is thoroughly demoralized, Michael is sure he won’t fight back anymore. He says Dean is gone. One thing is clear: Michael hasn’t been watching SUPERNATURAL.

For now, though, Michael has done a good job of demoralizing Sam, Jack, and Castiel. Michael-in-Dean snaps his fingers

“The Spear” is SUPERNATURAL doing DIE HARD halfway; after all, that movie didn’t end with Hans Gruber putting his boot on John McClane’s throat. The episode has a lot of fun with Christmas-themed horror, as well as nodding to the show’s narrative conventions. Ackles clearly gets a lot of joy out of playing Michael’s suave malice, and it’s also always nice to see Qualls return as Garth, adding the character’s loyal nerdy vibe to the proceedings.