The actor talks working on the award-winning comedy series 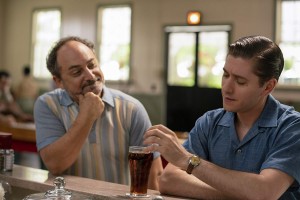 Amazon’s THE MARVELOUS MRS. MAISEL began streaming its third season (the series premiered in 2017) on December 6, 2019; Season 4 will premiere later in 2020. Amy Sherman-Palladino created the comedy series, which stars Rachel Brosnahan as Miriam “Midge” Maisel, a New York divorcee in the ‘60s who surprises herself by becoming a stand-up comedian.

Kevin Pollak plays Midge’s ex-father-in-law, Moishe Moisel, father of failed comedian Joel (Michael Zegen), and owner of the Maisel and Roth Garment Company. Although he’s convincing as a New Yorker, Pollak is originally from San Francisco. Per IMDB, Pollak has 145 film and television acting credits. Some of the more notable ones include roles in BILLIONS, BETTER THINGS, MOM, SHARK, THE SANTA CLAUSE franchise, THE USUAL SUSPECTS, A FEW GOOD MEN, and a dramatic lead as the President of the United States in the nuclear drama DETERRENCE.

Additionally, Pollak is a writer, director, producer, and talk show host. He has done 385 episodes (so far) of his online KEVIN POLLAK’S CHAT SHOW, created and starred in the series VAMPED OUT, made the documentary about comedians MISERY LOVES COMEDY, and directed the feature THE LATE BLOOMER.

As if all this isn’t enough, Pollak is also a stand-up comedian, which gives him professional knowledge of the craft being plied in THE MARVELOUS MRS. MAISEL, albeit not by his character. Asked if he’s provided any insights on doing stand-up to either Brosnahan or the writers, Pollak replies, “For the first time in a very long time, I get to shut up. Because the material is so ridiculous [i.e., great] each and every time. Especially the pressure for [the writers] of surpassing Season 1 – in the cast, we keep saying to each other, ‘I can’t believe this. I can’t believe this.’ And then, just in terms of the stand-up, I think I had a conversation with Luke [Kirby], who does such an amazing job as Lenny Bruce. In terms of Rachel, I will tell you from the stand-up community, it is the one thing that I’ve enjoyed the most, hearing from comedians about how great she is, and they can’t believe she never did stand-up. It’s one of the great compliments.” 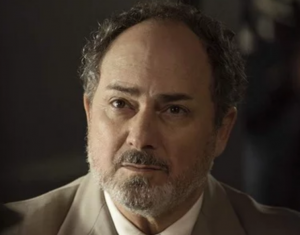 ASSIGNMENT X: What can you tease about what happens for Moishe this season?

KEVIN POLLAK: It bodes really well for Joel, that his father has been made a series regular, you know what I mean? I can’t say much more than that. I will say this, that I think everyone really wants to know. These scripts surpass all expectations. And that is an impossible feat that we were all worried about, quite frankly [laughs], not just as participants, but as fans. And to get scripts and get storylines and the world enlarges, and it does in fact exceed all expectations, which was an impossible task.

AX: The last time we spoke, you were about to direct a documentary, MISERY LOVES COMEDY. How did that turn out?

POLLAK: The documentary premiered in 2015 at the Sundance Film Festival.

AX: And then you directed a narrative feature?

POLLAK: I directed a little comedy after that, THE LATE BLOOMER, where I was a gun for hire. That one went very well, it sold.

AX: You got a chance to do some stand-up at the COMEDY CENTRAL ROAST OF BRUCE WILLIS. You’ve worked together a few times in THE WHOLE NINE YARDS and THE WHOLE TEN YARDS movies. How did the roast experience go?

POLLAK: I was incredibly relieved it went as well as it did. Because it’s not really my cup of tea, what those things are. I loved them in the old days, the Dean Martin version. So when they morphed into a panel mostly made up of people who don’t know the person being roasted, they’re just funny comedians, and their objective clearly was to be as disgusting as possible, it sort of lost all the wonderful charm of seeing Don Rickles rip into Sinatra. So this time around, I said, “I don’t write disgusting, and I’ve known Bruce forever. No one wants to hear about him and I at a barbecue. So have the writers write me disgusting crap.” And they did, and then I rewrote eighty percent of it, keeping several of the premises, which were really kind of great, that I never would have thought of, great premises, and then just tweaking things to make them a little more of mine. But I was very relieved.

AX: Is it awkward to be part of something like that, where a lot of people don’t actually know the person they’re talking about?

POLLAK: I always thought they were awkward to watch. This one, there were only a few who didn’t know.

AX: Could you tell if Bruce Willis enjoyed it or not?

POLLAK: I do. I sat next to him, and I had to give him my pocket handkerchief halfway through, because he was genuinely crying from laughter. And they’re always concerned how the roastee is going to react, I think more so every since Chevy Chase decided it would be funny to frown at everyone. And Bruce was dying. And his three oldest daughters are up front, laughing their heads off, and his mom. I think he genuinely had the time of his life.

AX: What would you most like people to know about THE MARVELOUS MRS. MAISEL right now?

POLLAK: Whatever expectations you have based on how much you loved it [before], they’re going to be met and then gone beyond.