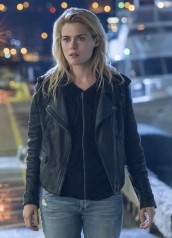 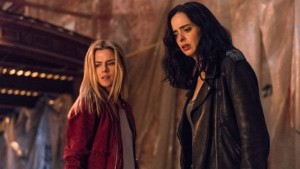 MARVEL’S JESSICA JONES is now streaming the entirety of its made-for-Netflix three seasons on that network. JESSICA JONES concerns a virtually indestructible woman, played by Krysten Ritter, who is a private detective in New York’s Hell’s Kitchen by trade and a reluctant superhero by nature.

Rachael Taylor plays Jessica’s best friend Trish Walker, a former child actress turned radio talk show host, who develops superpowers of her own and takes on the nomme-de-savior Hellcat at the end of JESSICA JONES Season 2. Taylor, originally from Tasmania, has also starred in PARK AVENUE 666 and the short-lived TV reboot of CHARLIE’S ANGELS, and appeared in films including RED DOG, TRANSFORMERS, SHUTTER, and FINDING STEVE McQUEEN. Netflix also cast Taylor to star in its original science-fiction telefilm ARQ.

Like the rest of Netflix’s series based in the MARVEL’S DEFENDERS-verse, JESSICA JONES was canceled in 2019, due to Disney’s merger with the Marvel brand and the advent of Disney+. We caught up briefly with Taylor to talk to her about her time as Trish, before the series’ cancellation was announced.

ASSIGNMENT X: How is it being part of a Marvel superhero series?

RACHAEL TAYLOR: Very flattering. Obviously, I feel incredibly grateful and excited, and really I felt from the beginning, because of [JESSICA JONES series creator/show runner] Melissa Rosenberg’s amazing pilot script that this was really a game-changer for me. Today’s a good day.

TAYLOR: No, I think it’s great. I think it actually has some really interesting character implications, because obviously, Trish Walker used to be a child star. And what an interesting choice for someone who’s so used to being in the public eye, to then decide to go and have radio be her medium. And I think that really speaks to her – she’s got this altruistic streak, in a way. I think she wants to give a voice to people. I learned a lot from her character, based on her occupation choice.

AX: Are you happy about JESSICA JONES being a show that passes the Bechdel test, meaning that it’s got women talking together about something other than men?

TAYLOR: Totally. No boys, no shoes. Yeah. I think Melissa has just done such a masterful job of bringing female characters to life in a nuanced and complex way. And they’re not perfect. They’re not just simple best friends. There are layers of different complexities in there, there are layers of jealousy and co-dependency. There’s plenty to play with as an actor. 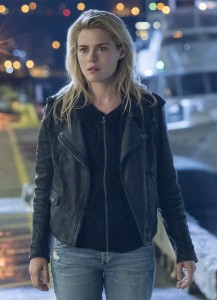 AX: What can you say about the Netflix telefilm ARQ?

TAYLOR: It’s a really different character to Trish Walker, so that’s a nice thing, to be able to mix it up. It’s really a contained relationship drama at its core, but there are some fruity science-fiction strands in there.

AX: And what would you most like people to know about JESSICA JONES?

TAYLOR: Just that I think it’s an important and relatable series for both women and men. I think what’s so great about what Marvel does is, it’s always about the man behind the mask. It’s not this idealized version of what superhero characters are, as much as it’s about these nuanced, complicated characters. And in that I think that there’s something for everybody to relate to.