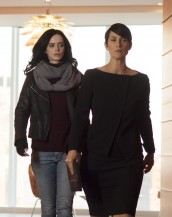 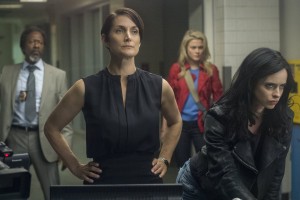 In Netflix’s JESSICA JONES, Carrie-Anne Moss plays uber-lawyer Jeri Hogarth. Hogarth is the employer of the super-strong title character, who’s played by Krysten Ritter. Hogarth is also truly ruthless, a trait that is its own kind of superpower in the Marvel Cinematic Universe. Moss appears as Hogarth in an episode of the second season of DAREDEVIL; she and Ritter both reprise their characters in the Netflix multi-Marvel-superheroes series THE DEFENDERS, which is currently shooting.

Moss, who shot to fame as Trinity in the MATRIX films, appeared on the big screen earlier this year in the horror film THE BYE BYE MAN; she’s also a regular in the second season of HUMANS, which premieres February 13 on AMC.

ASSIGNMENT X: What were some of your considerations in signing on to play Hogarth?

CARRIE-ANNE MOSS: I think you really have to look at who’s running the show, and you have to say, “Can I trust this person?” Like the MATRIX franchise, I trusted [its creators/directors, the Wachowski siblings]. When I look at MEMENTO, I trusted [creator/director Christopher Nolan]. And I don’t trust people easily. It’s not like I just give that. I’ve done lots of jobs where I didn’t trust the person at the front at all. And I wanted to, but I didn’t. I don’t just put that on to whoever is running it. But I did know right away that these guys [on JESSICA JONES] were worth trusting. And that is the key for me. Because then I can do my job. I can find the character and I can explore it, but I don’t have to be worrying that maybe the person has no clue what they’re doing. Which happens.

AX: What is the key for you to playing Hogarth?

MOSS: Well, so much of it was in the writing. Literally getting into the clothes – great clothes, structured – I mean, I don’t dress like that. They cut my hair. I was shocked at how much a hairdo just made me go, “Oh.” My hair was down to here, very bohemian. I’m kind of an earthy person. So to bring in all of that and then just to own a room, and to know that anyone in the room doesn’t intimidate me, that’s her. And she could do whatever she wants.

I felt a responsibility just to play a human being. The most important thing to me was that I didn’t play her clichéd, that she wasn’t written clichéd. But I feel that way about every character I play. If I play a mom, I don’t want to play the cliché of the mom. If I play a doctor, whatever the part is, I don’t want to ever play the cliché of that character, the idea of a character. It’s hard to not sometimes. I knew they weren’t going to write it that way.

AX: Did they tell you at the beginning that Hogarth was going to get quite so dark?

MOSS: They intimated she would. They didn’t have any details, but they said she was going to have an interesting, twisty kind of journey.

AX: Going forward, can you say how Hogarth’s Season 1 experiences may or may not have changed her?

MOSS: I don’t know – I have no idea. I’m the worst. I know nothing. They really haven’t told me anything. As you know, Marvel’s so secretive anyway, but [JESSICA JONES developer/executive producer] Melissa [Rosenberg] hasn’t given me even a slight, tiny bit.

AX: Do you know if you’re going to be appearing any of the other Netflix Marvel shows?

MOSS: Well, I’m doing IRON FIST. I just did an episode of IRON FIST and that was fun.

AX: What was your favorite part of Season 1?

MOSS: I loved working with Krysten. That’s a friendship that I’ve developed that I adore. And watching it, I loved watching her performance. I thought she really just blew it out of the water.

AX: Favorite stuff that you got to do?

AX: And what would you most like to say about JESSICA JONES?

MOSS: Totally thrilled to see what happens for Season 2. I just know, knowing Melissa and the quality of the writers that she has, I’m excited to see it go to a whole ‘nother level.