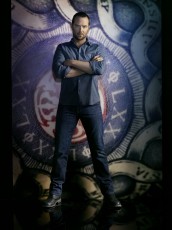 The star and the producer talk Season 2 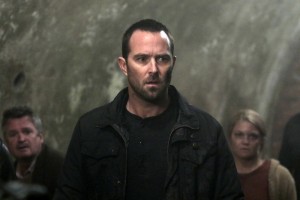 Alas, FBI Special Agent Kurt Weller. The BLINDSPOT leading character, played by Sullivan Stapleton, has just had his girlfriend Nas (Archie Panjabi) break up with him. On the bright side, in the NBC series’ second season on Wednesday nights, Weller is starting to trust the tattooed woman often known as Jane Doe, played by Jaimie Alexander.

ASSIGNMENT X: How much does Weller trust Jane at this point?

SULLIVAN STAPLETON: It’s in your job [laughs]. I think Weller thinks he’s the only good guy, and everyone else is the bad guy. We don’t know. There’s a time jump of a few months. She’s just come back. So it’s a lot of bad water under that bridge.

SCHECHTER: Trust is a big issue this season, for a multitude of very fair reasons.

AX: Do you think those feelings for Jane are still there, after his romance with Nas?

STAPLETON: She kissed me. They just don’t have that closeness. He’s been betrayed.

SCHECHTER: But I would say that hopefully there will be many years of BLINDSPOT where, in a realistic fashion, feelings can change. We’re well aware of our “Jeller” fans and don’t want to –

STAPLETON: You can always mend any problems in relationships.

SCHECHTER: We have two of the most attractive leads on television. It’s very hard for them not to show attraction to each other.

SCHECHTER: Yeah. As [BLINDSPOT creator] Martin [Gero] jokes, it’s the only writers’ room where you’re allowed to have a life-sized naked picture of a woman without it being sexual harassment. We have all the tattoos marked. There are life-sized pictures, there’s a book of tattoos. But the other thing is, once you’ve solved one, you can actually unlock a new mystery of how they work together.

SCHECHTER: We have some of that stuff. We have a lot of it. But it’s hard. Before we shot the pilot, we had to design all the tattoos, so there’s a lot we know, and then some things we left, symbolism that’s open for the writers.

AX: Have you had discussions about, “What do we do if we run out of tattoos?”

SCHECHTER: We’ll never run out of tattoos. People haven’t even seen the tattoos on the bottom of her foot.

AX: Does Weller have any tattoos?

STAPLETON: No. Not that we know of. 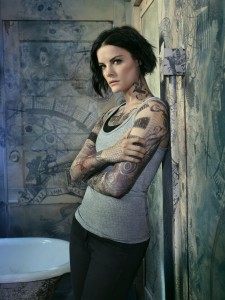 AX: You are an executive producer on BLINDSPOT with Greg Berlanti. Do you work on the CW DC shows with him as well?

SCHECHTER: Yeah, all of them.

AX: Which is more difficult – keeping all of the plot strands and clues straight on BLINDSPOT, or keeping the four shows in the CW-verse straight?

SCHECHTER: I think they both use different parts of your brain. We know what’s going to happen all season, so it’s not hard to keep straight at this point. [to Stapleton] I’m not telling you. You have a big mouth.

AX: No spoilers for what’s coming up, but did you have a favorite scene or episode in Season 1?

STAPLETON: Yeah. My father, some of that stuff. And then in the finale, basically finding the bones of this little girl that [Weller’s father] had murdered, and also finding out that Jane is not Taylor Shaw. That episode was by far [the favorite].

SCHECHTER: My favorite was the first time you met Rich Dotcom [Ennis Esmer] and you were both all dressed up when you went undercover at the party, with the helicopters. That was fun.

STAPLETON: Yeah, for different reasons. That was definitely the most fun.

SCHECHTER: But as an actor, learning your father was a child killer …

STAPLETON: Yeah, to sit there and do that, and then have the poor director going, “That’s awesome, so can we do it again?” [laughs] That’s the joy of this job.

AX: And what would both of you most like people to know about  BLINDSPOT Season 2 going forward?

SCHECHTER: It’s going to be even better than Season 1, but if you liked Season 1, you will love Season 2.