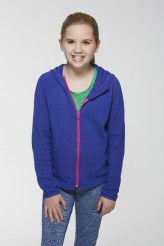 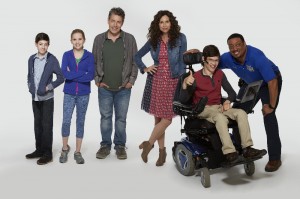 Prior to SPEECHLESS, Kenedy has also had arcs on THE NEW NORMAL and THE NIGHT SHIFT. The young actress from Charleston, SC, was also in six episodes of THE WALKING DEAD, where she memorably portrayed Mika Samuels.

ASSIGNMENT X: Have you played a character like Dylan before, or is she sort of new for you?

KYLA KENEDY: She’s sort of new. I mean, I was on THE WALKING DEAD for awhile, but obviously, that was very different. I’m the one who got killed by my sister [Lizzie, played by Brighton Sharbino], who was bananas.

KENEDY: It was great. I loved it, it was so much fun. I mean, everybody on that set is so polite, and they’re kind of like a family, so I really enjoyed getting to work on that set.

AX: Did they tell you when you were cast on THE WALKING DEAD that your role might not last that long?

KENEDY: You kind of get the gist when you go in there [laughs]. You know chances are you’re going to die when you’re on the show.

AX: On SPEECHLESS, Dylan is very dedicated to running track. In real life, are you a track person?

KENEDY: I love to run. Athletic stuff is my favorite thing to do. It’s funny, when I found out I was doing a screen test for the role, I started doing laps around my neighborhood a day. I had three days to prepare, so I’d do ten laps a day, just to get the gist of it, but I never did track before. But it’s pretty fun. I think I might start.

AX: What do you normally do, sports-wise?

KENEDY: Well, at school, I like volleyball, it’s really fun. I’m not on a team, but it’s one of my favorite things to play. Football is fun. I play that with my dad a lot. And I love to swim.

AX: Dylan seems like she’s not as bothered by the mother’s focus on JJ as Ray is …

KENEDY: Yeah. With [Ray] being also the brother of J.J., you have two brothers competing for attention. I feel like with Dylan being the only girl in the family, she kind of has a special little connection with her mother, even if they don’t spend as much time together, she’ll always have that little special connection, and you’ll definitely see in further episodes how Dylan tries to emulate her in several ways and how she really looks up to her.

AX: So is Dylan also an advocate for JJ, or does she just take that hard-charging attitude into anything she’s confronting?

KENEDY: I think she’s really, really compassionate for her brother, but also, she knows he can do anything he wants to just as [normally] as anybody else, and she knows that he’s not different, he can do anything he wants, you shouldn’t treat him differently, so she definitely is a strong advocate for that, but she also just goes through life as though nothing’s wrong, because there really isn’t anything.

AX: How old is Dylan, and how old are you in real life?

KENEDY: I believe she is thirteen on the show. I actually am thirteen. The age was kind of different when I was auditioning, because they didn’t know if they wanted to go with a boy or a girl yet, so it was a wide range.

AX: Do you know what it was about you that persuaded them to go with a girl generally, and you specifically?

KENEDY: I don’t know. As soon as I went in there, I instantly felt a great connection with [creator] Scott [Silveri] and [co-executive producer] Chris [Gernon]. They’re just such great people, and they really know what they’re doing, and I really loved the script, so I really felt that it was such a great role, and I was really excited that I got the opportunity to play Dylan.

AX: Were you familiar with Minnie Driver’s work before you began playing her daughter on SPEECHLESS?

KENEDY: Absolutely, yeah. I was so excited to get to work with her. It was great.

AX: Do you have a favorite kind of animal?

KENEDY: Let’s see. I’m obsessed with sloths. Sloths are pretty cool. I like them. They’re pretty cool animals. They just really eat and relax all day, that kind of a life [laughs].

AX: Besides volleyball and football, do you have other hobbies?

KENEDY: I love to read, and this is kind of a weird thing, but I do like to collect rocks. I know this is very strange, but I find it very fun, so that is something I do.

AX: Do you think they might work that into the show?

KENEDY: That it’s a great family show and, really, anybody can watch it. It’s honestly the perfect show to watch before your kids go to bed or while you’re winding down, it’s a lot of fun and you’ll laugh a lot.