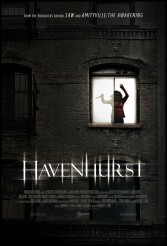 Horror that tries to have it both ways 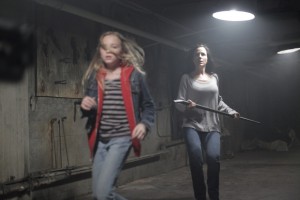 There is, of all things, what seems like a good mystery novel at the heart of HAVENHURST. Because of the movie’s structure, this may not be evident while we’re watching it. However, one of the key clues is ingenious. Unfortunately, the rest of the film, directed by Andrew C. Erin and written by Erin and Daniel Farrands, doesn’t have ideas that rise to this level.

In HAVENHURST, Julie Benz plays Jackie, a woman recovering from tragedy at the same time that she graduates from rehab for alcoholism. Jackie is referred to a gorgeous old apartment building in New York, on Havenhurst, which apparently serves as a stepping-stone for outpatient recovery.

The landlady, Eleanor Mudgett (Fionnula Flanagan), seems relaxed about both rent and references. Her only requirement of the tenants is that they be “good,” refraining from succumbing to addiction and/or engage in illegal acts. Should the tenants disappoint, Eleanor has ways of finding out. We know from the film’s opening that eviction is a far more drastic and immediate process than having sheriff’s deputies show up.

Jackie is already looking into the disappearance of her friend Danielle (Danielle Harris). Danielle, due to a coincidence that never turns out to have a story purpose, was living in the same apartment that is now given to Jackie. As Jackie investigates, she also befriends a young neighbor girl, Sarah (Belle Shouse), whose foster mother’s boyfriend is in definite violation of the housing requirements.

Benz is a powerful, empathetic performer, and Erin works up some good atmosphere and scares. The way things work in the building are quite creepy; again, there’s real creativity here, but the set-up is so messy that it’s a bit of a letdown rather than a thrill once we finally get it.

HAVENHURST is also paced in a way that allows viewers way too much time to think and ask questions. It’s a huge building, but we see almost no tenants. It remains unclear from beginning to end how much time tenants have before “eviction” once they lapse. There are also hints that something supernatural is happening – a torture sequence has a human still living after something that is, as doctors would say, “incompatible with life” – yet this is contradicted by revelations elsewhere. The more we learn about what’s happening in the building, the more we wonder why the police haven’t been all over it long ago (a question underscored by the fact that Jackie’s police detective friend, played by Josh Stamberg, is involved).

There’s also a big discovery by Jackie that’s supposed to be a plot fulcrum, but winds up being totally unnecessary given everything else going on. Then there’s the tag at the end, which doesn’t pay off as it should.

HAVENHURST evokes some dread, but it’s ultimately basic-model horror, without the proper planning to make it anything more.