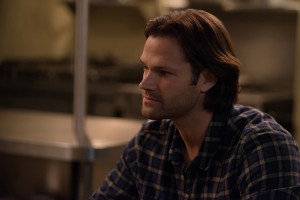 After the shaman’s spell and Gabriel’s grace don’t work, Jack (Alexander Calvert) is dying in the SUPERNATURAL episode “Byzantium.” Dean (Jensen Ackles) is so upset he leaves the room, and Castiel (Misha Collins) goes after Dean, and thus only Sam (Jared Padalecki) is with Jack when he actually passes.

Then Sam becomes so upset that he leaves the bunker, alone. Dean and Castiel go after Sam, who has tried to build a pyre all by himself and succeeds only in breaking his axe. Dean declares that they will give Jack a Hunter’s funeral (burning the body) tomorrow. Tonight, they will all get drunk at the bunker. Which they do. Plus eat candy bars. Hey, everybody deserves to be able to grieve in their own way.

Jack is temporarily happy in what seems to be Heaven. He’s unaware that he’s died; in his Heaven, he’s eating a burger with Dean, Sam and Castiel. Dean is trying to teach him how to read a paper map, when Jack’s vision gets shaky and the sun starts blinking. Jack realizes something is wrong and flees into a long white corridor, which starts filling up with black goo. Jack tries to outrun the goo. Jack finds himself with his mother Kelly (Courtney Ford). They are delighted at this reunion at first, though Kelly is horrified that her boy died young.

After an epic bout of drinking, it occurs to Sam that angel expert Lily Sunder (previously played by Alicia Witt, now played by Veronica Cartwright) may be able to help them bring Jack back. Lily has stopped using the magic she gleaned from studying angels, and has aged considerably as a result. The magic drew from her soul, which diminished it. Lily offers her aid in exchange for the boys getting her into Heaven. She believes she’s going to Hell, but her little daughter (killed by an angel, which is why Lily started killing angels, though she’s stopped doing that lately) is in Heaven, and Lily wants to be with her child. She thinks if Jack gives up a little of his soul (not nearly enough to make him soulless), he may be able to come back to life. 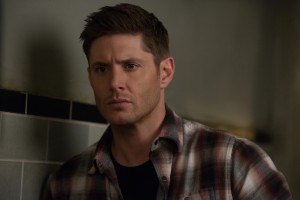 Everybody summons Anubis (Sean Amsing), the Egyptian god of the dead, who turns out to be an accountant type, armed with an abacus. With God still absent, Anubis is technically in charge of who goes to Heaven or Hell, but it’s really up to the abacus, which weighs people’s souls. Lily, per the abacus, is going to Hell. Since there’s nothing Sam and Dean can do about it (there’s no point in trying to threaten Anubis), Lily says she’s not going to help them and leaves.

Castiel goes to Heaven to try to retrieve Jack. Naomi (Amanda Tapping), the angel running Heaven at present, is irate at Castiel for having awakened the Empty, the conscious aspect of Big Empty, where angels and demons sleep for eternity after they die. The Empty wants Jack, as he’s half-angel. The Empty has therefore attacked Heaven in the form of the black goo. The goo gets into the body of angel Duma (Erica Cerra). Castiel offers himself to the Empty in Jack’s place. The Empty accepts the deal, but says it will only come for Castiel once Castiel has allowed himself to be happy. (If the Empty succeeds in taking Castiel under those conditions, there must be an episode coming up about Hell freezing over.) Castiel tells Jack that he shouldn’t tell Sam and Dean about the deal he made.

Meanwhile, Sam and Dean appeal to Lily’s better nature. Jack is essentially their kid. Lily knows what it’s like to lose a child – why would she want to put other people through that kind of pain?

Lily agrees to do the spell. Using magic kills her, but because she did it with no hope of reward, this actually changes her destination, and she is reunited with her little girl in Heaven.

Naomi is grateful to Castiel for getting the Empty to return from whence it came. As a reward, she gives him Michael’s Earthly location. Jack says goodbye to Kelly, and returns with Castiel to the bunker.

“Byzantium” accomplishes the tricky task of getting Jack to actually meet his mother in person, which feels like something SUPERNATURAL has been aiming for pretty much since the Nephilim was born. It’s very satisfying. The Big Empty/Nothing makes for a formidable new kind of menace.

But what may be best about “Byzantium” is that it tackles, in proper SUPERNATURAL style, the question of what “good” actually is. If a person is good in order to get into Heaven, are they actually being good? Does a person have to know they’re damned in order to be truly selfless? These are questions that theologians have been wrestling with for centuries, and here they’re broken down into easily understood but still resonant character beats.