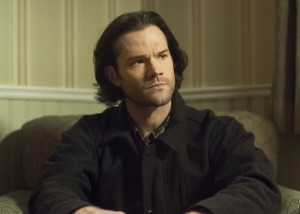 Dean (Jensen Ackles) is in a coffin-like box that is filling up with water. The only light is from his cell phone. The lid is being crushed under the weight of the water around it. Dean is screaming for Sam (Jared Padalecki), but Sam does not come. And then Dean wakes up.

Dean, of course, has been dreaming about the Malek box, where he plans to have himself locked up for all eternity, and then have the box dumped into the ocean for good measure. This way, when archangel Michael eventually escapes from Dean’s mind (where he’s presently trapped), he still will be trapped in Dean’s dead vessel and won’t be able to do any harm.

In Iowa, a man – we’ll later learn his name is Tony Alvarez (Nick Hunnings) – is drowning a woman, then drawing her blood in boiling water in ritual sacrifice. Okay, this fellow clearly going down.

Nick (Mark Pellegrino), Lucifer’s former vessel, is in police custody. He’s currently in the hospital, because he’s been shot in the leg. He refuses to believe he’s at fault for any of the crimes he’s committed. It’s not that Nick denies killing and almost killing quite a few people at this point in his quest to rejoin with Lucifer, it’s that he thinks his actions are justified.

Meanwhile, Dean (Jensen Ackles) asks Sam (Jared Padalecki) if he’s still on board with Dean’s plan. Sam is clearly not happy about it, but says yes. When Dean is out of the room, Sam calls Castiel (Misha Collins). Dean somehow doesn’t realize that of course Sam told Castiel, hoping that maybe the angel and Rowena can figure out a solution that doesn’t involve Dean entombing himself. Castiel reports no luck so far.

Our ritual killer takes another victim, chanting about the gods of Egypt.

Alone with Sam, Dean starts going over incidents in their childhood where Dean feels he let Sam down. Sam says, “If we could not have conversations that sound like deathbed apologies, I’d really appreciate it.” We’re with you on this, Sam.

Sam decides that what he and Dean should do before Dean boxes himself up is take on a case. Sam finds the case of our killer, who apparently is patterning his murders after the Biblical ten plagues of Egypt, and has been carving Enochian symbols into his victims’ chests.

Nick, at the hospital, prays to Lucifer. Perhaps the prayer is answered, because Nick is able to best his guard and escape from custody.

The brothers go to visit Eddie (Josh Collins), the surviving twin of Alan, the second sacrificial victim. Eddie tells the boys about his and Alan’s very religious friend Tony. There’s even a photo of the twins with Tony, who’s got a big Enochian tattoo on his arm.

Dean calls Castiel, who says he knows about Dean’s awful plan. Never mind that, what’s going on with Tony Alvarez. Well, it turns out that Tony is next in line to be the Prophet of the Lord after Donatello Renfield (Keith Szarabajka). Except that instead of dying, Donatello is just on life support at the hospital, so his current state seems to be messing up the prophet lineage.

Sam and Dean go to Tony’s home, where there are Polaroids of potential victims and Enochian writings all over the walls. Dean and Sam find Tony with his next intended victim. Dean rescues the victim while Sam tackles Tony. Tony has been hearing voices and thinks they come from God. Sam and Dean can assure him that they’ve actually talked to God, and whatever Tony is hearing isn’t Him. Rather than try to deal with what he’s done, Tony grabs Dean’s gun and fatally shoots himself.

Castiel tells the guys that the “natural order has been upset” by Donatello’s neither dead nor alive state. To get the Prophet situation back on track, they may have to kill Donatello outright. 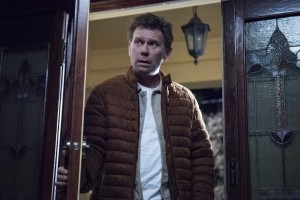 Meanwhile, Nick goes to visit his old house. It’s cold and full of mist – and inhabited by the ghost of his wife, Sarah (Jaycie Dotin). Sarah is held here by unfinished business. Nick says he got justice for Sarah and their daughter’s death by killing Abraxis (not to mention a whole lot of innocent people). But Sarah’s unfinished business is that Nick chose Lucifer. If Nick rejects Lucifer, Sarah can go on to the other side. Nick, however, just can’t do that, so Sarah is stuck while her spouse goes off to search for his former tenant.

Sam and Dean get to the hospital where Donatello is on life support. Here they find Dr. Novak – that’s Castiel. Castiel is angry at Dean for his horrible suicidal misery-making plan. Dean is angry at Castiel for being angry with him. This is as classic as “Carry On, Wayward Son.”

Donatello comes out of his coma far enough to speak some Enochian. Castiel believes that if Donatello is even slightly conscious, perhaps he can be healed. Sure enough, Castiel does his thing and Donatello wakes up. He still doesn’t have a soul, but his craving for fried chicken is intact, so he seems more or less back to normal. Donatello is of course confused as to what’s been happening lately, which is understandable.

With the case of the week and the prophet situation (both intertwined) wrapped up, Sam and Dean have a beer outside the Impala. Sam finally lays into Dean. “What you’re doing is wrong, it’s quitting.” Sam goes so far as to punch Dean. When he tries to punch Dean again, Dean finally stops him. Sam starts crying and says, “I believe in us. Why don’t you believe in us, too?”

Holding the sobbing Sam, Dean says, “I do believe in us.” As they’re joined by Castiel, Dean adds, “I believe in all of us.” Dean agrees to stop his suicidal quest, for now, though he says he needs Sam and Castiel to help him if it does come down to that being the only way to stop Michael. For now, though, they’re all going home.

Well, that’s an enormous emotional eruption, and a welcome one. Nobody sulks, they just go right into rage and grief and love. It’s honest, and it’s moving, as well.