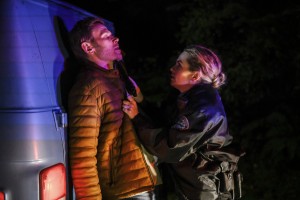 As the SUPERNATURAL Season 14 episode “Damaged Goods” begins, Dean Winchester (Jensen Ackles) is clearly suicidal. How can we tell? He’s hugging people. Is it because of what he read in the book from Death’s library about what he has to do to save the world? What do we think?

Before we get to what’s wrong with Dean, we see Nick (Mark Pellegrino), formerly Lucifer’s vessel, torturing a demon for information on a bigger demon, Abraxis, last seen in Hibbing, MN.

Dean hugs brother Sam (Jared Padalecki), who’s doing research on angels in the bunker library, in hopes of figuring out how to get the archangel Michael out of Dean’s head without letting Michael end the world.

Then Dean goes on a road trip to see their mom Mary (Samantha Smith), who is hanging out in the cabin of their friend Donna (Briana Buckmaster) just outside Hibbing. Sam offers to go with him, but Dean says he really wants some alone time with their parent.

Sam notices Dean has taken books from bunker library. Since Dean is not a big reader, this would be worrying enough without the hug. Sam calls Mary, who isn’t sure what to make of her younger son’s concerns.

En route to Mary, Dean gets together for a burger with Donna. Sheriff Donna’s been having a little bit of a hard time since her once-adoring deputy abandoned her once he found out about the supernatural aspect of her life. Donna knows Dean has been having a rough time, too (Sam called her). Dean hugs Donna before heading onward.

Dean arrives at the cabin. Mary suggests they invite Sam up as well, but Dean says he doesn’t want Sam there – again, Dean claims he wants some private time with Mary. He asks her to go get groceries to make her terrible Winchester Surprise meal, which he remembers from childhood. (That it’s terrible is part of its nostalgic charm.) While Mary is gone, Dean starts constructing something (it’s not clear what) in the cabin’s shed.

Nick shows up in town, asking about Mary’s whereabouts. A grocery clerk denies to Nick that he knows the Winchesters, but then calls Donna. 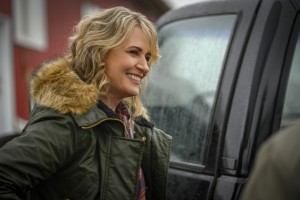 At night, Donna pulls Nick over, not knowing who he is, but knowing he stole the van he’s driving, and that he’s been asking about Mary – Nick gets the drop on Donna and knocks her out.

At dinner, Dean tries to keep the conversation light. Mary tries to draw Dean out about whatever is bothering him, but Dean doesn’t want to talk about it.

Once Dean is sleeping off his portion of Winchester Surprise, Mary goes outside, is drawn to the shed, looks at Dean’s books and what he’s been making, and is clearly not happy. She doesn’t have too long to remain that way, though, since Nick confronts and kidnaps her.

Sam arrives at the cabin in time to encounter Dean, who has just been alerted by phone that Nick has taken Mary. The brothers set out to find their mother and her abductor.

Nick has Mary in his van. He’s learned that she is the one who took on Abraxis way back when. At first, Mary lies and says she killed the demon, but Nick finally gets her to admit that she trapped Abraxis in an Enochian puzzle box, which she put in a storage facility.

Donna joins up with the Winchesters. A radio call gives them the location of Nick’s van – at the storage facility, of course. Mary refuses to open the box and reminds Nick that, even if he could open it, the demon needs a host to communicate with him. Mary is warded all over her body to prevent demonic possession. Nick’s solution is to grab a storage facility employee and drill a hole in the box. Presto, Abraxis is unboxed and rehomed in the employee.

Nick wants to know why Abraxis killed Nick’s family. The demon agrees to answer Nick’s questions – if Nick kills Mary. Nick is happy to oblige, but Sam, Dean and Donna show up in time to mount a rescue. To gain time to get his answers, Nick breaks the demon trap keeping Abraxis in line. Freed, Abraxis tells Nick that he was acting on orders from Lucifer, who presumably wanted to make Nick despondent enough to agree to be Lucifer’s vessel. Abraxis says that Nick apparently was chosen at random.

Abraxis then tries to kill everybody, but Nick stabs him with an angel blade. (Really, Abraxis, Nick goes to all this trouble to find out who killed his family, and it doesn’t occur to you he might want revenge?) Donna shoots Nick in the leg, bringing him under control (temporarily, at least).

Now that this crisis is dealt with, Mary takes Dean aside and tells him she knows what he’s been building in the shed. If he won’t tell Sam, she will.

So Dean takes Sam into the shed and explains he’s built a Malek box, which is so powerful that it can contain an archangel, forever. Dean’s plan is to have Sam lock him up inside it, so that when Michael breaks free of the trap in Dean’s mind, they’ll both be trapped in the Malek box for eternity.

No surprise, Sam is appalled. He’s also angry, because even though he didn’t know about the Malek box, he already figured out that Dean was going to do something self-destructive, and hadn’t even told Sam about it. Dean admits he didn’t tell Sam because Sam was the only person who could have talked him out of it, and Dean is determined. He says that Sam can either help him, or he’s doing it alone, but either way, he’s doing it. The alternative is to wait until Michael escapes and then destroys the world. Sam finally, unhappily agrees.

We’ve been down this road a few times before, but it’s still a potent ride. Dean is looking at a fate worse than oblivion, and arguably just as bad as Hell (well, at least Michael can’t make him torture anybody, probably). Poor Sam is essentially blackmailed into helping – it’s that or leave Dean alone in his last days on Earth. And Nick – well, it seems like he’s been taken on a really convoluted path, but we’re never going to quibble with SUPERNATURAL’s use of the superb Pellegrino. “Damaged Goods” is definitely tune-in-next-week TV.