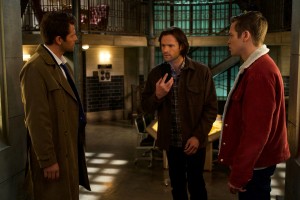 To paraphrase Oscar Wilde, to have Dean (Jensen Ackles) possessed once by the archangel Michael may be regarded as a misfortune; to have him possessed twice within the span of eight episodes looks like carelessness. Well, okay, it’s still a misfortune, and not really the guys’ fault, but still, haven’t we handled this once already?

Per the SUPERNATURAL Season 14 episode “Nihilism,” turns out that no, we haven’t. The episode starts out with Dean seemingly himself, enjoying running Rocky’s Bar with Pamela Barnes (Thunderbird Dinwiddie). (Note: real-life Ackles actually has his own bar in Austin, Texas.) Pamela evidently is Dean’s girlfriend. Wait, wasn’t Pam the helpful psychic who got blinded by Castiel’s return and then later got killed way back in Season 4 as a result of Dean’s actions? She seems fine, too. Dean and Pam take out a couple of vengeful vampires. Pam reminds him that Sam (Jared Padalecki) and Castiel (Misha Collins) are out Hunting.

In the real world, Michael-possessing-Dean (let’s just call him MPD) is torturing Sam, Castiel and Jack (Alexander Calvert) in his office tower suite. While MPD is beating Castiel, Sam manages to get his lighter out and temporarily sets MPD on fire. It’s not enough to harm either Michael or Dean, but it distracts the archangel long enough to get a set of angel cuffs on him. MPD scoffs that this won’t hold him for long.

MPD’s monsters are trying to break into the suite. Sam calls on the Reaper who’s keeping watch on them. Turns out they’ve got a new Reaper, Violet (Panta Mosleh), who seems sympathetic, but says she can’t help. Then Violet apparently receives orders from someone else, and the next thing we know, Sam, Castiel, Jack and MPD are all back at the bunker.

Alternate-universe refugee Maggie (Katherine Evans) calls in to report that Michael’s monsters have stopped trying to turn everyone in Kansas City, Missouri, into monsters. Now all the monsters are instead headed to the bunker. Whee.

Sam is concentrating on the more immediate problem of how to get Dean out of being trapped in his own head. Sam remembers that when he was possessed by the angel Gadreel, Crowley went into Sam’s mind to get him out. Alas, Sam doesn’t have Crowley’s powers.

MPD tries to do a number on Jack, saying that Dean was relieved when Jack died, because it meant that Dean wasn’t burdened with having to take care of the young man/angel anymore.  Castiel tells Jack not to believe anything MPD tells him.

Maggie and the alternative-universe Hunters are trying to prevent Michael’s monsters from reaching the bunker.

Dean’s fantasy is on a loop. A woman comes in and tries to buy the bar, he tells her no, then he and Pam kill vampires, everything is awesome. 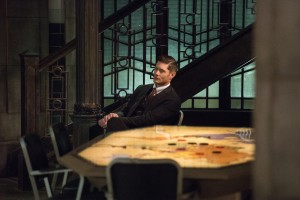 MPD and Castiel have a conversation, with MPD relating how angry he is that God didn’t come back when Michael prevailed over Lucifer in the alternate universe. MPD’s theory is that God/Chuck is a writer, and both his alternative-universe world and our world are failed drafts that God doesn’t care about anymore. MPD wants to burn God’s creations, then kill God. So “Nihilism” is well-titled – you can’t get much more nihilistic than that.

The Men of Letters has a machine for getting into people’s minds. (That bunker has everything!) Leaving Jack as lookout, Sam and Castiel use the machine to try to get into Dean’s mind. At first, they appear to be in the Big Empty, a place without light or sound. Castiel uses his powers to hear Dean’s thoughts. We all hear Dean screaming. Sam has a flash of insight – if Michael wanted to keep Dean distracted, he wouldn’t torture Dean, Michael would make him happy.

Sam and Castiel start hearing unfamiliar thoughts from Dean that wouldn’t seem to apply to any known adventures. Sam and Castiel track these thoughts and find Dean in his happy bar-owning fantasy. Dean welcomes his brother and Castiel. Sam tries to get Dean to see that this isn’t real. The vamps attack, Dean gets rid of them, the vamps disappear. Dean finally remembers that Pamela was blinded. When Sam reminds Dean that Pamela died helping them, Pamela finally vanishes. Dean still isn’t entirely convinced. Castiel gives it a try.

Then Sam says “Poughkeepsie,” the Winchester safe word for, “We’re really in trouble here.” MPD enters the bar and faces off with actual Dean. MPD tries to make everybody here equally miserable by saying that Dean doesn’t need or even like Sam and Castiel – they’re not his brothers, they’re his responsibilities. Sheesh, this seems to be MPD’s all-purpose brand of psychological attack. Castiel realizes that MPD isn’t necessarily expecting this to work, he’s just trying to stall until his monsters can get to the bunker.

Dean dares MPD to snap his fingers and nuke everybody. Well, MPD can’t actually do that, but he can fight, so he and Dean go at it.

In the bunker, one of the alternate-universe Hunters got turned in all the chaos, and lets the monsters into the building. Jack instinctively zaps the monsters, and hey, what do you know, Jack has his zap back.

MPD threatens to kill Dean if he’s forced out of the vessel. Dean has come up with an alternate plan. Instead of forcing MPD out, Dean locks MPD into a corner of his mind – in this case, a corner that looks just like the bar’s storeroom. “My mind, my rules,” Dean tells MPD. “I’m the cage.”

When Sam, Castiel and Dean return to the bunker from inside Dean’s head (isn’t it nice that SUPERNATURAL is a show where that sentence fragment makes sense?), Maggie reports to Sam that the monsters went their separate ways, and that Jack has his powers back.

Castiel immediately tells Jack not to use his powers, because this will burn his soul off. Jack assures Castiel it won’t happen again. (Yeah, right.)

Dean, within his mind, can hear Michael, still looking like Dean so we’ll continue to call him MPD, banging at the inside of the bar’s storeroom door. Then Billie/Death (Lisa Berry) appears to Dean. She was pretending to be the Reaper Violet. As is usual with Billie, she’s annoyed. Death has a library, with books for each person, depending on how their futures go. All of Dean’s books have been rewritten. In all of them except one, Dean dies because Michael escapes and destroys the world (and Dean with it, of course). Billie shows Dean the one book where something else happens. Dean reads it and is shocked.

“Nihilism” is SUPERNATURAL at its most trippy, although not at its funniest. Exploring Dean’s heart’s desire and what at least Michael perceives to be everyone’s main points of paranoid vulnerability allows a lot of food for thought, as well as dramatic opportunity. Also, it remains highly entertaining to see Ackles showing range as MPD, a character entirely different from Dean Winchester. Added bonus: “Nihilism” ends on a great cliffhanger, as we can’t wait to find out what’s in that book.