A surprisingly abrupt resolution to a most-of-season-long arc 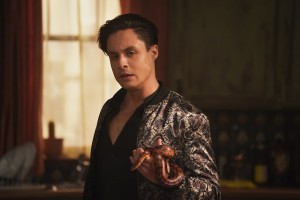 For all the buildup and angst the archangel Michael Possessing Dean (Jensen Ackles) arc has gotten, the SUPERNATURAL Season 14 episode truncates it in surprisingly sudden fashion. This of course makes us wonder what the real big endgame of the season will be.

We’re in New Mexico, with Noah Ophis (Philippe Bowgen), who seems to be a wealthy cannibal, a la Hannibal Lecter. Noah has a pet snake named Felix. When Noah eats one of his victim’s eyeballs, he gets snake eyes, which give him a vision. Noah “sees” Sam (Jared Padalecki) and Dean (Jensen Ackles) coming his way, so he leaves.

Sam and Dean show up, with Castiel (Misha Collins) and Jack (Alexander Calvert) in tow. They’ve been trying to catch up to Noah for weeks, and they’re mystified as to why his victims never show signs of struggle. Jack finds some shed snakeskin and coughs, but otherwise seems okay. When Dean suggests that witchcraft is involved, the boys’ witch associate Rowena (Ruth Connell) appears, offended that  they leap to conclusions about witches. (Oh, like you never killed anybody, Rowena …) Rowena, who tried and failed to heal Jack when he was dying, asks Sam how it is that Jack is alive. Sam is sort of evasive. She’s here because they asked her for a tracking spell to find Noah; the spell works, but not so far in a timely manner. Rowena notices that the victim has blackened lips.

Later, in a diner, Castiel asks Dean how he’s doing. Dean is of course having plenty of problems with archangel Michael trying to break out of Dean’s head and retake control. Dean doesn’t dare sleep because he’s afraid of what could happen. Castiel tries to reassure Dean that they’ll find a solution. Dean reminds Castiel that if Dean is unable to contain Michael, Castiel and Sam have promised to help Dean lock himself in the Malek box and dump it into the ocean.

Meanwhile, Jack actually isn’t all that well. In fact, he’s coughing up blood in the bathroom. He uses soul magic to heal himself, at the cost of further eroding his soul.

Rowena and Sam show up. Rowena has figured out that Noah is a Gorgon, who paralyzes his victims with his venom, and uses their eyeballs to see into the future.

Noah kisses a truck driver to paralyze him, then pulls out the guy’s eye and eats it to see what’s happening.

Dean and Cas investigate the trucker’s death. Noah has left a note for them, saying he sees Dean standing alone. Except Dean isn’t alone, he’s got Cas with him, so everybody theorizes that Noah can’t see angels. 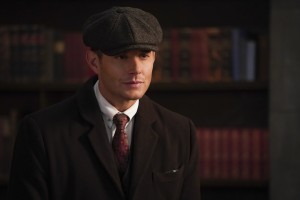 Sam and Rowena go to a vet’s office with a small dog they call Jack, and pretend to be a bickering couple. Once the dog is left alone for a moment in the vet’s office, he turns into actual Jack and steals some anti-venom. Returning to the exam room, the vet tries to figure out where the dog went. Hey, a vet losing track of a patient is no joke, but let’s hope since the “owners” have left, too, he thinks they took the dog home.

Rowena did a spell on Jack to turn him into a dog and back again, but says she felt another spell on Jack as well. Sam just says they’re all being careful. Rowena says that using dangerous magic used to be her habit. Now Sam and Dean are doing it.

Alternative-universe refugee Maggie (Katherine Evans) is holding down the fort at the bunker. She looks up Gorgons for the guys, and tells them decapitation is the only way of killing one.

Now that our team has acquired anti-venom for themselves and any new Gorgon victims, they’re ready to go into battle. Cas and  Jack rescue Noah’s latest intended victim and get the drop on the Gorgon. Noah tells them the story of the snake and the chicken, about a snake that keeps eating a chicken’s eggs, until the chicken sacrifices its last egg so that the snake will die when it eats this egg. He kisses them and they’re paralyzed. Sam and Dean come in – Noah knocks Dean out. Uh-oh. Jack recovers from his paralysis and decapitates Noah, so the Gorgon problem is solved.

But now Dean has a bloody forehead, and is out cold. Jack tries the anti-venom on Castiel, it doesn’t work, so Jack zaps him to health. Cas is worried about this, afraid about the cost to Jack’s soul. Sam can’t wake Dean up. They take Dean back to the bunker. Castiel tries to heal Dean, but can’t see what’s happening inside Dean’s head. Is Michael escaping? Jack offers to help, but Cas tells him no. Rowena eavesdrops and learns that Jack is burning off his soul whenever he uses his powers. She goes to read lore that may help.

Jack tells Castiel that he can’t bear the thought of losing Sam and Dean. Cas reminds Jack that, unlike the two of them (angels), Sam and Dean are mortal and says that Jack should appreciate the time they all have together. Jack really wants to use his powers to help Dean, but Castiel wants Jack to preserve his soul. Jack has also kept Noah’s snake, Felix. Castiel interprets Noah’s story for Jack, saying that it’s about giving up something you love to kill something you hate. Yeah, that’s the kind of story somebody like Noah would tell.

Yay, Michael is at last gone from Dean’s head – and, oh no, has gotten into Rowena. Michael/Rowena kills Maggie and other alt-u refugees in the bunker at the time.

But unlike a demon, an angel can’t possess somebody without their consent. So why did Rowena say yes to Michael invading her head? Well, Michael threatened to kill everybody she cared about. Of course, he didn’t plan to keep his word. Michael/Rowena makes Sam and Dean unable to breathe, and blind.

Jack zaps Michael/Rowena, which frees the others. Michael/Rowena tries zapping Jack, which doesn’t have effect. Jack says he’s the son of Lucifer, a Hunter, a Winchester, and gets Michael out of Rowena. He also seems to have gotten some of Michael’s grace. He announces Michael is dead. Rowena is now Michael-less and okay. Jack now has yellow glowing eyes and wing shadows. He probably doesn’t have a soul anymore.

While it’s possible Michael may resurface, it seems like Jack may have finally zapped him for good. Which would be good, except that a soulless Nephelim seems like he could be problematic, both for himself and for everyone around him. This remains to be seen.

“Ouroboros” is a fairly solid episode, and it’s certainly eventful, with a lot of snappy dialogue, plus some interesting philosophical perspectives (Castiel’s take on friendship with humans, the Gorgon’s explanation of why he mainly feeds on men these days). We’re sad about Maggie and the alt-u refugees – it was nice for Sam to get to lead a group, and they were a helpful bunch. Then again, we’re happy for Sam and Castiel that they can stop worrying that Dean is going to make them dump him into the ocean, though that dilemma went away pretty abruptly, too. And why didn’t any of Death’s books mention that Dean might get rescued? Is any of this going to come up again, or are we hurtling on to the next big arc?