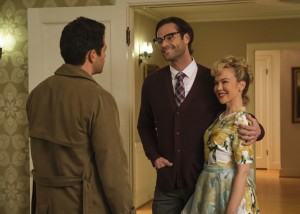 In Arkansas, Conrad Martin (Camden Filtness), dressed in ‘50s Americana garb, runs frantically to Harrington’s, a ‘50s-style soda fountain shop. Conrad begs his girlfriend Sunny (Caitlin Ashley-Thompson) to run away with him. She says she can’t, so he keeps running, goes into a conventional (i.e., modern) convenience store, and grabs the clerk’s phone. Then Conrad’s head explodes (we get a SCANNERS reference later).

Back at the bunker, Jack (Alexander Calvert) has his Nephilim power back, courtesy of having killed archangel Michael and ingested his grace. Castiel (Misha Collins) is trying to ascertain how much of Jack’s soul got burned up when Jack killed Michael. Jack says he doesn’t know, and that he feels different than he did the last time he had his powers. This worries Castiel. Jack has also kept Noah’s pet snake Felix, which doesn’t seem to be hungry. It’s suggested that perhaps the snake misses its former owner.

Dean (Jensen Ackles) is happy to have Michael out of his head and out of the world. Rowena has checked in (offscreen) and said she’s okay after having been briefly possessed by Michael and used to murder a lot of people. Dean is worried about Sam (Jared Padalecki), who is anguished about all of the alternative-universe Hunters, including Maggie, who were killed by Michael/Rowena before Jack was able to take him down. On the other hand, Dean – surprisingly for him – actually wants to sleep until the cows come home. When Sam wants to investigate Conrad’s exploding head in Arkansas, Dean is so tired that Castiel offers to go in Dean’s stead. Castiel tells Dean to try to get Jack to open up to him. After all, Dean has experience in dealing with a soulless loved one (Sam, back in Season 6).

In Arkansas, the convenience store clerk (Daniel Kai Lin) directs Sam and Cas to Charming Acres, which seems to exist in a strange ‘50s-esque reality. A couple of residents, Cindy (Kimberley Shoniker) and Justin Smith (Guy Christie) don’t even recognize a cell phone for what it is, though it sticks in Justin’s mind.

Sam and Cas stop at Harrington’s and are given complimentary milkshakes. They drink these. Uh-oh. The mayor and fountain shop owner, Chip Harrington (Bill Dow), directs the “FBI agents” to the boarding house where Conrad had been staying.

Boarding house proprietor Mrs. Dowling (Gigi Jackman) is happy to let our guys poke around. Cas thinks the whole town is odd; Sam thinks it’s “nice” and is a little too enthusiastic that Mrs. Dowling is making pot roast. At this point, it seems like the milkshakes may have been spiked. 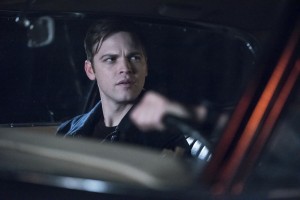 Elsewhere in town, Justin Smith finally remembers what cell phones are, that he used to have one, that he has a daughter, and that he doesn’t know who Cindy is. He runs out of their house screaming for help, and then his head explodes.

The next morning, Castiel awakens to find that Sam has already left the boarding house. Cas goes to Harrington’s, where Sunny tells him that Sam stopped by and went to the Smith house. Sunny also tells Cas about poor Mr. Smith.

Cas arrives at the Smith house to find that Cindy is sure her husband is alive and well. This would be Sam, who now thinks he is Justin Smith, perfect ‘50s husband. Padalecki, while the perfect Sam Winchester, doesn’t strike quite the right glossy, hearty, prudish notes as Justin; he has a contemporary, easygoing quality that shines through. Sam/Justin is bemused by Castiel’s insistence that Sam isn’t Justin. However, Sam/Justin’s tolerance ends when Cas utters the intolerably offensive swear word “hell.” Sam ejects Castiel from the house for saying “H-E-Double-Hockey-Sticks.”

Castiel, trying to figure out what hockey sticks have to do with anything, doubles back to Harrington’s. He accuses Sunny of being a witch. She denies it. It’s actually her dad Chip who is out of control. Chip shows up with a small mob that includes Sam/Justin.

Chip explains that, when his town fell into decline, he discovered he has the ability to influence other people’s minds. He’s unable to do this with daughter Sunny, though – she’s too much like him. Sunny yells she’s nothing like Chip. Chip wonders why he can’t influence Castiel. Castiel explains he’s not human.

Chip accepts this, then sics his mob on Cas. Castiel easily deals with a few of them, but doesn’t want to hurt Sam. Castiel tells Sam that he knows what it’s like to lose an army, to feel like a failure as a leader. If Sam gives in to this sense of failure, he’s failing Jack, he’s failing Dean. Sam snaps out of it.

Although Chip can’t influence Castiel’s mind, the man can still telekinetically toss the angel around. Chip can also make Sam’s head explode. We see the beginning signs of this. Sunny puts a stop to it by using her own power, first to knock Chip around, then to tell him if he wants to be happy, he should be happy.

Chip looks like he’s suffered a stroke. Castiel peers into Chip’s mind and sees that he’s trapped in a fantasy world where he actually is happy and can’t hurt any real people.

Dean, meanwhile, takes Jack and his new pet snake on a road trip to see newly-recuperated Prophet of the Lord Donatello (Keith Szarabajka). Donatello seems pretty jolly, although he’s been soulless since God’s sister Amara took his soul a few seasons back. Dean stays by the car with the snake while Donatello has a chat with Jack, which Dean hopes will allow Donatello to determine whether any of Jack’s soul is left.

Donatello tells Jack that being soulless makes him feel like a galaxy, bright and shiny, but with a big black unfeeling hole at the center. Jack says he doesn’t feel nothing, but he does feel different than before, and he’s tired of Dean and Sam and Castiel worrying about him all the time. Donatello points out that they’re his family, and families worry. Donatello says that when he’s not sure what to do, he ask himself what Mr. Rogers would do. Since Jack isn’t familiar with Mr. Rogers, Donatello explains that Mr. Rogers is the best man he knows. Jack says that Sam and Dean are the best men he knows, so Donatello suggests that Jack ask himself what would the Winchesters do? Donatello says to Dean that he doesn’t think Jack is soulless, but Jack is perhaps the most powerful being in the universe (Chuck and Amara don’t count, since they may be in some other universe), so it’s a good idea to keep an eye on him.

Back at the bunker, Dean and Jack arrive a little before Sam and Castiel return. Sam is slightly annoyed that Cas told Dean about Sam’s wardrobe as “Justin.” (Dean to Sam: “I hear you wore a cardigan.”) Castiel goes to check on Jack. Dean tells Sam that Castiel also said that Sam was happy. Sam agrees that he was happy, but it wasn’t real. He needs some time to recover from the loss of their alternate-universe friends.

In Jack’s room, Jack tells the snake that Sam and Dean would do what it took to make the snake happy. Maybe the snake does miss its former owner, so Jack will get the snake back together with him – in Heaven. Jack turns the snake to ash. He doesn’t notice Castiel seeing all this in the doorway.

“Peace of Mind” is essentially SUPERNATURAL going briefly to PLEASANTVILLE. It’s agreeable, it makes sense to give Sam an emotional break, and it’s great fun to see Szarabajka back in full jovial form.

As for Jack seeming to take on Michael’s philosophy of destruction as improvement, that’s a logical plot turn. Obviously, something had to happen after Jack ingested all of Michael’s grace.

But oh, boy, about the snake: first of all, the snake’s owner was an evil demigod. There is no reason to believe he went to Heaven. If Jack were dealing in metaphors, we’d understand, but he’s being literal. In SUPERNATURAL, do all snakes go to Heaven? Let’s hope so.

Second and more important, we get that the SUPERNATURAL makers want us to be able to see the snake, and that it needs to be portable, but seriously, keeping the poor thing in a glass container with nothing in it and no room for it to stretch out, and for that matter, no air holes? Never mind that the snake is not hungry (a source of concern for Jack), it’s a wonder it’s alive at all. Anybody who would keep an animal in such conditions is arguably soulless, well before Jack’s pretzel logic leads him to destroy the snake. This is probably not the point the show is trying to make, but it sets a really bad example. (We know that Dean is preoccupied, and scared of snakes, but it doesn’t speak well of him either that he allows the situation to go on as long as it does.) Yeah, it’s a snake and not a puppy, but it’s an animal in captivity, and it deserves decent treatment. “Peace of Mind” loses a point for this.