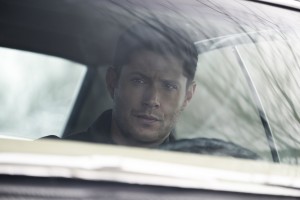 Dean (Jensen Ackles) is experiencing intense frustration trying to play Mousetrap (youngsters, that’s a 3D board game). Jack (Alexander Calvert) is in the kitchen making popcorn, where Mary (Samantha Smith) tries to get him to open up about how he’s feeling, now that he’s killed archangel Michael and absorbed Michael’s grace. Jack snaps at her, then goes back to being super-nice. Sam (Jared Padalecki) is out on a pizza run. This is all in preparation for game night.

Soulless but still cheerful Prophet of the Lord Donatello (Keith Szarabajka) is about to bake cookies when he answers a knock at the door, is overpowered, tied to his dining room table and injected with something. Dean receives a frantic call for help, followed by Donatello chanting something.

Dean and Mary leave to try to rescue Donatello. When Sam gets back to the bunker, Jack plays him the recording of the call. The chanting is in ancient Hebrew, a warning about the Devil walking the Earth. And when Dean and Mary arrive at Donatello’s house, they are greeted by Nick (Mark Pellegrino), Lucifer’s former vessel. Nick says that he’s given Donatello a slow-acting poison, but he wants to talk. If he can have his talk, Nick will reveal Donatello’s whereabouts in time for an antidote to be given.

Castiel, meanwhile, meets up with angel-turned-mercenary-faith healer Anael (Danneel Ackles). Anael used to be the right hand of Joshua, the only angel who got communications from God while God was “away.” Castiel wants Anael to contact God. Only God can restore a soul, and Castiel is worried that too much of Jack’s soul may have burned away as the result of him using his powers. Since Castiel has offered her a bribe in the form of valuable ancient earrings, Anael agrees to take him to someone who may be able to help.

This not-so-helpful helper is Methuselah (Nathan Kay), who owns a used objects emporium. Whatever Joshua used to contact God is in here somewhere. Castiel manages to find the object, but gets no response. Anael confronts Cas and says he’s so desperate he’d rather try to contact God than tell Sam and Dean the truth, which is that Jack’s soul is gone.

Dean and Mary bring Nick back to the bunker. Sam is so angry he’s ready to beat Nick to death. This is because Sam blames himself for letting Nick get loose in the first place. Mary tells Sam he’s not responsible for what Nick did, and that giving Nick a chance shows that Sam is a good man.

Nick says he wants to talk to “his son.” This worries everybody, but Jack agrees to sit down with him. Nick tells Jack that Lucifer really loved him. Jack gets so angry that he head-butts Nick, which causes both of them to bleed. Jack cleans himself up, but doesn’t clean up Nick. (This turns out to be important.) 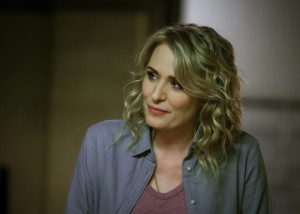 Dean and Sam drive, with Nick handcuffed in the back seat, to the abandoned warehouse where Nick has stashed Donatello.

At the bunker, Jack finds the needle that Nick used on Donatello and realizes it contained grace, not poison. A quick phone call to Sam has Sam asking Nick what the heck is going on here. Nick confesses that he got Donatello (Prophet of the Lord and all) to find Lucifer, who is awake in the Empty. Nick, as we know, just wants Lucifer back home in Nick’s body again. Talk about unhealthy co-dependence. Nick goaded Jack so that they’d tussle and Nick could get some of Jack’s blood, the secret ingredient to get Lucifer back.

Nick fights with Sam and Dean, along with some demons who arrive to assist in bringing back the big boss. The hench-demons are easily dispatched. Donatello is okay, but Nick beats Sam over the head with a rock. Sam is in such bad shape that Dean calls an ambulance.

Jack senses something wrong and zaps himself over to the warehouse just in time to prevent Lucifer’s emergence from the Big Empty. Severely angry at Nick’s tricks (hey, a guy’s got to be able to stop confronting his dad at some point, and Jack has had it with dealing with Lucifer), Jack then mutilates and burns the man. We understand the Nephilim has a righteous grievance, but what he does seems a little extreme – soulless, even.

Then Jack goes outside and uses his power to heal the possibly dying Sam. He then zaps himself back to Mary, who sees Nick’s corpse and is shocked by what Jack did. Killing an enemy is one thing, but torture for the sake of vengeance? Jack wants Mary to promise not to deal Sam and Dean. (Yeah, sure, buddy.) He then stalks outside. Mary follows. She’s trying to get him to talk about his feelings, he keeps telling her to be quiet, Mary is just trying to be a good mom, and then Jack yells, “Be quiet!” And wow, there is absolute quiet, like nobody else is there. In the silence, Jack asks, “Mary?”

Oh, no. Did Jack just do what he appears to have done? Did we lose the one semi-regular female character currently on SUPERNATURAL? (Rowena isn’t on enough to count.) Is there going to be a colossal rupture going into the end of Season 14? Based on the fact that Michael and Lucifer both seem to be out of the picture, for anything propulsive to happen, the answer seems like it must be yes. It’s also a little disappointing that Mary apparently dies doing something that is clearly intrusive, even if she weren’t dealing with a super-powered and possibly soulless individual. There’s a point where it seems like common sense and sensitivity should have kicked in, to say nothing of self-preservation. “Game Night” moves right along, and it’s a good driver of plot, but it doesn’t have too many stand-out individual moments.