©2019 The CW Network, LLC/Dean Buscher
Jared Padalecki as Sam and Jensen Ackles as Dean in SUPERNATURAL - Season 14 - "Don't Go in the Woods"
Reviews 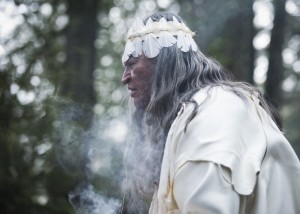 Sam (Jared Padalecki) decides this is a case worth checking out. Dean (Jensen Ackles) doesn’t want Jack (Alexander Calvert) to come – he’s worried that Jack may accidentally zap someone now that he’s got his powers back and gives a phony reason why Jack should stay behind. Jack has a good idea of Dean’s actual concerns, but with apparent good cheer agrees to watch the phones and go shopping while the Winchesters are away.

Jack runs into three of the car-and-magic-items-stealing teens from “Lebanon”: Max (Skylar Radzion), Stacy (Zenia Marshall), and Eliot (Cory Gruter-Andrew). They are interested in Jack because they know he lives with the monster-fighting Winchesters.

The kids invite Jack to hang out with them while they study for their SATs. Eliot is wowed by Jack’s knowledge of monster lore; Stacy and Max are amused by Jack’s “home-schooled” innocence. Jack begins showing them some telekinetic tricks with an angel blade. The kids are at first impressed, then alarmed when the blade starts coming too close. Then Stacy tries to flinch away and gets stabbed. Jack heals her, but the damage is done – he’s scared away his potential new friends.

The monster in the woods claims another victim. Sam and Dean are by now in the vicinity. Sam’s research shows they are dealing with a Koshuga, a creature so hungry that it drips stomach acid.

In the woods, the guys encounter Sheriff Mason. After everybody finishes getting the drop on everybody else and ruffled feathers are soothed, Mason, who is Native American, turns out to know quite a bit about the Koshuga, although until recently, he thought it was a myth. 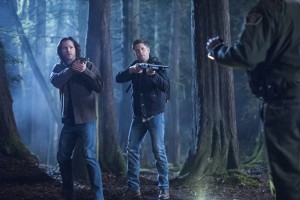 Jared Padalecki as Sam and Jensen Ackles as Dean in SUPERNATURAL – Season 14 – “Don’t Go in the Woods”| ©2019 The CW Network, LLC/Dean Buscher

The Koshuga was once Henry, the eldest son of a family of white settlers who moved into a cabin in the area several centuries ago. During a hard winter, Henry cannibalized his family, then moved on to attacking members of the local tribe. When the tribe caught Henry, they cursed him to be a creature that would always be so hungry that when he could not catch food, his body would consume itself. They confined him to the local woods, now part of the national park.

Mason is trying to keep people out of the woods, but that’s obviously not going too well. He knows that the Koshuga can be killed by a silver blade through the heart. There’s a fight, but the Winchesters and Mason prevail. Once dead, the Koshuga melts. Dean is happy to have a RAIDERS OF THE LOST ARK moment.

Sam and Dean feel guilty about having kept Jack out of the Hunt. Back at the bunker, they admit to Jack that they were afraid he might use his powers and cause damage. Jack doesn’t mention the snafu with the local teens, and promises not to use his powers without permission. We’ll see how long this lasts.

Given all of the tension of Michael and the Malek box and the murdered alternate-universe Hunters and so on, it seems rhythmically time to have an episode where Sam and Dean get to just take out a monster. As monsters go, the Koshuga is fairly cool. As for Jack’s misadventure, this may not point to soullessness – it’s the amped-up version of accidents that happen when youngsters try too hard to impress each other. “Don’t Go in the Woods” is a good stepping-stone in that plotline, and a decent standalone in other respects.