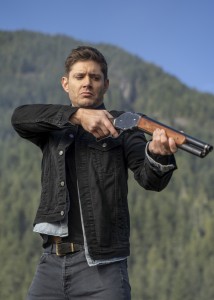 Sam (Jared Padalecki) and Eileen (Shoshannah Stern) wake up handcuffed to chairs in the now-empty casino where Chuck/God (Rob Benedict) has been holed up. Chuck explains that he’s been nudging Eileen towards Sam the whole time, including Sam finding the spell that resurrected her (though Chuck acknowledges Sam completed it on his own). Chuck needed someone who he could use to spy on the Winchesters – he missed his favorite show. Eileen did not realize until now she was being used in this way. And Chuck confirms Sam’s theory that the bullet has linked Chuck and Sam.

Back at the bunker, Dean (Jensen Ackles) and Castiel (Misha Collins) are getting worried that they can’t reach Sam or Eileen by phone. Chuck answers Eileen’s phone, confirming the worst. Dean immediately wants to go after Sam. Castiel points out that Chuck/God isn’t going to kill Sam, because that’s not the ending he wants. Dean says Chuck can still torture him. Castiel says Dean is being stupid (well, all right, Castiel). If they go after Chuck right now, they are empty-handed. If they go to Purgatory and get the Leviathan blossom for the taking-down-God spell, they have a chance at saving Sam and then the world.

Chuck wants to cut the bullet out of Sam – Chuck thinks this will unlink them – but he physically just can’t. Evidently, Chuck can watch but can’t do. So he takes control of Eileen’s body – though she’s still conscious in there – and makes her try to do it. This is extremely physically painful to Sam. The cutting doesn’t work, and Sam starts to bleed out. When it’s clear this won’t work, Chuck heals Sam. Chuck realizes that Sam still has hope. Hmm …

In Purgatory, Dean and Castiel have twelve hours before the rift that Michael opened closes behind them. They go looking for the Leviathan blossom, hindered by the fact that they don’t know what it looks like. Castiel wisely quashes Dean’s notion that they split up (is Dean possessed by a bad-idea demon?). They get attacked by a Leviathan. They easily subdue him and, threatened with death, the Leviathan leads them to some Leviathan blossoms. The blossoms only bloom in the rotting corpses of Leviathans (the requirement that the body have rotted for several months is why Dean doesn’t just shoot the Leviathan they’ve got). Dean asks about his old vamp friend Benny. The Leviathan says everybody heard of Benny – the guy who escaped Purgatory and then returned – but he’s dead, killed by his own kind. Dean is saddened.

Chuck tells Sam that if Sam stands firm, and Dean and Castiel hold up their end, our guys actually could win. But, Chuck continues, Sam doesn’t really want to win – not if he knew what winning would look like. Chuck claps his hands. Suddenly, it’s April 17, 2020. Sam is in the bunker with Eileen, who is looking up normal-cause deaths on the Internet. Dean is snoozing in a chair. Castiel enters. Everybody has a beer. Then Sheriff Jody (Kim Rhodes) calls. She and Claire tried to take out a vamp nest. Claire is dead.

Sam wakes up back in the casino. Chuck says that Claire’s death is just the beginning. He shows Sam his magic watch. Set it to any date/time and it will show you what happens. Sam says it won’t change his mind. Chuck still holds out the watch. 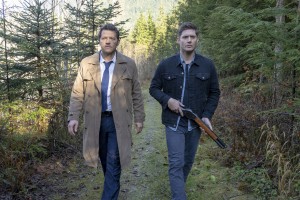 Misha Collins as Castiel and Jensen Ackles as Dean in SUPERNATURAL – Season 15 – “The Trap” | ©2020 The CW Network, LLC. All Rights Reserved/Colin Bentley

In Purgatory, Castiel offers his condolences about Benny. Dean says he owes Benny his life. Castiel says this place brings out guilt in people. Dean says he knows Castiel is sorry about Mom. Castiel says he’s guilty about Jack. They spat over Dean not hearing Castiel’s apology, Castiel leaving, Dean not stopping Castiel from leaving. It feels like a good comic moment has been missed when the Leviathan doesn’t weigh in on the whaat? of it all.

Sam, having succumbed to temptation, has forwarded to a conversation he and Dean are having in the Impala. They hesitated to take on a bunch of werewolves, and now four people are dead. If Castiel were still here, he could have healed them, but he’s not, and the monsters are winning.

The Leviathan leads Dean and Castiel to the Leviathan blossoms, but they’re right in the middle of an angel trap. The Leviathans want to punish Castiel and Dean for injuring their mother, Eve. More Leviathans appear and one knocks Dean unconscious. When Dean wakes up, he’s alone in the angel trap.

Sam sees himself and Dean in the future. Dean has developed a sense of futility and says it’s time to stand down. They’ve lost pretty much everyone they cared about. Castiel somehow acquired the Mark of Cain, went crazy, and Dean had to bury him in a Malek box. The monsters are everywhere. Bobby has a death wish, so does Jody after what happened to Donna and the girls, and after what happened to Eileen, Dean continues, so does Sam. Dean feels they’ve just lost, and he’s done.

Sam real-time says this is a lie, and he knows what Chuck is doing. Chuck maintains that he’s just the messenger. Sam insists that the Dean he knows would never give up.

Oh, come on. The watch might as well have rewound to all the times Dean did give up, or, for that matter, Sam called it quits. The thing is, they eventually came around. SUPERNATURAL doesn’t need to play upon anybody’s forgetfulness this late in the game.

Meanwhile, Dean is searching Purgatory for Castiel, but running out of time before the rift closes and he’s stuck there. Dean hopes that Castiel can hear him. Dean says he should have stopped Cass from leaving, but Dean just let him go because it was easer than admitting he was wrong. Dean starts to cry. He doesn’t know why he gets so angry, but it’s always been there, and it comes out when things go bad. Dean forgives Castiel, and he’s sorry it took him so long.

Another vision from God’s watch: November 3, 2021. Sam declares that he’s going off to raid a nest, with or without Dean. Dean says he doesn’t have a choice. Sam tries to wind the watch forward. It goes to Dec. 9 and no further. Chuck says this must be because that’s the end of the line.

In Purgatory, Dean finds Castiel, a little bloodied but otherwise apparently okay. Castiel says he let the Leviathans take him so Dean could escape. Once Castiel saw a Leviathan blossom, he grabbed it and fought with the Leviathans, but they’re still hunting him. Dean wants to say something to Cass, but Castiel says he already knows – he heard Dean’s prayer.

Watch vision, December 9. Dean at least has recovered enough heart to want to go out Butch and Sundance style. However, they are confronted by Bobby (Jim Beaver) and Jody. Sam and Dean are now vamps. Oops. Bobby shoots Sam. Dean tears Jody’s throat, and is then staked by Bobby.

Sam in the present is horrified. Chuck asks if this is really what Sam wants. (Well, it’s better than the world ending, right?) Chuck says he’s sorry, that Sam and Dean deserve a better ending. Despite their recent problems with one another, Chuck says that Sam and Dean matter to him. He wants better for both of them. Sam says he’s seen the endings Chuck wants – Sam and Dean killing each other – and that doesn’t look any better to him. Chuck questions this.

Back at the bunker, Dean and Castiel do the ritual. Castiel has to take the Mark of Cain (Dean did it before and can’t do it again.) They get the taking-down-God spell into a tidy orb, about the size of a baseball.

Sam insists that when he and Dean win, Sam will make it better. Chuck says that Sam doesn’t know. Without God, darkness rises, monsters prevail, and everyone will die. Can Sam live with that?

Dean and Castiel get to the casino. Dean unties Sam. Eileen under Chuck’s control, stabs Sam, albeit non-fatally. Castiel grabs Eileen. Dean punches Chuck; Chuck punches Dean back. Dean tosses the orb to Sam … who just can’t bring himself to detonate it. Sam drops the orb. It rolls to Chuck.

Dean is incredulous. And both Chuck and Sam now seem to be free of the shoulder wound that connects them. Dean demands to know what Chuck did to Sam. Chuck says he got Sam to give up hope. Then Chuck squishes the orb.

What now? Dean says Chuck won’t just dust them – it would mess with his big finish. Chuck has news. All the Sam-and-Dean-killing-each-other visions weren’t versions of his upcoming stories, they were Chuck’s memories of other Sams and Deans on other worlds. Just like this Sam and Dean, they didn’t think they’d do it either, but they did. Dean says this Sam and Dean won’t do it, so Chuck should go back to another Earth. Chuck says we’ll see.

Back at the bunker, Eileen is leaving. She doesn’t know what’s real anymore. Sam kisses her, romantically, and says he knows that was real. Eileen looks at him lovingly, but still leaves.

Sam goes to join Dean and Castiel in the meeting room. Sam says he believes that what Chuck showed him was real. Dean says that’s good enough for him. So what do they do? If they can’t kill him or trap him … Dean says they’ll find another way.

The whole premise of “The Trap” is entirely worthy, an attempt to trap Chuck that doesn’t work because removing God from Earth won’t work. Makes sense. It’s great for Dean and Castiel to finally make up for something that really wasn’t Castiel’s fault in the first place. Dean’s speech is a bonus. While it would suck massively for Sam and Dean to wind up as vamps killed by Bobby and Jody, seeing them as vamps in the not-going-to-happen future is also fun.

On the debit side, while we don’t need to see Castiel punching out a bunch of Leviathans, his reunion with Dean is so convenient that it feels like a trap – for awhile, we’re waiting for this to play into the title. It’s also too bad to lose Eileen, albeit perhaps not forever, since she’s a good character and has nice chemistry with Sam. And if Benny is actually gone, having him dispatched offscreen is a bit perfunctory, especially since the character and actor showed up earlier this season. Oh, well, maybe that’s a fakeout.

On the whole, though, “The Trap” works well, rolling the plot forward, showing us directions where things can’t go so we have a better grasp on where it’s all going.