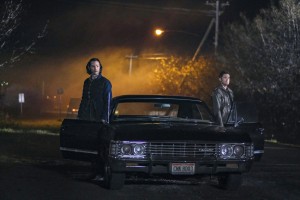 Jared Padalecki as Sam and Jensen Ackles as Dean in SUPERNATURAL – Season 15 – “The Heroes’ Journey” | ©2020 The CW Network, LLC. All Rights Reserved/Bettina Strauss

This never happened to Jack Bauer. “The Heroes’ Journey” is a moderately meta episode of SUPERNATURAL that is hilarious simply by finally acknowledging what has never been explicitly stated before: what we except as ordinary in Sam (Jared Padalecki) and Dean (Jensen Ackles) – their stamina, their ability to land punches, their health, even the fact that they never have car trouble – isn’t actually ordinary at all. The Winchesters are forced to confront an enemy they’ve never known before: mundanity. Bonus points for bringing back the winsome werewolf ally Garth (DJ Qualls), and making him the true hero of the episode.

Cage fight between a man (Jesse Hutch) and a woman, with a mixed audience of werewolves and other monsters. She’s winning, he semi-wolfs out and claws her, she pulls a blade and stabs multiple times.

Dean is in Berens’ Quick Trip (presumably named for writer/producer Rober Berens), trying to buy beer and snacks, but the credit card that’s supposed to always work (Charlie hacked it for them) is declined. Dean also has a toothache and finds a parking ticket on his – granted, illegally parked – car.

Back at the bunker, Sam is accidentally burning dinner, breaking dishes, tripping over his feet and coming down with a cold. Dean thinks they’re cursed; Sam insists they’re just having a bad day. Castiel is up in Heaven, trying to gather intel (as we hear in the exposition).

The Winchester get a call from Garth, who needs their help. The boys drive to Garth’s home. Baby’s engine dies on a dark, deserted road. They have to walk the rest of the way. 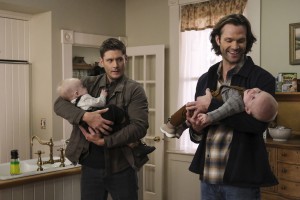 Jensen Ackles as Dean and Jared Padalecki as Sam in SUPERNATURAL – Season 15 – “The Heroes’ Journey” | ©2020 The CW Network, LLC. All Rights Reserved/Bettina Strauss

We see that Garth and his wife Bess (Sarah Smyth) are now the proud parents of a little girl, Gertie (Emma Oliver) and two twin baby boys (Austin and William Brody). Garth introduces Sam and Dean to the children. The twins are little Sam – named after Sam – and little Castiel. Dean is nonplused.

Bess’s cousin Brad – the werewolf we saw getting knifed – is unconscious in an upstairs bedroom. The cops found him outside St. Cloud, Minnesota. He’d been left for dead. Bess says the stab wounds actually come from a wraith, but why would a wraith go after a wolf?

Dean compliments Garth on the house. Garth notices Dean’s teeth hurt, offers to help. Turns out Garth is a licensed dentist with a lucrative practice, serving the local werewolf population (too hard to explain all that raw cow meat between the teeth to human doctors). Dean has never seen a dentist and has seventeen cavities. Garth puts Dean under so he can give him fillings.

Meanwhile, Bess offers to help Sam with his cold. She gives him a secret family cold recipe, which is mostly cayenne pepper. As Gertie cheerfully observes, “Mommy, the giant’s crying.”

And then – okay, this justifies life, the universe and everything – Dean dreams/hallucinates that he and Garth are in black-and-white, wearing white tuxedos, tap-dancing to “Let’s Misbehave.” Garth scampers off, leaving Dean hoofing with a lamp, a la Fred Astaire or Gene Kelly. If we’re going to go on a trip, this is a most excellent one.

Once Dean has come out of sedation and Sam is feeling better, Garth asks them what’s going on. Weird stuff is clearly happening to them – who did they piss off? Sam and Dean explain to Garth and Bess about the whole business with God. Garth asks if he’s a guest star in their story, and quickly adds that he hopes he is. Sam and Dean will probably win in the end, but meanwhile, if they’re the heroes, everything is awful. Garth then origin stories for Batman, Superman, and FIFTY SHADES OF GREY: dead parents, blown-up planet, something about an unpleasant business in a hardware story (that last is from FIFTY SHADES – don’t ask this reviewer, who has never seen it). Then again, heroes usually don’t get mundane problems like dental cavities, colds, and engine problems. Maybe, Garth suggests, God has downgraded the guys from heroes to “normal.” Sam asks how they fix it, and Garth says he doesn’t know.

The conversation is interrupted by Brad waking up. After a little hands-on persuasion from Bess, Brad ‘fesses up and tells them about the monster fight club in Minnesota. Garth worries that the boys, currently being non-heroic and “normal,” may not be up to it. Dean insists it’s their job. Garth wants to come with them. Sam and Dean convince him that, with a wife and three kids, Garth needs to stay at home. 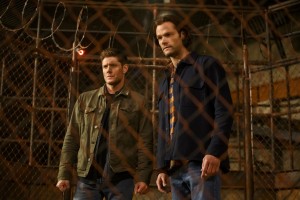 Jensen Ackles as Dean and Jared Padalecki as Sam in SUPERNATURAL – Season 15 – “The Heroes’ Journey” | ©2020 The CW Network, LLC. All Rights Reserved/Diyah Pera

Dean and Sam arrive at the isolated, apparently abandoned-in-daylight fight club. They arm themselves to the teeth. Dean has indigestion from eating too many cheese sandwiches. Sam theorizes that Dean may now be lactose intolerant, while Dean runs to the bathroom to be sick. A human-looking monster, Cutty (Dean Dworkis), shows up with a gun while Dean is still on his knees throwing up in the stall.

Sam and Dean are locked in the ring. Cutty, a shifter, introduces himself as the proprietor. He wants the Winchesters to fight in the ring as a team, not knowing the boys aren’t at their best. Cutty introduces them to their opponent, the vamp Maul (Daryl Ducharme), then locks the boys in a cell together.

We then get the Internet ad for the match. It’s super. During the warm-up round, Sam and Dean try to pick the lock. Dean breaks a nail and they just can’t get the hang of it. Were their lock-picking skills all Chuck? Is Chuck really going to let them die like this? Well, he might. Or, Sam muses pessimistically, just let them get paralyzed.

Dean gives his brother (and himself) a pep talk. They can do this. Although Dean doesn’t look so confident. But then, when Cutty comes to bring them to the arena, their cell is empty and the doors are open. Maybe things are looking up.

We get a very slight flashback, showing us Garth as he sneaks in and pulls the locks off the cage. Garth has also planted C4 charges, and blows up the building once they’re all safely in the parking lot. Amazingly, Maul escapes the blast, and knocks down Garth with one punch. He then fights the Winchesters, who are not up to it. Maul, it must be said, is very sportsmanlike, even letting Dean tap out to prolong the fight. Fortunately, Garth is there with a blade to finish the fight. Dean, having been kicked in a delicate area, complains (in an uncommonly boyish voice) of feeling like his stomach is now up in his ribcage.

Back at Garth’s home, Dean and Sam cuddle the twins until baby Castiel’s eyes start glowing yellow, signifying that the kid is feeling a little wolfy. The guys hand the tots back to their mommy. Sam and Dean both thank Garth for saving them, and killing a bunch of monsters. He’s a hero. Garth wonders if they’ll be okay, what with being normal and having God after them. Sam says he honestly doesn’t know. Garth says he’s heard a rumor about a place in Alaska where people can go if their luck has turned bad. Then the guys hug Garth.

Garth goes inside and, as Warren Zevon’s “Werewolves of London” plays on the soundtrack, he dances with his wife. The guys watch through the window. Then they head out on the road. Dean observes that being normal works fine for normal people, but nothing about their lives is normal. He muses that if things stay the way they are now, he and Sam may fulfill Chuck’s plan for them by killing each other accidentally. So Dean and Sam are off to Alaska – assuming that Baby, lurching out of Garth’s driveway, can get them there.

“The Heroes’ Journey” is flat-out fun. We get this season’s concerns about destiny vs. free will, but the guys are too busy trying to cope with regular-people problems to get too blue about it. We get Garth. We get freakin’ “Werewolves of London.” We get Dean tap-dancing. Maybe it’s not all we can ask out of mortal existence, but it’s plenty to receive from an episode of SUPERNATURAL.