Enjoyable, but not a standout, although Eileen’s return is welcome 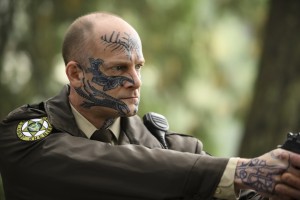 With Rowena dead and gone, a young witch (Alex Sturman) – we’ll find out her name is Jacinda – breaks into Rowena’s home, hoping to steal spells. However, Jacinda is only there briefly before she hemorrhages to death.

Back at the bunker, Sam (Jared Padalecki) is doing research, trying to find God and/or Lilith. Dean (Jensen Ackles) is binging on breakfast cereal and SCOOBY-DOO.

Out on a run, Sam encounters the ghost of their friend Eileen Leahy (Shoshannah Stern). Eileen was killed by a hellhound sicced on her by now-also-dead Ketch, back when he was trying to exterminate everyone who associated with the Winchesters. Eileen escaped from Hell when God opened the gates, and fled before she could get sucked back down. Unfortunately, even though Eileen is completely innocent of wrongdoing, a soul that has been in Hell cannot go to Heaven. Eileen knows she can’t stay on Earth as a ghost – ghosts go crazy and start hurting people – but refuses to go back to Hell.

Dean comes up with the idea of building Eileen her own soul-catcher where she can exist. It’s not perfect, but it will keep her from being sucked back down into Hell. However, Sam doesn’t know how to do the soul-catcher-making spell without Rowena. Dean is sure Sam, who was working with Rowena, can figure it out. Dean also doesn’t want to come along to help Sam get crystals from Rowena’s home. Sam accuses Dean of giving up after God came back, like there’s nothing they can do. Helping Eileen is something they can do. Dean is sure Sam can do it on his own just fine. At this juncture, how Dean can think anything in their world is going to be simple and not require backup is a mystery more profound than anything the boys normally investigate, but never mind.

Castiel (Misha Collins), meanwhile, has been holed up in a fishing cabin in a small town. A dead boy, his body drained of blood, has been found in the river. Castiel pretends to be an FBI agent in order to try to catch the killer. Melly Krokowski (Jennifer Spence), the mother of another missing boy, asks for Cass’s help in finding her son. Of course, he agrees.

Sam tells Eileen that he hates the idea of the soul-catcher for her, but she says it’s preferable to Hell. She’s not ready to talk about her ordeal there yet. Sam, who has been practicing sign language since he first met Eileen (she’s deaf), says and signs that he understands.

Castiel, still impersonating an FBI agent, talks to the town sheriff, Alden Roy (Art Kitching). Kitching allows that locals seldom go missing, but an occasional tourist does. He thinks the dead boy in the lake died of an overdose, and the body is not available for Castiel to examine – it’s been shipped off to Cheyenne, since the town is too small for its own medical examiner. When Kitching presses Castiel to talk to his FBI supervisor, Castiel gives him the number at the bunker that Dean knows to answer as if he’s a Federal agent. He asks to speak to Castiel. They haven’t talked since Castiel left the bunker a few episodes back. Castiel has ignored all of Sam’s texts. Dean tells Castiel that Chuck is back in play, so he should watch himself – and that he should read his texts. They both hang up.

Being a ghost, Eileen is able to walk through walls, so she finds the hidden room where Rowena hid her most important possessions. When Sam joins Eileen (the room has a hidden door for corporeal people), he finds Rowena’s spell books. A page drops out of one of the books. Sam reads it and realizes it’s a spell Rowena never completed to bring back Mary, Sam and Dean’s mother. The spell was never completed, as it was learned that Mary was happy in Heaven, but Sam believes he can complete it for Eileen and bring her back from the dead.

Sam loads all of Rowena’s books into the back of the Impala – but then starts bleeding from the nose and collapses. The two witches from the van poof Eileen away. They know who Sam is.

Inside the van, Mom Witch explains that Rowena’s apartment was hexed to kill anybody who entered – except Sam. The dead witch on the floor is Mom Witch’s older daughter Jacinda. Mom Witch is going to use Rowena’s resurrection spell to bring Jacinda back. Alas, the spell can only be used once. Emily is making a voodoo doll of Sam, using some of his hair. This is to make him comply with their demands.

Castiel is searching the woods where people have gone missing. Melly catches up to him and wants to help. She tells him about a silver mine in the area and offers to lead him to it. Castiel tries to prepare her for the worst by giving her the “monsters are real” speech. He thinks whatever has been killing people may be using the mine as a lair. And then they find Melly’s son Caleb (Sean Quan), alive and relatively well, sitting by his tent.

Emily and Sam go back to Rowena’s apartment. Emily doesn’t know about the secret room, but tells Sam to start packing up “the good stuff.” Looking at her dead sister’s body, Emily asks if Sam thinks Jacinda is pretty. Sam is nonplused. Emily eventually confides in Sam that Jacinda tortured her, literally, trying to sell Emily’s soul to a demon and turning Emily’s tongue into a snake that bit her. Sam tries to persuade Emily to run away so that her mom can’t use the resurrection spell on Jacinda. He’ll give Emily Rowena’s spell books, whatever she wants. Emily doesn’t believe Sam and twists the voodoo doll. Sam falls back in agony.

Caleb tells Melly and Castiel that he saw a guy dragging a dead body and putting it into the lake. He tried to record this with his cell phone. Then Caleb saw that the “guy” was actually a monster. Caleb ran, dropped his phone, broke his ankle and limped back to his tent.

Then the monster shows up. It’s the sheriff. His eyes glow blue and his face sports runes. He’s a djinn. He tries shooting Castiel, not realizing Castiel is an angel. Castiel, who clearly has some anger issues to work out, is unfazed by the shots. Castiel tells the sheriff that petty little men like him always take what they want and believe their power will save them. It won’t this time. Then Castiel uses his angel blade to stab the sheriff to death, making a few more cuts than are strictly necessarily. Melly and Caleb watch, wide-eyed.

Back at Rowena’s building, Emily is forcing Sam out into the hallway. Then Mom Witch enters – with Dean right behind her, holding a gun to her head. The gun has witch-killing bullets. Emily has the voodoo doll on Sam. Then Jacinda’s ghost enters the fray – but so does Eileen, who can fight with Jacinda in the ghost dimension. During the fracas, Emily gets shot. Mom Witch uses her powers to start giving Dean a heart attack, but Sam jams one of Rowena’s hex bags into Mom Witch’s mother, recites an incantation, and Mom Witch dies. Jacinda’s ghost is getting the better of Eileen’s ghost. Eileen reminds Dean to burn Jacinda’s body, which he does, and that gets rid of her.

Castiel returns to Melly and Caleb after having (offscreen) deposited the sheriff-monster’s body in the lake. Castiel tries to heal Caleb’s broken ankle. And lo, Castiel has his zap back. Caleb is healed. Castiel doesn’t want to try to explain himself to Melly and Caleb, saying only that he has to leave the town; it’s time he got back in the game.

Back at the bunker, Sam sprinkles herbs into a water-filled bathtub. Eileen, as a ghost, gets into it. Sam recites the incantation, and Eileen becomes corporeal. Overjoyed, she and Sam hug.

Dean is waiting for Sam in the war room. Success has given Sam some newfound optimism. Sam tells Dean that they don’t make the rules, they’re the guys who break the rules. Sam says he’s pretty sure Chuck didn’t want Sam to shoot him; Dean is being driven crazy by not knowing what is part of Chuck’s plan and what (if anything) is free will. But Sam feels they can take Chuck down somehow.

Okay, first of all, nobody is sulking, which is great. Also great is the surprise return of the delightful Stern, and kudos to Sam and SUPERNATURAL for learning and using a little bit of sign language.

Tracy is fun as the main witch, and Emily’s monologue cataloguing the awful things her sister did to her is moderately memorable.

One logic glitch is that Caleb says he saw “a monster.” Well, the sheriff technically is a monster, but to the untrained observer, he’d look like a regular guy with a tattooed face. For Caleb to reach the conclusion he does, it seems like the sheriff should have looked a little weirder.

On the same “this could use a little more something” note, it’s good that Castiel has his mojo back. However, it seems like it should take something a little more specific than a routine Hunt for him to decide to rejoin the guys.

Overall, “Golden Time” is enjoyable, but not a standout.