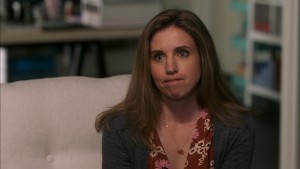 When you’ve got God, aka a writer, arguing with a passionate and informed fan onscreen, as characters in a show, but they’re talking about the show we’re watching, is that as meta as you can get? Maybe not, but it’s still majorly trippy. We then go to some unexpected places of heart and free will and deep feeling. This is all pretty awesome. Then again, there’s also that foul and unnecessary thing with the bacon.

Right from the “Then” (aka “previously on SUPERNATURAL”) clips, dread will be struck into the hearts of most fans. Is something particularly awful going to happen? Well, we have the return of Sam’s (Jared Padalecki) magic-using stalker Becky Rosen (Emily Perkins), practically the worst possible personification of fan stereotypes, so the inclination is to be afraid, very afraid.

The episode proper starts with the bunker literally on red alert: the place is bathed in red lights and sirens are going off. Dean (Jensen Ackles) is running from room to room, shooting demons. He finds his old vampire buddy Benny (Ty Olsson) dying on the floor. Wait, wasn’t Benny refusing to leave Purgatory last time we saw him? Never mind, no time to dwell on that. Dean is searching for Sam, finds him – and pleads with him to overcome all that demon blood he’s been drinking. Sam evidently killed Bobby and Jody. Sam shows no remorse. Eyes bright with malice, he telepathically snaps Dean’s neck.

Then Sam wakes up from his nightmare in bed. He finally comes out into the kitchen, where Dean has made breakfast. Apparently, Sam has hardly left his room for days, miserable about having had to kill Rowena, and also wretched about the loss of Jack, the departure of Castiel, and even the death of Ketch. Dean has found a case to work in the small town of Beaverdale, Iowa where cattle mutilations have given way to the dismemberment of a young woman. There’s no blood. Even though vampires don’t normally rip up their victims, it still seems vampire-like, and thus something the Winchesters should investigate.

Okay, time out. Trying to trick a vegetarian into eating actual meat is not unlike switching out a recovering alcoholic’s Sprite for gin. It’s disrespectful to the person’s beliefs, hostile and potentially physically harmful. What it is not is remotely funny.

Sam, posing as an FBI agent, shows up at the high school attended by the late cheerleader Susie. A memorial service has been planned in Susie’s honor, which means a scheduled lacrosse game has to be rescheduled. Vice-Principal Bailey (Alison Araya) is getting grief from a couple, the Whitfields, who want the memorial postponed instead, so their son Billy (Burkely Duffield) can play lacrosse when a university scout will be attending. If he can’t, it will be “the end of the world.” Sam responds, “The end of the world is the end of the world.” Well, he would know.

Sam and Dean examine the site where Susie’s dismembered body was found. There is no blood, which suggests that she was killed elsewhere. Sam muses that the cops will be clueless, as always, because he and Dean are there, as always, to protect them and the community from the truth. Sam sounds like he’s getting very tired of this. Dean points out that this is the kind of town that Sam used to fantasize about living in, but now Sam is soured on this as well. People here think being late for work or not getting into the right school is “the end of the world.”

Then Vice Principal Bailey calls. Cheerleader Tori (Eva Barros) has disappeared. Sam and Dean start canvassing the high school students. We find out that Billy was close with the late Susie. Her friend and fellow cheerleader Barbara seems to want to get close to Billy, but Billy’s stern mom pulls him away.

Meanwhile, we see that Becky is now happily married with two kids. Her husband is taking the children on an overnight camping trip, which means that Becky has the house to herself. She is dismayed to see Chuck (Rob Benedict) across the street. We know that Chuck is God. Becky only knows Chuck as the author of the SUPERNATURAL books about Sam and Dean, which he was able to write because he was a prophet. Becky also knows Chuck as her ex-boyfriend. (This was all covered in Seasons 4 and 5.)

Once Chuck begs Becky to let him inside, he finds that she now has a healthy business making maquettes of mundane items that show up in the SUPERNATURAL books. Becky also enjoys writing fanfic, where Sam and Dean aren’t fighting monsters, but instead just sit and talk and do laundry. She maintains this is what fans really like anyway. Chuck is pretty sure fans like monsters, too. (We’re with you on this one, Chuck.)  Becky is now properly horrified by briefly casting a love spell on Sam, but she feels she is now channeling her creativity in positive ways and has her life on track. Okay, we don’t need to be afraid of fan-shaming via Becky. Whew.

While Chuck doesn’t tell Becky his real identity, he confides that he’s fallen out with the Winchesters (true), his sister wants nothing to do with him (true), and that nobody needs him. He was hoping Becky, who used to be his biggest fan, would help him feel “bigger.” Becky is at first annoyed, but then has some compassion for this clearly lost person. She asks him what he loves to do. Chuck says he loves to write. Becky suggests he do just that.

Of course, Becky doesn’t know that the consequences of Chuck writing something are a little different than the consequences of somebody else writing. Uh-oh. In any case, her pep talk inspires Chuck to sit down – at Becky’s laptop – and begin typing away.

Sam and Dean question Barbara, but she’s got braces, which means she’s probably not a vampire (hard to get fangs up and down through the metal).

Back at the Whitfield house, Ms. Whitfield snaps at Billy, which Mr. Whitfield washes blood off his hands. We see they have a gagged and bound high cheerleader stashed in the basement. What the heck?

Surveillance footage of a car driving away from the high school at night leads Sam and Dean to the Whitfield home. Billy is telling his parents he didn’t want them to do anything for him, he doesn’t want any of this. It’s not clear exactly what “this” is, but when the Winchesters arrive, Mr. Whitfield sends Billy upstairs. Sam hears the cheerleader’s muffled moans and goes to check it out.

Mr. Whitfield says he’s ready to be arrested, but wants his family left out of it. Dean, who should perhaps suspect from this reaction that the man isn’t a vamp, draws a huge blade.

In the basement, Sam finds Tori, the missing cheerleader, attached to a bag of blood. While he’s trying to untie her, Ms. Whitfield shows up in the doorway, gun in hand.

Back at Becky’s house, she reads Chuck’s draft. At first, she’s uncritically buoyant. When he insists on some notes, though, Becky starts citing her issues – no Cas, no classic rock, not enough jeopardy. Chuck, offended, begins his rewrite.

At first, the jeopardy seems about the same. Ms. Whitfield leads Sam, carrying the unconscious Tori, up from the basement. Billy comes downstairs. He’s the vampire, and he’s torn up about both this – he killed Susie, who he loved – and what his parents have done to cover it up, dismembering Susie to make it look like she’d been killed by a crazy human and then kidnapping Tori to use as a blood donor. Billy says that his parents have to call the authorities and get Tori to a hospital, saying Billy had kidnapped her and run away. Billy will go for a ride with Sam and Dean.

To the strains of a classic rock song, we get a montage of paramedics putting Tori on a gurney, the Whitfields talking to the cops, and Dean solemnly wielding a blade on a contrite, resigned Billy in a clearing as Sam looks on, appearing just as wretched as Billy.

Okay, so far, very sad, but not jeopardy.

Well, in his writing, Chuck has jumped way ahead to the ending. Becky reads it and is aghast. It’s so dark. He can’t do that to Dean and Sam. Chuck thinks the fans will love it. Becky disagrees. (We’re pretty sure we’re with Becky on this one.) Then Becky’s family comes home. Becky tells Chuck he has to leave, but Chuck has grown to like this place – it’s full of SUPERNATURAL memorabilia, after all. Chuck snaps his fingers, and Becky’s husband and kids vanish. Chuck tells Becky he’s God. Then he snaps his fingers again, and Becky vanishes. Chuck says happily, “I can do anything. I’m a writer.”

In the car, Sam muses that he and Dean would have done for Jack what the Whitfields did for their son. Dean agrees (rather surprisingly, in this recapper’s humble opinion). Sam is depressed by all of the losses. Dean says he felt that way after the betrayal by Chuck, when they were in the crypt, but Sam brought him back from the brink. They do what they do for Jack, and Mom, and Rowena, and everybody who cared about them.

There has already been debate about Dean not mentioning Castiel in this speech. Castiel isn’t dead – he left. He’s able to do for himself right now. It makes sense that Dean wouldn’t include him with the dear departed.

Also, Dean says, with Chuck gone and no longer dictating their lives (so far as Dean knows), he and Sam are now free to forge their own path. Sam says he doesn’t feel free. He feels all of the losses. He still feels the absence of Jessica (this is his college girlfriend who was killed way back in Episode 1). Maybe it will be better in the morning, Sam says forlornly. Dean asks what if it isn’t. Sam doesn’t know.

Well, this is the essence of serious depression, and bravo to the episode for encapsulating it so succinctly. Bravo as well to Padalecki and Ackles for their performance in the scene.

Meanwhile, Chuck is typing away at Becky’s flower-decorated laptop, saying, “This is going to be so good,” while the Funko bobbleheads of Sam and Dean shudder on the table beside him.

“Atomic Monsters” is mostly a powerful, emotional episode that fills us with sorrow and dread. It does lose part of a point for the bacon thing.