An episode of powerful losses 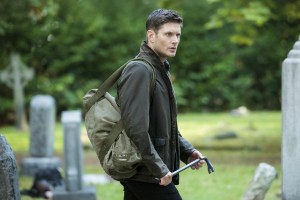 Three episodes into SUPERNATURAL Season 15, and we’re still dealing with ghosts leaving Hell to take over corpses on Earth in “The Rupture.” Sam (Jared Padalecki) has gotten a posse of Hunters to guard the perimeter of Harlan, Kansas, where they’ve managed to trap a bunch ghosts, so far, but more are showing up every minute. (We can tell this by what look like pink flares in the sky.) Witch Rowena (Ruth Connell), however, is confident that her new spell can turn the spirits into something like concrete. So Sam, Dean (Jensen Ackles), Castiel (Misha Collins), and the so-far-helpful demon Belphegor, still in the body of Jack (Alexander Calvert), all escort Rowena to the Harlan cemetery where she plans to work her magic.

Everybody wards an underground crypt, where Rowena does her spell. It seems to be working for a fraction of a second. Then Rowena collapses and declares tearfully, “We’re all going to die!” So, not exactly the hoped-for result.

Rowena says that magic can’t fix this now. If she’d gotten here earlier, maybe, but the problem is now too vast to be encompassed by her spells.

Belphegor leaves the crypt. Castiel, thinking Belphegor is trying to leave the group, goes after him. But Belphegor actually just went to look at the giant rupture in the ground. It’s not a door, as Rowena had thought, but a tear, created when God stamped his foot.

While Belphegor and Castiel are out, and Rowena is studying the Book of the Damned, Dean starts strapping on a bandolier. He is not going to accept God’s crappy ending for the world, especially after all He has put the Winchesters through. “I’ll be damned if I’m going to let some glorified fanboy get the last word.”

Then Belphegor and Castiel return. Belphegor explains that when Lilith first created all the demons, she created Lilith’s Crook, which is really more like a an animal horn (it looks like a shofar, actually) to keep them in line. Basically, the demons were loyal and obedient with Lilith (last seen and apparently vanquished at the end of Season 3) in Hell, but might have done their own thing on Earth, if not for the threat of the Crook, which could force them all to return from whence they came. Asked why nobody’s ever heard of this before, Belphegor replies that Lilith never actually needed to use the Crook; knowing that she could use it was enough for the demons. Then, when Crowley took over, he had his own methods. 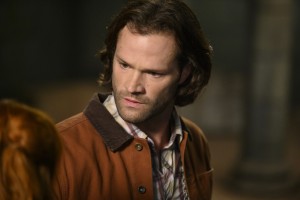 Belphegor can go into Hell and use the Crook. Rowena announces she can do a spell to close the rupture once the escaped souls are back in Hell. She needs an assistant, and requests Sam. Someone will have to stand unprotected at the edge of the rupture to toss the spell in. Dean volunteers. Belphegor says he wants someone to accompany him into Hell for protection, and that’s going to be Castiel.

Apologies for this giant hairball of exposition, but it’s what the episode coughed up.

At the hospital, Arthur Ketch (David Haydn-Jones) is perhaps not entirely recovered from having been shot several times in the previous episode (Jack the Ripper’s ghost was in his body, and Dean had to stop him from stealing Rowena’s soul-catcher). However, he is attempting to leave anyway. He is stopped by the demon Ardat (Sharon Taylor), who had hired Ketch in his freelance assassin capacity to kill Bephegor. Ardat is unhappy with Ketch’s refusal to do so, even less happy when she guesses correctly that this is about Ketch’s loyalty to the Winchesters, and completely annoyed when Ketch tries to stab her with an angel blade. Ketch says he won’t give up his friends “at any price.” After a tussle, Ardat rips out Ketch’s heart.

Farewell, Arthur Ketch. You were entertaining, and ultimately an asset for Team Winchester, even though you did so many awful things beforehand that having your heart ripped out doesn’t seem entirely unfair.

Ardat uses Ketch’s phone to text Dean. Pretending to be Ketch, she easily gets Belphegor’s location from him.

Hell is largely empty. Castiel questions why Belphegor felt he needed protection. Belphegor confesses he wanted Castiel’s company. Belphegor thinks he is growing on Sam and Dean. Castiel counters that Belphegor isn’t growing on anyone, and Castiel is particular is appalled that Belphegor is walking around in the body of Jack, whom Castiel considered to be his son. Castiel thinks Belphegor, and the entire situation, is an abomination.

Lilith’s Crook is in a locked, inscribed box in her chambers. The writing is Enochian, the angel language, so good job Castiel is there. Turns out the inscription, praising Lucifer, has to be not only read, but sung aloud. Castiel sounds kind of like a cantor here. The box opens, Castiel gets the staff – and then gets flung across the room by Ardat upon her arrival.

Ardat and Belphegor try to kill each other. Castiel tries to help Belphegor, but Ardat begins choking him. She also asks why Castiel is helping Belphegor – doesn’t Castiel know that Belphegor is trying to rule Hell?

Belphegor kills Ardat. Castiel demands to know if what Ardat said was true. Well, technically, no. Belphegor doesn’t want to rule Hell, a la Lucifer, Lilith and Crowley. Instead, he wants to blow on the Crook horn so he can absorb all the loose souls and demons into himself. With that much power, he’ll be the equivalent of a god. 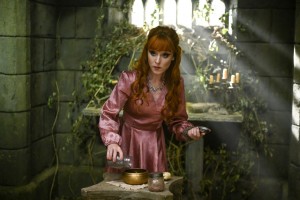 Belphegor couldn’t have done it without an angel to read the Enochian runes, so Castiel has been ill-used once again. Belphegor bats the angry angel across the room, then starts blowing on the horn, and the souls and demons start descending back into the rupture, which starts to close as Sam and Rowena perform their ritual and Dean throws in the “bomb.” So from topside, so far, so good.

Castiel’s rage is enough to get him back up and at Belphegor’s throat. Castiel knocks the demon to the ground. Belphegor’s sunglasses come off. Whoever it is protests, “Castiel, stop. It’s me, Jack.” Castiel hesitates for a second, says, “Liar,” and proceeds to pull the essence out of Jack’s body, causing it to crumble. No more Belphegor, no more Jack’s body.

And no more souls being sucked into the rift. Topside, Dean, Sam and Rowena can’t tell what’s going on.

Rowena, realizing that worst has come to worst, uses a knife to cut herself slightly and pull out her last resurrection sachet. She tells Sam she lied when she said magic couldn’t solve this. Magic can solve anything. Except this magic requires Rowena’s blood and her last breath, so that she can absorb all the souls into her body. There is powerful magic in death. Rowena says she doesn’t love anything enough to take her own life, but she does believe in prophecy, and Death’s books say that Sam Winchester will be the one to kill Rowena Macleod. Sam is horrified and doesn’t want to do it. Rowena says she understand he’s grown a little fond of her, but is he willing to let the world die, is he willing to let Dean die, just to save her?

Castiel emerges from Hell and tells Dean what happened. Dean is appalled that Castiel stopped Belphegor from getting the souls down there, no matter his motives.

Well, we know that Sam isn’t willing to let Dean die for anything. Weeping, he stabs Rowena. What makes this worse is that it can’t even be a quick death. With Sam following, Rowena staggers outside so that the souls can more easily enter her. She says, “Goodbye, boys” to the sobbing Sam and confused Dean and Castiel. Then she falls into the rift, which closes behind her.

In the curious way SUPERNATURAL has of turning our sympathies this way and that, we’re going to mourn Rowena. She started out as entirely evil and self-serving, then the lesser of two evils and still self-serving, but finally became someone who could experience and display loyalty, affection and an interest in the common good. Rowena also ends on a note of character honesty, aware to the last that she’s never going to be able to put anything above herself, except for the beliefs (prophecy, for example) that define her. If she stops believing in prophecy, then she can no longer have faith in magic, and without magic, she might as well be dead anyway.

Later, in the bunker, Sam is devastated. And there’s more bad news – Ketch is dead. Kind of amazing how that it could slip our minds in such short order that while we knew this, the guys didn’t, but it’s been an eventful episode. Dean surmises it was a demon. Probably just as well he doesn’t connect it directly with Belphegor. Dean tries to console Sam, saying that it was the only thing that Sam could do. More, God tossed one last apocalypse at them, and they won. Sam doesn’t appear cheered up by this.

Leaving Sam in his room, Dean encounters Castiel, who asks how Sam is doing. Dean blames Castiel for not sticking to the plan – if he had, Rowena would still be alive. Castiel points out that then they’d have to deal with a super-powerful Belphegor. He and Dean start arguing, with Dean blaming Castiel for much of what has gone wrong. Castiel realizes that Dean still blames him for Mary’s death (Dean thinks Castiel should have noticed something was wrong with Jack). Dean doesn’t deny this. So Castiel says he’s leaving. Jack is dead, Chuck is gone, Sam and Dean have each other. Castiel observes that Dean can barely stand to look at him these days. And Castiel walks out the door, leaving Dean alone in the room.

This plays like a Dean and Castiel breakup, versus a Dean and Sam argument. Longtime SUPERNATURAL watchers know the difference. It’s still very sad. Castiel has been through Hell, literally and figuratively, and his reward is to end up entirely alone. The only silver lining is that if the Empty is waiting for Cass to experience a moment of true happiness before it takes him, it looks like Cass may live forever.

Speaking of sadness, well, holy isolation, Batman. Ketch is dead, Rowena is dead, even the semblance of Jack is dead (though we know actual Jack is still awake in the Nothing, so there’s some hope in that quarter), and Castiel is gone. Adding to our grief is Padalecki’s restrained but surpassingly powerful depiction of Sam’s sorrow. The title of “The Rupture” turns out to describe far more than a hole in the ground; the characters’ emotions (and ours) are torn as well.