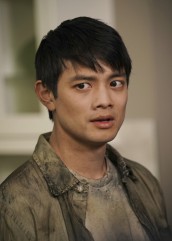 Eventful, and quite the reunion 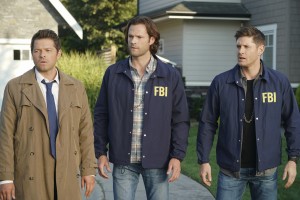 After last week’s SUPERNATURAL Season 15 premiere, we were primed for the return of the witch Rowena (Ruth Connell), but we also get four – count ‘em! – other familiar faces in “Raising Hell.”

We’re back in Harlan, Kansas, the town that got infested with ghosts from Hell in the previous episode. The quarantine that Sam (Jared Padalecki) and Dean (Jensen Ackles) previously declared with their fake FBI authority is still holding, and so is the spell keeping the ghosts from spilling out. One unfortunate woman ventures into the quarantine/spell zone and gets stabbed to death by the ghost Francis Tumblety (Lane Davies), aka Jack the Ripper.

At the high school where the quarantine evacuees are gathered, Sam makes a speech, encouraging them to stay at the high school. He is besieged with questions. Castiel (Misha Collins) is with him.

Some of the people cooped up at the high school are rightly suspicious they’re being lied to and decide to go see what’s going on for themselves.

At the same time, Tumblety convenes a meeting of the trapped ghosts and tells them he overheard our guys talking about the fact that the ghosts were freed from Hell by a literal act of God. The wards won’t hold forever, but meanwhile, the ghosts should persuade their more timid peers to stand with them.

At the high school, Sam and Castiel argue. Castiel wants to tell the dead woman’s family that she’s been murdered (though not that she’s been murdered by a ghost); Sam wants to keep it secret until the situation is under better control. Rowena, responding to Dean’s call from the previous episode, shows up and interrupts. Sam says they want Rowena to make another soul-powered crystal, the same kind she used to try to trap God’s sister Amara a few seasons back. Rowena protests that this is very difficult. Then Sam and Castiel are alerted that they have a problem.

The two humans who came from the high school into the quarantine zone are now possessed by ghosts that are destroying them from the inside. Tumblety confronts Dean and Sam and demands that the wards be removed or he’ll let the ghosts kill their hosts. Dean won’t remove the wards, though he and Sam are miserable watching the humans in pain.

Then help arrives from an unexpected source: Arthur Ketch (David Haydn-Jones), British ex-Man of Letters, now a freelance assassin, shoots the humans with iron filings, dispelling the ghosts. The hosts evidently were too far gone, as they collapse to the ground.

Back at the high school, Ketch explains that he stole the magic iron filings from the Men of Letters (along with a few other things) on his way out the door, a means of exorcising ghosts that won’t hurt their hosts. Rowena remembers that he allowed her to escape the last time they met. She clearly thinks he’s cute.

Sam and Dean explain that Jack is dead. Belphegor introduces himself. Ketch is startled, since he was hired in his capacity as a freelance assassin to kill Belphegor, who he’d been told was a monstrous threat to humanity. Since Belphegor is helping the Winchesters, this is clearly not the case. Ketch was sent by a female demon who apparently has history with Belphegor. Sam instructs Ketch not to kill Belphegor. Dean adds, “For now.”

In Reno, God’s sister Amara (Emily Swallow) is getting a massage. God aka Chuck (Rob Benedict) takes over the massage (smiting the masseuse in the process). Amara wants to know what He’s doing there; Chuck is hesitant to explain.

At the high school, another evacuee asks Castiel what’s happened to the three people now missing (he knows they’re dead, but Sam told him not to say anything). When the evacuee accuses, “You promised to keep us safe,” Castiel can hardly bear it, as it reminds him (as if he needed a reminder) that he failed in his promise to keep Jack safe.

Castiel goes to see Dean. Dean is full of anger about everything. After learning about all of Chuck’s manipulations, Dean feels that nothing is real (so much for the pep talk from Sam that Dean agreed with in last week’s episode). Castiel tells him that, “We are real.” Dean just walks out.

Dean goes patrolling with Ketch. Ketch expresses interest in Rowena, to Dean’s exasperation. Ketch also doesn’t quite know what to do with the information that the enemy is apparently God; the Men of Letters didn’t have any plans for this sort of thing, as they believed God was theoretical. A phone call about two missing Hunters leads Dean and Ketch to the Harlan meat packing plant, where they are attacked by a female ghost with an axe. However, the ghost is ordered away by someone who turns out to be … Kevin Tran (Osric Chau), previous Prophet of the Lord who was killed on Crowley’s orders. Everyone last saw him as a friendly ghost (well, there was Apocalypse World Kevin, but he’s not a part of this story, so don’t worry about that one).

But how is it that Kevin is with the souls released from Hell? Didn’t God say he was sending Kevin to Heaven? Kevin says that God lied about that. On the upside, Kevin has a reputation with the other souls because God Himself cast Kevin down, so they actually listen to what Kevin tells them to do. Dean sees this as helpful. Kevin warns them that he can sense the warding failing around the town.

In Reno, Chuck proposes to Amara that they go away to another dimension, maybe create a new species together. Amara, though, is perfectly happy in Reno. She realizes that Chuck needs Her, and He’s never needed Her before. She sees that He’s wounded in His shoulder (from Sam shooting Him with God’s gun at the end of the previous season) and not at full strength. When Chuck fingers the bullet hole in His shoulder, Sam feels a twinge in his twinned wound, but tells Dean it’s nothing. (Dean doesn’t buy this, but there’s not much he can do.)

When Kevin returns to the gathered ghosts, Tumblety is planning to have them mass together and push open the warding at its weakest point. Tumblety also figures out that Kevin is spying for Sam and Dean.

Ketch helps Rowena make her soul-catching crystal. They almost seduce each other, but are interrupted by a phone call from Dean.

Rowena starts to take the crystal into the ghost-infested quarantine zone. She’s confronted by Tumblety, who has history with her. Tumblety tells her to tell the Winchesters that he’s got their boy (meaning Kevin), and they’d better negotiate if they want him not to be obliterated. Ketch tries to help Rowena, but Tumblety knocks him unconscious.

Sam, Dean, Castiel, and Belphegor make it to the meeting with Tumblety and the ghosts. Tumblety says he’ll devour Kevin if they don’t open the wards. Tumblety gets shot full of rock salt and Kevin is released before permanent damage is done. He explains about Tumblety’s plan to amass souls at the weakest point of the wards.

Our team heads to the perimeter and Rowena unleashes the power of what Dean calls the “soul catcher.” It works, pulling souls into it. Then Ketch shows up – except it’s Tumblety possessing Ketch’s body. He wrests the soul catcher away from Rowena. Since souls are extremely powerful, Tumblety now has an item of great magical power, which he will use to break the wards. Oh, Tumblety, didn’t anybody at Villain School tell you not to monologue? His speech gives Dean time to shoot Tumblety’s vessel, i.e. Ketch with iron bullets, to make the ghost leave. Tumblety exits Ketch’s body, enabling Rowena to get the soul catcher back and pull Tumblety’s soul into it.

Unfortunately, Ketch is now wounded. As he’s being loaded into an ambulance, Dean apologizes for shooting him; Ketch is understanding. Castiel is baffled that his attempt to heal Ketch failed. Sam thinks maybe it’s because Castiel is tired, like all of them are. (We’ll take a wild guess that this isn’t the real reason.) 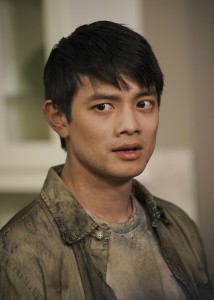 Kevin wants to leave the quarantine zone. As a soul who’s been to Hell, he can’t get into Heaven. There have been exceptions, like John Winchester, but God did that back when he was happy with Sam and Dean. Kevin’s choices are going back to Hell and being tortured for eternity, or wandering the Earth and maybe going crazy. The latter seems better than the former. Kevin says to Dean and Sam, “I love you guys,” then exits the quarantine zone through the small hole Belphegor makes for him in the warding.

In Reno, Amara tells Chuck that She’s going out by Herself. She is willing to be in the same universe as Him, but doesn’t want to be with Him. She realizes that Chuck needs Her help to leave this world; He’s diminished in power. She feels that She’s become a better version of Herself, while Her brother has stagnated. Amara leaves Chuck alone in the Reno hotel suite. He is frustrated and unhappy.

Sam, Dean, Castiel, Belphegor, and Rowena watch an abundance of souls shooting up from Hell. Rowena says her soul catcher can’t contain them all, and Belphegor’s wards are going to fail at some point. Nobody has an idea of what to do next.

There’s so much going on in “Raising Hell” that it’s tempting to draw a diagram. What exactly is going on with Chuck? Might Amara turn out to be an ally, or is She just going Her own way? Why did Chuck cast Kevin’s soul into Hell? (He seemed to be a good guy on Earth.) Why can’t Castiel heal Ketch? Will Dean recover from his funk about a certain amount of predestination? And what are they going to do about all of those souls pouring out of Hell? These are all compelling questions that make “Raising Hell” a strong episode, even if it could do with a tiny bit more humor to leaven all the doom.