Half standard standalone, half super-meta 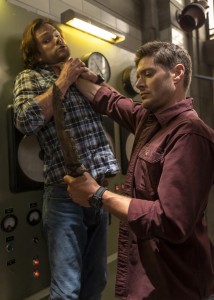 Three female college graduate friends are camping together in the woods of Colorado. There’s a noise outside the tent, and all of a sudden, they are attacked.

Sam (Jared Padalecki) and Dean (Jensen Ackles) head out to investigate. Sam is still having nightmares about being a demon and killing Dean. Not surprisingly, Sam doesn’t want to open up about this to his brother.

In Colorado, Dean and Sam pose as Fish and Wildlife agents Ford and Hamil. (There is a running gag that nobody who sees Dean’s i.d. recognizes him because the photo is so old.) Although the newspaper has blamed the killings on a mountain lion, local sheriff Dignam (Rachel Hayward) doesn’t believe an animal is responsible.

Sam and Dean go to question attack survivor Ashley Monroe (Anna Grace Barlow), whose description of the attack fits with werewolf behavior. Even though it wasn’t a full moon, it could have been a pure-blood.

Sam and Dean even get a name – Andy May (Markian Tarasiuk) – and go to visit the young man and his brother Josh (Luke Camilleri) at their cabin in the woods. When Josh refuses to touch Dean’s silver pen, that would seem to confirm that he’s also a werewolf.

Dean is all for killing the May brothers, but the phone rings and Ashley needs to be picked up from the hospital, so the Winchester brothers leave. Left alone, Josh scolds younger brother Andy for leaving Ashley alive, but promises they can stop hunting people after this if that’s how Andy wants it. Andy isn’t sure he buys it. 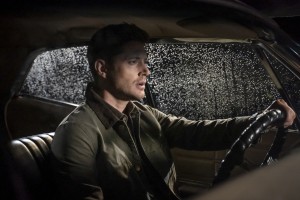 Dean and Sam install Ashley in their hotel room. Sam murmurs to Dean what we’re all thinking: this case seems amazingly easy. They show up, there’s an eyewitness, they find the culprits in no time. Chuck, what are you up to back there with Becky’s laptop?

Sam and Dean are once again going out to kill the May brothers, but Ashley begs them to stay with her until she falls asleep. She is very sad about the loss of her friends, and not sure where her life will go. Wouldn’t it be great, she muses, if life was all planned out for you? Dean, thinking of God writing their lives, says no, it wouldn’t.

Dean falls asleep – and Sam shakes him awake. Sam went out to get food. When he returned, the door was open, Dean was asleep, and Ashley is missing.

The boys return to the May house in the woods. Ashley is tied up in a room where the walls are covered in blood. Josh wants to eat her heart, Andy is still hesitant. Ashley manages to scream through her gag. The Winchesters hear her, come running, there’s a big fight. Andy gets the drop on Sam, who puts his hands up – he can see Andy doesn’t really want to shoot him. Josh really does want to kill Dean, and is about to do so, when he’s shot dead by Andy (who uses Sam’s gun that has silver bullets). Andy tearfully tells the Winchesters and Ashley (who didn’t do anything useful during the fight) that he knew Josh would never stop killing humans. He was a monster. Andy knows that he’s a monster, too, and fatally shoots himself.

Dean moves to reassure Ashley – who trips and falls backwards, impaling herself on a set of deer antlers on the floor.

Sam and Dean are shocked speechless. Over the years, they have failed to save plenty of people, and have had others die after the initial rescue, but they’ve never had anyone die before because one of the Winchesters was plain old clumsy.

Before anything else happens, Ashley gets up off the antlers, not at all dead – and not at all Ashley, either. In fact, she’s Lilith, mother of demons. Now the boys are shocked in a whole different way.

Lilith (in Ashley’s body) explains that after she died, she was sleeping in the Big Empty. God woke her up with the idea that, after she was rescued, she’d seduce Dean. Except she tripped and fell on the antlers. So much for that story. “Story?” Yeah, Lilith says, you know how He is about his stories. She wants the gun that God gave the Winchesters, the Equalizer – although Lilith refuses to call it that. Sam had used the gun to shoot God in the shoulder, causing Sam a similar wound. The guys aren’t going to hand it over, and pull a demon blade and an angel blade. Lilith is happy they’re resisting and enjoys zapping them to the floor.

Dean gets up, but Sam remains unconscious. Worried for Sam, Dean offers to lead Lilith to the gun. Lilith says that if Dean is lying to her, she’s not allowed to kill him (per God), but she can make him wish he was dead.

While unconscious, Sam has a nightmare. He and Dean are back at the bunker, beating the crap out of each other. Dean once more bears the Mark of Cain, is demonic, and stabs Sam with Cain’s blade. Sam wakes up, gasping, sees Dean and Lilith are gone, and runs out into the night.

In Dean’s car, Dean asks why Lilith is doing all this. Lilith isn’t overjoyed about it, either. She died trying to free Lucifer from the cage, and the Winchesters screwed that up. Dean asks why she’s mad at them, since that was part of God’s plan, too, right? Lilith replies that she can’t hurt God, but she can hurt them. She reminds Dean of their “wouldn’t it be great if life were all planned out”/”No, it wouldn’t” dialogue. Dean guesses this is Chuck’s writing. Lilith says it is, and that He is no Shakespeare, more of a low-rent Dean Koontz. But God is obsessed with ending the world by having one Winchester brother kill the other. Maybe, Lilith muses, that’s why Sam and Dean had to see the werewolf brothers’ murder/suicide: “Foreshadowing.”

Sam takes the werewolf brothers’ truck, while Dean takes Lilith back to the tacky motel room in the small Colorado town.  Dean was of course lying about the gun being in the room, so Lilith starts torturing him with Death by a Thousand Cuts. She gets to Cut Four when Sam breaks in and shoots Lilith between the eyes. This doesn’t kill her, but it at least keeps her from moving around – it’s a Devil’s Trap bullet.

Sam takes out the knife he used to kill Lilith back in Season 3. Lilith says he was only able to kill her because she let him and destroys the knife. Sam and Dean run for the parking lot, only to find themselves frozen in place. Lilith has freed herself and deduces that they must have the gun with them somewhere – they wouldn’t just leave it laying around the bunker. She finds it in the Impala’s glove compartment. Then she melts the gun and tells the boys she’ll see them soon.

Back at the bunker, Sam leaves another voicemail for Castiel (he’s left many, all unanswered), explaining what’s happened now. Dean is miserable and crestfallen. God was supposed to be gone, they were supposed to be free and in charge of their own destinies, and instead, he and Sam are still in the maze of God’s writing. Dean tells Sam about what Lilith told him about the only ending God wants. Sam, in return, finally tells Dean about his nightmares/visions. Dean can’t believe Sam didn’t tell him before. Sam says he’s now wondering if he’s somehow gotten into God’s head by firing the Equalizer at him. Dean is afraid they’ll either be in “the hamster wheel” forever, or else they’ll get boring and God will kill them. Sam says, no, they fight. Dean asks how they’re going to fight God. That’s a valid question.

“Proverbs 17:3” has going for it a lot of playful, meta self-criticism, and of course Sam and Dean bucking each other up. Also, their reaction when they think essentially startled Ashley to death is pretty humorous. However, the episode has such a long wind up to the reveal of Lilith that we spend much of the first half wondering if we’re watching something that’s meant to be funnier than it is. We can appreciate that the ground has to be laid, but it seems like maybe we could have covered it a little quicker and left more room for the good stuff that follows.