Supernatural Season 15 Back and to The Future Season Premiere recap 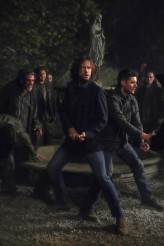 TV Review: SUPERNATURAL – Season 15 – “Back and to the Future” – Season Premiere

Off to a brisk and optimistic start 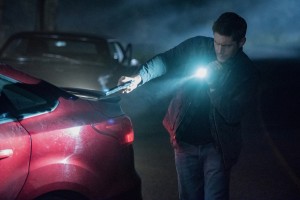 Jensen Ackles as Dean in SUPERNATURAL – Season 15 – “Back and to the Future” | © 2019 The CW Network, LLC. All Rights Reserved/Dean Buscher

Monsters, monsters everywhere. Sam (Jared Padalecki), Dean (Jensen Ackles) and Castiel (Misha Collins) are fighting everything coming at them in the graveyard, and there’s a lot of everything. Then Castiel spots a possible escape route, grabs the eyeless corpse of Jack (Alexander Calvert) and shouts to Dean and Sam.

They retreat to a mausoleum, bar the doors with a rifle, and try to figure out a next move. Dean says he always suspected Chuck’s squirrelly act and his smile, “half-nice and half ‘I’m going to tear your throat out’.” Sam theorizes that the risen dead outside are possessed by souls from Hell. Dean says that Jack didn’t deserve what happened to him. Sam asks if Castiel can resurrect Jack. Castiel mournfully says he doesn’t think so.

They’re trapped. Even if the door holds, as Dean observes, the options are to go outside and get torn to shreds, or stay inside and starve to death. Castiel points out that he won’t starve. Dean doesn’t find this observation useful.

And then “Jack” gets up. But Castiel realizes this isn’t Jack – it’s a demon possessing his body. The demon introduces himself politely, like a friend of a friend at a party. He’s Belfegor, and he says he can help. Belfegor/Jack finds a pile of clothing left by a homeless squatter, and uses the sunglasses left there to conceal Jack’s eyeless sockets to look more normal (and to save Calvert and the makeup department a lot of grief).

Castiel wants to kill Belfegor for defiling Jack’s body, but Dean and Sam want to hear him out. Belfegor of course knows who the Winchesters are (at this point, what demon or angel doesn’t?). He thinks the graveyard mess is their doing, and at first thinks they’re pulling his leg when they say, no, this one was God. When Belfegor accepts this, he says he likes Hell the way it usually is. He punches a clock, a soul comes in, he tortures it, he likes the routine. He wants the Winchester to get everything back to normal.

Belfegor can’t get the souls back into Hell, but he can at least get them out of the bodies in the graveyard. The now-empty corpses fall down, no longer animated, and our guys can leave. But where did the souls go? 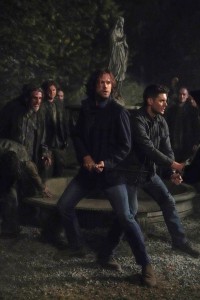 Jared Padalecki as Sam and Jensen Ackles as Dean in SUPERNATURAL – Season 15 – “Back and to the Future” | © 2019 The CW Network, LLC. All Rights Reserved/Shane Harvey

Funny you should ask. A few of them show up in the smart phones and mirrors of a pair of teens who are happily trying out different kinds of makeup (lipstick, etc.) together. Then the young women see the ghosts, start bleeding from their own eyes and rending their faces.

In the car on the way back to the bunker, Sam checks the news. So far, no mention of a worldwide apocalypse. Belfegor says this may be just for now. There are three million souls in Hell that could get loose. But he does know a containment spell big enough for a whole town, a magical circle that will keep ghosts from getting in or out. The ghosts will probably hit the nearest town next. Dean figures they can evacuate the town by lying to the residents.

Then they spot a car on the road, abandoned, doors open, lights on, lots of blood but no body. This seems like a Woman in White ghost situation. Sam thinks it may be the same Woman in White they dispatched years ago. Dean says if she’s back, everything they ever killed is back. Well, that’s a leap, but they way it’s presented means it’s probably true. So is SUPERNATURAL Season 15 going to be a revisiting of the Winchesters’ greatest hits?

Elsewhere, a terrified woman and her little girl are trying to elude a knife-wielding killer clown ghost.

The next morning, in town, our guys easily find a parking space (so maybe Chuck is still looking out for them, just saying). Dean wants to do the FBI impersonation thing with Sam and leave Castiel to babysit Belfegor. Castiel says, somewhat abashed, that he just can’t do it. He can’t even look at Belfegor in Jack’s body. So Cas goes with Sam, and Dean stays in the car with Belfegor.

In the car, Dean puts the Equalizer pistol from God in the glove compartment. Belfegor remarks on how good-looking people have gotten since his days as a human on Earth, back when everybody was worshipping a large rock. He comments that Dean, for example, is gorgeous. Dean is appalled and asks how long it will take Belfegor to find a new body. Belfegor says he’ll jump when a fresh one comes along; he doesn’t want to go into a decaying corpse. He asks who Jack was. Dean replies, “He was our kid, kind of.” Belfegor seems to get that this explains why they’re all so upset. Oh, and one more bit of news – the spell requires a soul and a human heart. Great.

Dean calls Rowena and tells her (she remains offscreen) that they need her. Belfegor then tells Dean he’s a fan. Dean is caught off-guard. Belfegor explains that he watched what Dean was doing when he was in Hell, having gone from tortured soul to soul torturer under the eye of high-ranking demon Alistair. Belfegor thinks what Dean inflicted on those souls was art. Now Dean is disgusted and shamed.

Dean asks Belfegor what’s going on in Hell. Belfegor says it’s like an anthill on fire. All the doors popped open, the sky caved in, the souls got out. Including the cage? Dean asks. Let us cast our minds back to the Season 5 SUPERNATURAL finale, when Sam, with Lucifer inside him, and our universe’s archangel Michael, inside Sam and Dean’s half-brother Adam, fell into Hell and were trapped in the cage. We know that Sam (and a little later Lucifer) got out. Michael and Adam have been in the cage. But now, Belfegor says, the cage is open, too. Oh, no, more Michael ahead. Our universe’s Michael, just like the alt-u Michael, wanted Dean as a vessel. The only good news is that our universe’s Michael wasn’t, when last we saw him, bent on burning all of Creation. However, he’s been stuck in a Hell cage for a long time, so who knows what he’s like now? And whatever is going on with Adam, John Winchester’s son from an extra-marital relationship? We’re probably about to find out. Dean, of course, is worried about Michael, who is likely to be extremely angry.

Castiel heals Sam’s stab wound, inflicted by the clown. The woman and child goggle. Castiel explains that he’s an angel. When asked about himself, Sam replies that he’s “just a guy” and that the clown was a ghost. Castiel sees the bullet wound Sam received when he shot God with God’s gun. (Woman: “You shot God?” “Castiel: “It’s a long story.”) Castiel tries, but can’t heal the bullet wound – it has a kind of energy he’s never encountered before. Sam winces, but says he’s fine. (Aiiee.)

The town sheriff unfortunately comes across the Woman in White. Dean and Belfegor hear him scream, but don’t arrive soon enough to save him. Good news from Belfegor’s point of view: they now have a fresh human heart for the spell.

While Sam and Castiel are walking the woman and little girl down the street, they are again attacked by the clown ghost – and three more ghosts.

The Woman in White remembers Dean and tosses him into a wall. She also attacks Belfegor. Dean gets her off of them long enough for Belfegor to complete the spell, which visibly rolls through town.

Sam and Castiel get the woman and child across the line just ahead of the ghosts. The ghosts are irate that they can’t cross the line. Sam, clearly looking for something snappy to say but too tired to find it, finally tells the yowling clown ghost, “Shut up.”

After getting the woman and child safely to the high school, warning them not to mention ghosts or angels, Sam and Dean contemplate the situation. Castiel is really uncomfortable with Belfegor/Jack, and gets only more so when Belfegor tries to talk to him.

Meanwhile, how are Sam and Dean going to de-ghost the town before the real FBI shows up and everybody realizes there’s no gas leak? They don’t know. Dean tries disinfecting Sam’s bullet wound. Dean feels a sense of uselessness. It’s like he and Sam have been rats in a maze for God. Sure, they could go left or right, but it’s still a maze. Sam says they’ve still saved people. And if God is really gone, abandoning our world like he abandoned “Apocalypse World” (what these reviews have been calling alt-u – sue me) and perhaps all his other creations, Sam says, this is a good thing. Because if he and Dean can win this one, it’s their win, and nobody can take it from them. God will be done messing with them. Dean is immensely cheered up by Sam’s perspective.

The meta is now so overwhelming that it’s blinding. This aside, “Back and to the Future” is a very enjoyable episode. It shows Calvert’s range, allowing him to play a laid-back hipster type with Belfegor. We get some agreeably creepy ghosts. We also get a clear statement of the stakes, which make complete sense in context, even if the whole “we were being written/now we don’t have an author” thing is enough to make our heads spin. Of course, it would be just like Chuck to pretend to leave, only to drop everybody into a larger maze. Not knowing for sure is part of the fun here.

WonderCon 2011: The scoop on what V Season 3 would be … if there is a ...
Exclusive Interview: Eloise Mumford navigates THE RIVER
TV Review: THE VAMPIRE DIARIES - Season 3 - “The Departed” - Season Fi...
DECEPTION: Creator Chris Fedak talks magic and crime solving - exclusi...