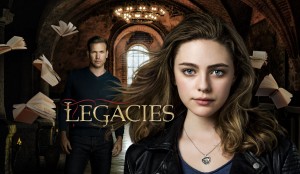 LEGACIES, now on The CW Thursday night in its second season, is created by Julie Plec. The series, a spinoff of THE VAMPIRE DIARIES and THE ORIGINALS, is about the Salvatore Academy, a private high school where young witches, vampires, werewolves and other supernaturally-inclined teens can study without having to hide their true identities. Plec has directed two episodes, including the Season 2 premiere.

Plec is also an executive producer and director on The CW’s aliens-on-Earth drama ROSWELL, NEW MEXICO, which returns for its second season in March.

ASSIGNMENT X: You’ve got two shows on the air right now. How do you schedule your prep time as a director with all of your producing and show-running?

JULIE PLEC: It’s complicated. This [season], I did the smart thing, which is that I decided to do the season premiere of LEGACIES. So I made a point of getting as ahead as I could on the scripts and the show-running side before that, so that then I could actually take that three weeks to do it, and not end up catastrophically behind. So each year, you end up trying to figure out, what’s the best time that I could get away? Last time, I did it on [LEGACIES] Episode 10, and as I was on set for Episode 10, we got picked up for three more, and I thought, “Ooh, this was a mistake. I’m going to regret this.” So it depends on the show.

AX: In terms of what’s happening on the different shows that you’re show-running, do you go, “Okay, they’re all on the CW, so we’d better not have X, Y, or Z happening here if it’s happening there,” or are you ever like, “Well, you know, I like X, Y, and Z. It’ll feel different if it’s over here”?

PLEC: Well, we did. It’s funny, because we had a unicorn scripted into one of our episodes last year, and we got the call that LEGENDS OF TOMORROW had a unicorn. And so we rewrote the unicorn, and we changed it to a Pegasus, and then we got the budget for the Pegasus, and I was like, “Screw it. We have a completely separate audience, it’s in their season premiere, it’s in our Episode 12. We’re not even going to be on at the same time, and in the world of Netflix and in perpetuity, no one’s ever going to notice.” Honestly, streaming has given us the freedom to be more comfortable overlapping, because ultimately, it exists in another universe down the line anyway.

PLEC: It’s incredible. What makes me envious of the streamers, is the lack of Broadcast Standards, and the lack of running time requirements. Because I have taken a perfect episode and made it an imperfect episode by just trying to get that last forty-five seconds of time out. So that’s one of the frustrations of watching everybody else get to do it without all those rules, but really, what it’s done is – I mean, The CW has never been shy about pushing boundaries in their storytelling, and I think that we sort of predate the streamers in being really risky and bold. But if anything, it’s just allowed them to go bigger and better and bolder, and take bigger swings. Especially given the success of The CW shows [repeating post-broadcast] on the streaming networks, they’re getting the validation that they’re not getting necessarily through the metrics, but they’re getting the creative validation after the fact, and saying, “Okay, what we’re doing is, we’re making great television that people globally love,” and I think that’s got to be a good morale boost for the network itself. 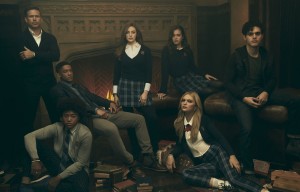 AX: Can you talk about the new season of LEGACIES, starting with the fact it started with nobody remembering Hope Mickaelson, played by Danielle Rose Russell, even though she remembered all of them?

PLEC: We began basically right after we ended [Season 1], but we used the first episode to spawn several months over the course of what is ultimately the summer break from the school. And so we’ll see who went home, who got left behind, how everyone’s doing, and what the world looks like when everyone has no memory of Hope. The theme of the episode is, what do you do to fill a hole when you don’t know what’s causing the hole in your life, and what lengths do we take to fill ourselves back up from whether it be loneliness that we don’t understand, pain that we don’t understand. How do we move forward? And so we start the season with a lot of new potential relationships, people doing things that they never would have done before in the name of filling that hole, and moving on with their lives. And then we see Hope, and we have to wait and see how she’s going to integrate herself back into that world.

AX: Could you cross over LEGACIES and The CW’s CHARMED reboot, since they have a somewhat similar universe of magic and magical beings? Would you want to?

PLEC: No. I’ll tell you what I would do in a heartbeat, though, is LEGACIES and SUPERNATURAL, before they hang it up. We got offered that Season 1 of THE VAMPIRE DIARIES. The network said, “Hey, would you be interested in crossing over with SUPERNATURAL?” And we said, “No,” because our worlds didn’t match. We didn’t at the time deal with things like Heaven and Hell and demons. But I feel like in LEGACIES, a show where anything goes, we could absolutely cross paths with the Winchesters happily.

AX: Well, if Alexander Calvert’s Jack character is still alive, he could attend the Salvatore Academy …

PLEC: He’s the right age. Not a bad-looking kid, I’ll tell you. He’d be more than welcome. 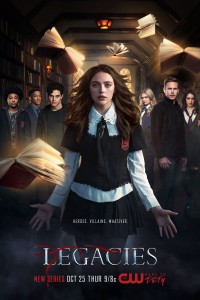 AX: You’ve been involved in shows like THE VAMPIRE DIARIES and THE ORIGINALS that have helped shaped how The CW looks and feels as a network. What does that feel like?

PLEC: I am very proud of that actually, and I’ve noticed it. I’ve noticed it happen. I noticed ARROW take on a new look after one of our directors went over and started doing ARROW for a season, and I noticed that all the Warner Brothers shows have really challenged themselves to be as cinematic as possible. And Warner Brothers as a studio supports that, and really wants those shows to look great, and then I’ve noticed the CBS-produced shows stepping up their game, and getting into a more cinematic universe as well, and I think that that’s what’s going to keep broadcast alive and thriving, is a commitment to the cinematic experience. And I’m really proud of The CW as a whole, but also what I do to help that.