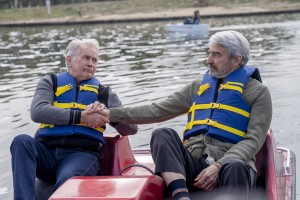 Netflix’s comedy GRACE AND FRANKIE premieres its sixth and penultimate season on Wednesday, January 15. Created by Marta Kauffman & Howard J. Norris, GRACE AND FRANKIE deals with what happens when Grace Hanson (Jane Fonda) and Frankie Bergstein (Lily Tomlin) are both left by their law partner husbands, who have fallen in love with each other and get married.

Waterston, a native of Massachusetts, was nominated for a Best Leading Actor Oscar for his performance as real-life reporter Sydney Schanberg in THE KILLING FIELDS. Waterston has been nominated for seven Emmys for his work as an actor, and won an Emmy for his hosting of the informational series LOST CIVILIZATIONS. He is also a strong advocate for the environment, having twice been arrested at demonstrations demanding government action on climate change.

Both Waterston and Sheen have extensive careers on stage, film and television, but Sheen is perhaps still best known for playing U.S. President Jed Bartlet on the series THE WEST WING, while Waterston can be seen pretty much every day as New York City prosecutor Jack McCoy, the character he played from 1994 through 2010, on repeats of LAW & ORDER.

Asked about reactions to GRACE AND FRANKIE, Waterston makes a reference to both shows. “People were astonished, and astonished by the show, frankly. They don’t expect such delicate and difficult and hard subjects as late in life sexual orientation changes, and divorce, and death itself, and aging to be funny at all, and so I think people are frankly astonished. They were astonished to see Jack McCoy claiming that he was a homosexual, and they were astonished to see the President of the United States want to marry him, especially if that involved leaving Jane Fonda and Lily Tomlin which was really insane. So yeah, I think that’s the general reaction that I’ve gotten, astonishment and delight.”

At home, Waterston says, the reaction is much more subdued. “I live in the country, way out in the middle of nowhere. So the sheep and goats were not moved or impressed in any way by this show, or any other that I’ve ever done.”

ASSIGNMENT X: Have you tried taking a laptop out to the field to show them GRACE AND FRANKIE and seeing if they respond to the show?

SAM WATERSTON: I very often use them to practice long speeches on. And they don’t seem to mind. They don’t complain. And there are no critics [laughs].

AX: Before GRACE AND FRANKIE, did you ever think of doing a half-hour comedy, or did you do it because it was this material and these people?

WATERSTON: When I first started out, I started out doing comedy almost exclusively. And then I began to feel like there was a danger that I might get trapped there, and so I struggled for a long time to be taken seriously. And then it took me this long to fight my way out of that paper bag.

AX: Do you enjoy having Martin Sheen as a scene partner?

WATERSTON: It’s absolutely invaluable. He is so generous of spirit, such a good-humored person, so much fun to be with that, as Jane was saying, making a TV show is hard work, but not with him. 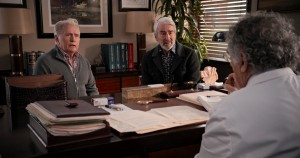 AX: You aren’t Jewish, but you play an alta cocker – that is, an old Jewish guy – with great veracity.

AX: Did you do any research, or do you know enough old Jewish guys that you were able to pick it up from people in your life?

WATERSTON: I hope I know enough. I worked with Walter Matthau, and paid a lot of attention to him, and he certainly was the world’s foremost expert on that. And then, I’ve spent a long career, a big part of my career, in New York, and so I’ve seen this world, which is not exclusively Jewish by any means, but a lot of what we associate with Jewishness has a lot to do with New York and the East Coast.

AX: How do you like the Netflix style of working, where story-wise, you’re going from one to another in terms of the episodes, and the scripts are longer than they would be for a half-hour network show?

WATERSTON: Well, I love the fact that there aren’t commercials interrupting the shows. I think that’s an absolutely priceless thing. Because it’s a hobby-horse of mine that we’re just being perpetually sold something, all the time. So it’s nice to have a story that’s a relief from that.

AX: This was back in Season 1, but how amused/surprised were you when the payoff to Sol having slept with Frankie and coming home to tell Robert about it, was that Robert was face-down from a non-fatal heart attack already, and everybody assumed that the heart attack was because Sol had told him?

WATERSTON: Well, I was as surprised as anyone else, and my hat is off to our writers for having come up with this complete surprise to me, and a totally interesting dramatic turn. I loved it.

AX: Were there any things that you had hesitation about, like the risqué bucking bronco on the lawn, which we hear about but don’t see?

WATERSTON: Yeah, we [Waterson and Sheen] were in perfect agreement about the idea that neither of us wanted to get anywhere near it.

AX: And what would you most like people to know about GRACE AND FRANKIE?

WATERSTON: What would I want them to know about GRACE AND FRANKIE? What a joy it is to make. I guess that’s the first thing that comes to my mind.

Related: Interview: GRACE AND FRANKIE co-creator on her Netflix comedy