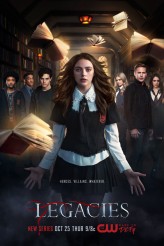 The creator talks about her new series 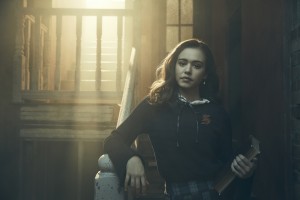 The CW’s new Thursday-night series LEGACIES is a spin-off of both THE VAMPIRE DIARIES, which ran on the network for eight years, and that series’ spin-off THE ORIGINALS, which concluded its five-season run in May. In LEGACIES, Hope Mikaelson (Danielle Rose Russell), the daughter of the late vampire/werewolf hybrid Klaus and granddaughter of a witch, is one of the first enrollees at the Mystic Falls, Virginia Salvatore School for the Young and Gifted. The Salvatore School is in fact a haven for supernatural adolescents. The headmaster is Alaric Saltzman (Matthew Davis), first introduced in THE VAMPIRE DIARIES, in which he died and came back (not unheard of for characters on that show).

LEGACIES was created by Julie Plec, who also created THE ORIGINALS, and developed THE VAMPIRE DIARIES with Kevin Williamson for television, based on the novels by L.J. Smith.

Plec, who is also an executive producer on LEGACIES, talks about her inspirations and hopes for her latest creation.

ASSIGNMENT X: At what point did you decide that you weren’t ready to say goodbye to the VAMPIRE DIARIES universe, and decide to pitch LEGACIES?

JULIE PLEC: I think in the beginning of Season 4 of THE ORIGINALS, when we were entering into the last season of THE VAMPIRE DIARIES, I started activating a long-term idea that I had had for trying to keep the show alive moving forward. Because I could see the ending of THE ORIGINALS coming, I could see us wanting to put a point on that story. So it was in the works just in my head for a solid year, as we made another season of THE VAMPIRE DIARIES. But I’ve wanted to do a supernatural boarding school show since the beginning of my writing career.

AX: Why, in your opinion, were VAMPIRE DIARIES and THE ORIGINALS finite stories, and LEGACIES is potentially less finite?

PLEC: For me, THE VAMPIRE DIARIES became a finite story when Nina Dobrev [who played Elena Gilbert] decided to move on, because I felt like that love story needed to come to an end, and needed to know who did she choose, and who’s going to live happily ever after. And it’s hard to do without her. And THE ORIGINALS, I always felt, needed to be a close-ended story, because these are immortal creatures, and I always knew that the end of that journey would be release from immortality in some way or another, whether it be one of them or all of them. I didn’t know what path we’d go down, but this is just a school. This school can live on, and it can continue to spawn generations of students and kids, and so it has a format that allows it to be longer-lasting.

AX: You’ve mentioned BUFFY THE VAMPIRE SLAYER, in its high school years, as something you’d like to reference in LEGACIES. With Alaric taking on mentoring Hope, as well as his own daughters and the rest of his students, is he meant to be like the Anthony Stewart Head Giles character?

PLEC: Well, I’ve said publicly that this show is kind of my love letter to BUFFY and HARRY POTTER all together. I was a huge fan of the HARRY POTTER books, I was obsessed with BUFFY the series, I loved the dynamic between Buffy and Giles, and really modeled Alaric and Hope after that duo.

AX: Lots of hanging out in the library?

PLEC: Lots of hanging out in the library, absolutely. And the Salvatore Library lives on for that exact reason.

AX: Will you be using metaphor a lot to tell stories in the way that BUFFY did?

PLEC: Yeah. We dabble in theme and metaphor. I like to do a lot of what I call supernatural substitutions to real-world problems. All of our kids have their own real-world substitution for what plagues them. Lizzie Salzman [played by Jenny Boyd] is a little bit bipolar, Hope is a PTSD survivor, our character M.G. [Quincy Fouse] is hyperactive. We don’t say it in those terms, because they’re struggling with supernatural problems, but that’s really what it’s all based on. 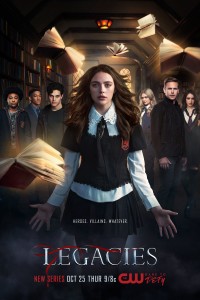 AX: You’ve actually compiled dossiers on each of your main characters. Do your actors all know their characters’ back stories?

PLEC: They do. We gave those dossiers to all the actors when they first started. We said this was what would come up. We put them together – this is how I pitched the network when we were doing our series pitch, after we were picked up, I brought in file folders for each individual character with the photo shoot stuff that they had done and all that, so it’s fun.

AX: You’ve mentioned that we may see eventually see some characters from THE VAMPIRE DIARIES and/or THE ORIGINALS on LEGACIES. If they’re human characters, will they have aged noticeably?

PLEC: Much like how Ian Somerhalder never seems to age, I feel like their age will feel appropriate to where they are. You have to remember that since THE VAMPIRE DIARIES finale, in the timeline, it’s been twelve years, I think. So Jeremy Gilbert [played by Steven R. McQueen] is pushing thirty [laughs].

AX: SUPERNATURAL, over the last few years, has been trying to do a spin-off. Since you have a monster of the week format to some extent, do you think you might be the unofficial spin-off to that, as well as the official spin-off of your own shows?

PLEC: [laughs] Well, let’s just call us the unofficial SUPERNATURAL spin-off, and then we can all go on and be on the air for twenty-five years. What’s so funny is, we got approached to do a crossover with SUPERNATURAL and VAMPIRE DIARIES in Year One, and Kevin and I both felt like, our worlds would never cross like that, in that we were just vampires, witches, and werewolves, and they are everything in between. And now that we’re dabbling in that realm, I would welcome the opportunity. I think it would be an unachievable logistical nightmare, and therefore it will probably never happen [laughs], but I think it would be amazing.

AX: Can Alaric have more kids, besides his twin daughters who are enrolled at the Salvatore School?

PLEC: He biologically is perfectly capable of such a thing, yes, although, oh, my God … [laughs].

AX: Is there more humor in LEGACIES than there was in VAMPIRE DIARIES or THE ORIGINALS?

PLEC: We’re having so much fun with the voice on this one. Damon Salvatore sort of had the market cornered on snark and hilarity on VAMPIRE DIARIES, and almost in contrast, we deliberately toned everybody else’s voice down. Caroline had a few good lines here and there, and people were allowed to be good-humored, but this is tonally much broader in that way. The voice is much more steeped in irreverence.

AX: Both THE VAMPIRE DIARIES and THE ORIGINALS have found new life online, through social media, through Netflix, things like that, and it’s gone from children using it on Tumblr to Instagram to Snap and everything like that, which is how long these shows have been on. How does it feel as a producer to see your characters and your lines being seen online by new generations, and maybe using them in memes or videos that weren’t the original intent?

PLEC: Look, any time the level of fan engagement is that profound that they are taking what we’ve done and creating God knows what out of it – fan fiction, Tumblr pages, tattoos, full-body tattoos – it’s an incredible honor. You feel bad for them, in that they’re stuck with that tattoo now for the rest of their life, and they might not be so excited about it in a decade or two, but it’s just a huge honor.

AX: Is there a particular character beyond Hope that we don’t know much about yet that you’re really excited for fans to meet?

PLEC: Oh, God. I’m honestly so excited for the first opportunity to parade the rest of these guys out here in front of you. They are delightful. Josie [Kaylee Bryant] and Lizzie Saltzman, the twins, M.G., the young vampire, Landon Kirby [Aria Shahghasemi], the young human who we met very briefly in Mystic Falls in Episode 12 of THE ORIGINALS this year, Rafael Waithe [Peyton Alex Smith], who is a new kid, new werewolf – they are incredible. They are so cool, and they’re such good kids, and their characters are so lovely, and damaged, and f***ed-up, but fun, and soulful. It’s a world that I’m having such a good time playing in. I honestly look forward to you guys meeting them, because they’re just a ball of energy.