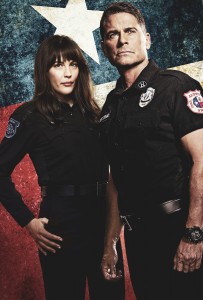 9-1-1: LONE STAR is spending its ten-episode first season in the Monday-night timeslot of its progenitor, 9-1-1. Both series are created and executive-produced by Ryan Murphy & Brad Falchuk & Tim Minear. Minear also serves as show runner on both shows, a position he shares on 9-1-1: LONE STAR with fellow executive producer Rashad Raisani.

While the original 9-1-1 is set in Los Angeles, 9-1-1: LONE STAR takes place in Austin, Texas. (The series does some location shooting in Austin, with the rest of production located in Los Angeles.) New York fire chief Owen Strand (Rob Lowe), who previously rebuilt his Manhattan fire station after losing all his people on 9/11, accepts the challenge of resurrecting an Austin fire department that has suffered a similar decimation. Shortly after arrival, Owen meets the local paramedics chief, Michelle Blake (Liv Tyler), and learns mid-emergency that in Texas, paramedics and not firefighters are in charge on an accident scene.

When asked during a Q&A session for 9-1-1: LONE STAR how the show’s location was chosen – after all, a show about first responders could be set almost anywhere – Minear first jokes, “We threw a dart at a map.” More seriously, he replies, “The thing that I think works so well on 9-1-1 is that kind of combination of blue sky and urban, like L.A. gives you everything, and Austin does as well. You have this sort of hipster culture. You have sort of Blue America in the middle of Red America. [Austin] has it all, and we just through we would do a barbecued flavor version of the show. It’s a taste of 9-1-1.

“The idea is to have the brand grow in a way that feels organic and natural. We didn’t want to jump into a new iteration of 9-1-1 until we felt like we had something that was part of the universe, but unique, and had something else to say. And 9-1-1: LONE STAR was built differently than 9-1-1 was built, because we had two-and-a-half seasons of 9-1-1. We sort of started a spectacle with 9-1-1. With 9-1-1: LONE STAR, we felt like we’d earned the good graces of our audience, and we build from character, and we build to the cases. Whereas on 9-1-1, we sort of started with the cases and built to the characters. So we’re sort of doing the inverse here, and it feels different, but it still feels like it’s part of the same brand.”

After the Q&A ends, Minear and Raisani remain for some follow-up discussion.

ASSIGNMENT X: Both the original 9-1-1 and 9-1-1: LONE STAR have fire captains who move into the main city from another state – Rob Lowe as Owen on 9-1-1: LONE STAR and Peter Krause on 9-1-1. Is that the best way into the story for you, or is there some other reason?

TIM MINEAR: It’s interesting, because Bobby’s story on 9-1-1 didn’t get told until many episodes in. We come in, and everyone’s in place, and really, Buck [Oliver Stark] is the newest character in 9-1-1. For 9-1-1: LONE STAR, we wanted to do more of an origin pilot. It just interested us to start in a place of gravity and tragedy, with the loss of a firehouse, and it made sense that a guy who went through 9/11 is the guy for that job. So it was a story that we felt like those elements came together for us to achieve the effect we were looking for.

AX: What’s different about setting the show in Texas?

MINEAR: We have a lot of writers from Texas.

RASHAD RAISANI: Yeah, I’m from Texas, and I grew up a brown person in Texas, and so this show has a particular resonance for me, because I think, as people were talking about, there’s a lot of preconceptions about people in Texas, and how they react to people of color, and people of different religious backgrounds, and political backgrounds. And I think there’s always some truth to stereotypes. So we play that, we don’t shy away from that, but the most important thing about this show is about people, as they do in Texas, and everywhere, and as I hope that we do more as a country, is putting aside our political differences, or our cultural differences, for the greater good, which is what all of these first responders do every day. 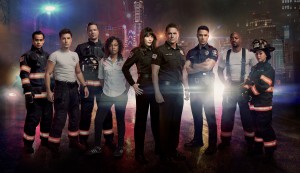 AX: Are we going to see any big procedural differences between Austin and L.A., besides the medical personnel taking the lead on an accident scene?

MINEAR: It’s interesting. You almost have to see the first couple of episodes to answer that for yourself. Because 9-1-1: LONE STAR, the concept of it is born from pain and loss and recovery in a way that we get to in 9-1-1. LONE STAR almost has a little bit of a heavier, darker feel in some ways. I mean, we’re looking for the fun as well. Like I said on the panel, is that, it’s built the opposite of 9-1-1, which started with frivolity and built to character, and LONE STAR is starting in this grounded character place, and building to the insane cases and the frivolity. At some point, we’ll hit the sweet spot of both shows.

RAISANI: Procedural differences – just by the fact that we’re in Texas, for example, we have an episode where a bull gets loose. The chances of the 9-1-1 L.A. crew ever having to deal with that situation, it’s a very different thing. We’ll always call our fire guys and say, “Okay, here’s the situation. A bull is loose. What do you do?” In Texas, they have procedures for these kinds of things that just aren’t as prevalent in L.A.

MINEAR: Yeah. We’re going to have the crazy cases, but interestingly enough, you’ll see in the first episode after the pilot something that looks like a zombie attack. There’s an exploding bull semen factory, which will be fun for the entire family.

RAISANI: It’s based on real cases.

AX: You have what looks like a tornado in your promotional poster. Will we see one of those?

MINEAR: All I know about right now is this year, and it just worked out perfectly, because we do ten episodes, and then we go on our winter break, and so we’re taking over our own timeslot. So we’re just going to keep 9-1-1 alive for twenty-eight episodes by doing it that way.

AX: You’re Twitter handle at least used to be #CancelledAgain. Are you thinking of changing it to #SpunOffAgain?

MINEAR: No, I might just change it to #IHaven’tSleptinMonths.

AX: What would you most like people to know about 9-1-1: LONE STAR?

MINEAR: That it’s 9-1-1, but that it’s its own thing. And that we think that it respects the original, and it creates its own space.