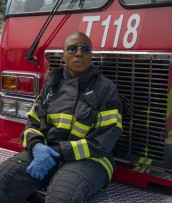 9-1-1: Aisha Hinds talks Season 2 and being trapped in a pipe – Exclusive Interview

The actor chats about the Fox first-responder drama 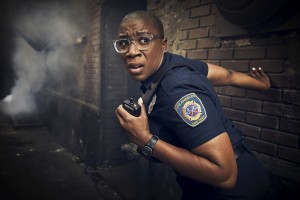 Fox’s Monday-night first-responder drama 9-1-1 is in its second season and has been renewed for a third. Aisha Hinds plays stalwart firefighter Henrietta “Hen” Wilson in the series, which is both set and shot in Los Angeles. This season, Hen has been trapped in a collapsed sewer pipe and through the start of a tense custody battle; she and her wife Karen (Tracie Thoms) are raising their young son Denny (Declan Pratt), who is the biological child of Hen’s ex Eva (Abby Brammell). (The battle ended abruptly when Eva died of a drug overdose.) Hen even got an entire episode, “Hen Begins,” dedicated to the start of her first-responder career.

Hinds, originally from Brooklyn, New York, has appeared in a great many TV series and films, including MR. BROOKS, STAR TREK: INTO DARKNESS, THE SHIELD, INVASION, DOLLHOUSE, TRUE BLOOD, WEEDS, DETROIT 1-8-7, CULT, UNDER THE DOME, NCIS: LOS ANGELES, SHOTS FIRED, and played real-life personages Underground Railroad “conductor” Harriet Tubman in the series UNDERGROUND and Voletta Wallace, mother of Christopher Wallace (the Notorious B.I.G.) in the miniseries UNSOLVED: THE MURDERS OF TUPAC AND THE NOTORIOUS B.I.G.

Next, Hinds will be seen in the upcoming feature GODZILLA: KING OF THE MONSTERS. Not surprisingly, she is sworn to secrecy about details of the movie until it opens.

ASSIGNMENT X: Can you say if working on 9-1-1 was good preparation for working on GODZILLA?

AISHA HINDS: The irony is that I shot GODZILLA before I started shooting 9-1-1. I was in the middle of shooting GODZILLA when I got the call for 9-1-1, and I flew back to L.A. for a day to meet with [9-1-1 executive producer/co-creator] Ryan [Murphy] and the team about 9-1-1, and flew right back into the production.

AX: Okay, was shooting GODZILLA good preparation for working on 9-1-1?

HINDS: It was [laughs], because there’s no greater emergency than Godzilla coming to town. So it was great preparation, just in terms of the technical aspects of things. It was wonderful preparation.

HINDS: [laughs] Any time I dare to have that feeling, a day comes up and I’m like, “Oh, oh, aha, this is high stakes here.” But it’s such a privilege that we get to do this thing, and we get to act, whereas the people who actually live this life, they do this day in and day out, and it’s not an act for them.

AX: Is it fun to have a scene where you’re the only person in it, like where Hen is trapped in the collapsed pipe, or is that claustrophobic and uncomfortable and awful?

HINDS: It’s invigorating. When they entrust you – because I feel like our writers, our producers, our creators, they trust me to tell a piece of the story that’s a little bit more interior, insular – you get this sort of adrenaline rush, being put in this predicament. So it was quite a lot of fun. I love to work with our crew, our camera operators, see them turn themselves into pretzels to catch the footage. So it was a lot of fun. 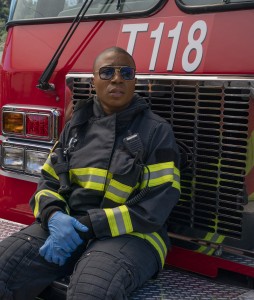 AX: Did you know Tracie Thoms at all before you started playing a married couple on 9-1-1?

HINDS: I certainly did. Tracie and I have been long-time friends, so the day that she had her meeting about it, she called and let me know that she was doing it, and I was like, “Ah, perfection!” And so I was so glad when she showed up on Day 1, because we already had a beautiful chemistry and trust with one another to take on the relationship of Karen and Henrietta.

AX: Hen had a one-night stand with her ex, Eva, which almost tanked the marriage. Did you have a personal take on that plot twist?

HINDS: I didn’t. All I knew was that – I told them, I was like, “Guys, if you don’t want Twitter coming for me, fix this.” [laughs] Because they’ve created this relationship, and this family. They’ve introduced Karen and Hen as a family, with Denny, their son, and then here goes Hen, falling off the hinge and getting back with her ex again. I was like, “Oh, no, you’ve got to protect the black family.” Especially black queer family. But our creators, our writers, they’re very focused on telling layered stories, complex stories, about humanity and the human heart. So it was kind of great to also go down that journey and see where people go authentically in that space. And Abby Brammell, who played my ex, was really incredible.

AX: Do you have a favorite scene or episode in what you’ve gotten to do so far in 9-1-1?

HINDS: It’s really looking great this second half of the season. I love that toward the end of last season, we peeled back the layers and got into some personal stories in a really intimate way. And so we’re doing a little bit more of that, but we’re also pushing the envelope even further in terms of the emergencies, and just building relationships with one another outside of the firehouse, finding ourselves having to rescue one another.

HINDS: I don’t currently. 9-1-1’s schedule definitely has me occupied. But once we go down for hiatus, I may try to get into something, if there’s time.

AX: And what would you most like people to know about 9-1-1 right now?

Article Source: Assignment X
Article: Exclusive Interview with Aisha Hinds on Season 2 and being trapped in a pipe